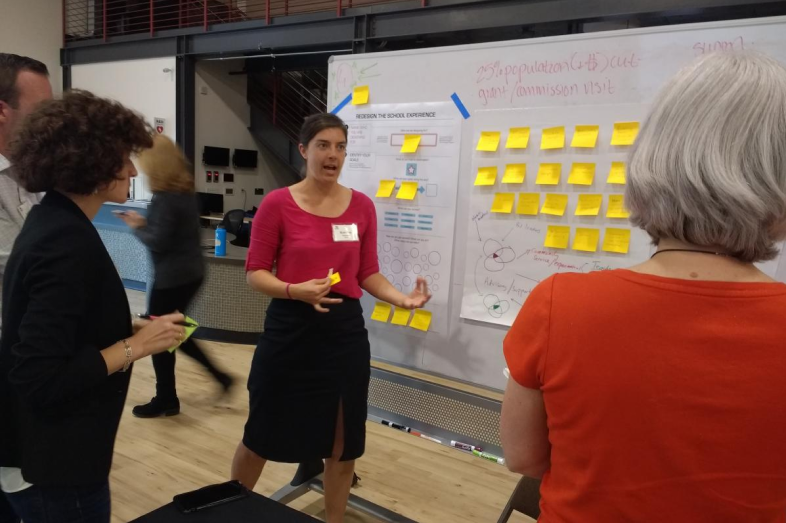 What You Missed at EWA’s Seminar on Rethinking High School

Education journalists from across the U.S. gathered this week in San Diego, on the campus of High Tech High, to explore efforts to rethink the American high school. Along the way, they heard from fellow reporters, as well as educators, analysts and students.

The journalists also went on student-led tours of High Tech High — a widely recognized charter schools network that emphasizes personalization, “authentic” student work, and ensuring a diverse student population. In addition, reporters teamed up for a hands-on activity in which they redesigned high schools.

Below is a sampling of the Twitter chatter from the seminar.

Pretty pumped to be at High Tech High in San Diego for #ewaHS to learn how to better cover high school innovation like the @HCS_AoH. pic.twitter.com/MsvlYx6QZO

The words that come to mind when a bunch of education reporters are asked about their most positive high school experience #ewaHS pic.twitter.com/1hdIYvbtWC

#ewahs @rewolfeJFF: Key to education is heart, hands and head. When we focus on one to the exclusion of the other is when we get messed up. (#OUSD supt. says this too.)

Good point by @BenjaminBHerold — always ask where the personalized learning push is coming from, who’s funding it #ewaHS pic.twitter.com/vbDwwgGvhB

Live-Streaming NOW: “How I Did the Story” with @BenjaminBHerold @lauraisensee & @StacyTKhadaroo . Get smart tips, story ideas on covering high school redesign. #ewaHShttps://t.co/CcyZIwrbuh

Cleveland has a school that operates inside MetroHealth hospital in the city. HOW COOL IS THAT. #AllinCLE #ewaHS

Excited for last panel of the day at #ewaHS bc it features some of the best experts on HS ——> students! pic.twitter.com/dlHbTePkWd

You know what’s great about listening to students talk about high schools? They use plain language about learning, no jargon at all. Thanks for having them #ewaHS

During our #ewaHS panel @rewolfeJFF talked about how @jfftweets examines impact of automation on jobs. So had to share this photo of robot that delivered my Thai food order 3 wks ago! (Burning question: How did robot spend $5 tip I prepaid thru delivery app?) pic.twitter.com/ixbcdwJt6u

Redesigning a school is no piece of cake! https://t.co/IG5poexRcK

Reporters: When educators say their school is innovative — personalized learning, competency based ed., etc — ask them to be ‘very very specific’ with a concrete example beyond the jargon, says @RANDCorporation‘s Elizabeth Steiner. #ewaHS

Thanks to all the students for sharing with us at #ewahs pic.twitter.com/w39taJvIGa