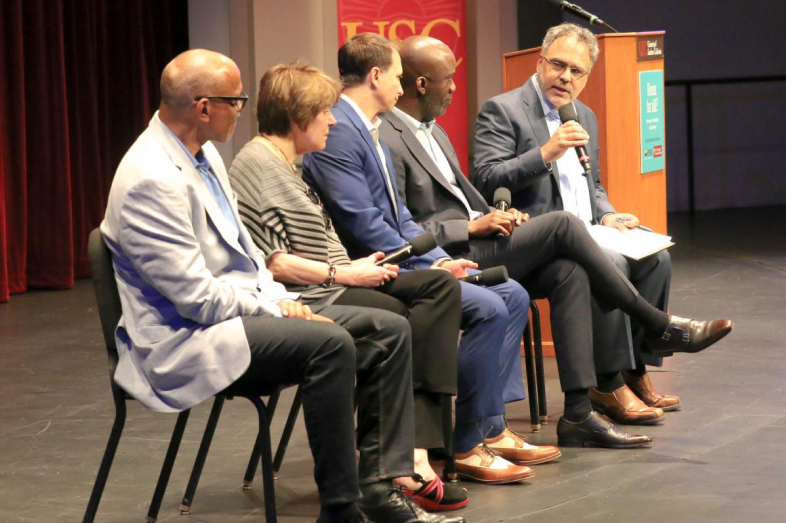 Why Race and Equity Matter in Education Reporting

Education journalists must think more critically about the ways in which race, ethnicity and gender play into the stories they tell, a panel of experts said at the first keynote session at the Education Writers Association’s national seminar in Los Angeles last week.

Shaun Harper, a professor at the University of Southern California, kicked off the session, “Big Ideas on Equity, Race, and Inclusion in Education,” with a keynote speech that encouraged reporters to see themselves as “teachers to the nation” who can help the public better understand — and accurately represent — diverse communities. After the talk by Harper, who is the executive director of the USC Race and Equity Center, additional experts joined him on stage for a panel discussion.

During his address, Harper encouraged reporters and editors to challenge the status quo and dig deep to produce compelling, accurate stories. Nuanced stories, he said, equip the public to address the most pressing challenges in educational inequality.

“I think education writers have a tremendous responsibility to the nation,” he said.

Harper presented a list of 10 story ideas for journalists. The first four were:

After Harper’s keynote address, EWA board president Greg Toppo moderated a panel discussion that dove into the topics to get additional viewpoints into the conversation. For this segment, Harper was joined by Pedro Noguera, an education professor at the University of California, Los Angeles; Estela Bensimon, an education professor at USC; and Michael Petrilli, the president of the Thomas B. Fordham Institute.

Toppo, a senior editor at Inside Higher Ed, asked each panelist to identify which of the ten ideas presented by Harper should be top of the list for busy education writers.

Bensimon named the mismatch between the race and ethnicity of students and faculty. There are too few faculty of color because of the problems surrounding the recruitment process, she said. People tend to default to hiring people who are like themselves, according to Bensimon. And university faculty tend to be judged using the metric of academic publishing, which is a problem because white academics tend to cite other white faculty, she said.

Segregation in schools is an old issue, but writers must continue to pay close attention to it because it has “a profound effect on politics,” Noguera said. And he urged journalists to consider the motivations for people who support particular policies. For instance, why are billionaires so interested in charter schools, which make up a very small portion of the nation’s school population, he asked?

Race remains an important issue, Petrilli said, and he urged writers not to shy away from it. There are no easy answers. He used the story of racial disparities in school discipline as one example. Explaining racial bias and the history is important, he said, but he does not think that explains all of the reasons black and brown students are suspended and expelled more frequently. He cited poverty and environment as other reasons that may influence these trends. Do not to turn conservative voices into one-dimensional caricatures, he said, because we need solutions, not polarization.

(Petrilli introduced himself as a conservative – a former Republican who became a “never Trump” advocate, and, eventually, he left the Republican party entirely after Trump’s reaction after racists and anti-Semites marched on the University of Virginia’s Charlottesville campus. Separately, Harper had his own connection to the UVA incident. The university invited him on campus to speak after it happened.)

After Petrilli finished speaking, he handed the microphone to Harper, who was next in line on the panel to talk.

“I was waiting for him to say something disagreeable – but he didn’t,” Harper said.

The case of Freddie Gray, who died in police custody in Baltimore, provides one example of the complexities around issues of race, Harper said. He was exposed to lead paint as a child, which was among the many variables that influenced the trajectory of his life. It is “responsible to tell the whole story” of people, Harper said.

The ‘Elephant in the Room’

“To avoid race is to avoid the elephant in the room – address it,” Noguera said.

The panelists also discussed news coverage about how black mothers, on average, die more frequently during childbirth than white mothers. (ProPublica, NPR and the New York Times have recently covered the topic.) Petrilli said he thought the stories were missing an important angle because they did not bring up the issue of marriage and single parents as a possible explanation for why black women are more likely to die during childbirth and postpartum. (His comments about black mothers brought audible gasps from the crowd, which included advocates and communications professionals along with journalists.)

There was a similar conversation about the dynamic of race in special education placements. Petrilli said that there might be reasons journalists and researchers frequently note that minority students are more likely to be identified for special education services. He pointed to 2016 research from Pennsylvania State University that challenged this notion and sought to explain the disparity in a way that went beyond the suggestion that white teachers were more likely to place black students into special education.

Despite differences of opinion on some policy matters, the panelists agreed on a broader point: News outlets need to provide more complete, richer narratives about what is happening in K-12 and higher education. Journalists can’t ignore race, and stories must be told completely and accurately, especially in a time when divisiveness rules many national policy debates.