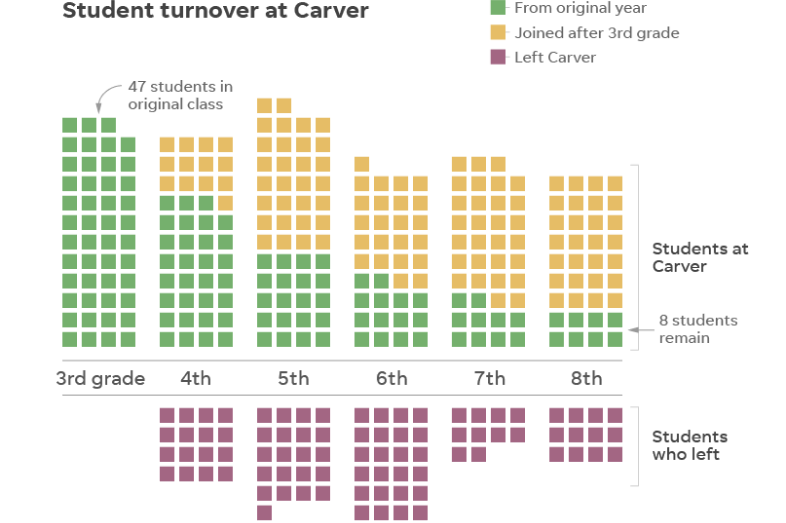 Why Tapping Education Researchers Pays Off

Reporters See Value in Teaming Up With Experts to Examine Data.

From test scores to graduation rates, the education system is a world of numbers that can show how well policies and practices are serving students – if you know how to analyze the data.

“When there’s a data session here and you have to pick which category you’re in, I would be in the beginner category,” said Adam Tamburin, a higher education reporter for The Tennessean, during a panel at the Education Writers Association’s 2019 National Seminar in Baltimore.

Tamburin and Erin Richards, now a national education reporter for USA Today, both teamed up with university-based researchers to carry out original data projects.

Richards, then a reporter at the Milwaukee Journal Sentinel, collaborated with Mike Ford, an assistant professor of public administration at the University of Wisconsin-Oshkosh, to produce “Lessons Lost.” That series is about the effects of high student mobility on Milwaukee schools. Tamburin, with support from an EWA Reporting Fellowship, paired up with Vanderbilt University professor Will Doyle for a report on college attainment gaps in a state that has been heralded as a national leader on the issue.

Here are some tips provided by Erin Richards during her presentation

But Richards couldn’t get the data on voucher schools. The state education department said she could only get student-level information through a research request, as academics nationwide do for data to use in their studies.

A light bulb went on. Richards called Ford, whose work she’d reported on before. He turned out to be interested in what happens to students’ standardized test scores after they switch schools.

Richards and the Journal Sentinel’s data reporter both completed a four-hour online Institutional Research Board training, giving them the ability to submit the research request with Ford.

The data showed that, on average in Wisconsin, one in 10 students change schools, but in Milwaukee that number jumped to 25 percent. At the lowest-performing schools, student mobility typically exceeded 30 or 40 percent, Richards said.

And Ford found that switches between public and voucher schools generally resulted in lower test scores the year after the move.

Tamburin began his project after covering the nationally lauded Tennessee Promise free-college initiative. Statewide, college retention rates were high, but Tamburin wanted to see where the gaps were.

He already had a professional relationship with Doyle, who helped him merge data from the state, the U.S. Census Bureau and the federal Integrated Postsecondary Education Data System, known as IPEDS. The researcher and reporter were able to quantify college attainment by ZIP code and produce an interactive map.

“Surprise surprise, the ZIP code with the highest attainment rate is the most affluent one in the state,” Tamburin said. But they found real surprises too: parts of the state where attainment was unexpectedly low or high, which they realized related to the locations of college facilities.

“It helped us tell angles of the story that we wouldn’t have known just sitting in our offices in Nashville,” Tamburin said.

Talking About Margin of Error

Education reporters are no strangers to research and often report on others’ findings. “We’re talking about the difference between reporting on data that’s produced by somebody else and actually linking arms with somebody to produce original research,” Richards said.

In partnering with researchers, she and Tamburin both had to reconcile differing methods and standards.

As a condition of the research request, Richards had to get the state to approve any graphic that could identify a student, and the Journal Sentinel had to store the data on a secure server. That meant a graphic the newspaper hoped to produce tracking one student’s path from school to school was quashed. The state deemed it would be too easy to identify that particular student.

Initially, it seemed switching schools had a huge impact on students’ test scores, but Ford wouldn’t draw a conclusion until he did a regression analysis and controlled for factors such as income and race.

“I was really eager to just take the numbers he gave me and run with them, and he wanted to talk a long time about margin of error,” Tamburin said.

Richards said she and Ford benefited from their partnership in different ways. She got a story out of the data; he got a paper, which she in turn reported on. (The paper is under review for publication, but to obtain a copy of the preliminary version, journalists can email Mike Ford at fordm@uwosh.edu.)

Their tips to reporters included knowing what you want to do and what data exist before approaching a researcher about a collaboration, especially if you don’t already have a relationship with the academic. Both panelists said to expect a lengthy process – Tamburin recommended allowing a month more than you think you’ll need.

“Professors, they’re just like us,” Tamburin said. “They sometimes miss deadlines and they take a long time and they’ve got a lot of other responsibilities. It’s our job to bother them all the time, but they have other things to do.”

Richards said she would consider collaborating again with a researcher in the future.

“I think it takes the right kind of project,” she said.