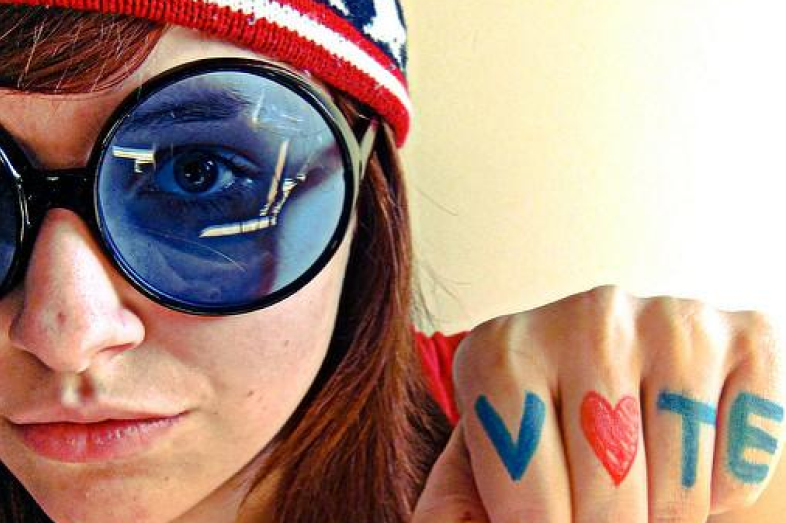 Why the Youth Vote Matters in Presidential Elections

In her first election, 19-year-old Melissa Kelley voted for Hillary Clinton. “There’s a million reasons” why, she said. “Donald Trump is just so anti-everything I believe in.” Kelley’s causes? A woman’s right to choose an abortion, Black Lives Matter, refugees and the environment.

But don’t take the American University sophomore’s comments as a sign the entire youth vote backed the former secretary of state and senator. A national exit poll suggests more young adults in 2016 than in 2012 “supported a third-party candidate, did not vote for a presidential candidate, or specifically chose not to answer this poll question,” according to the Center for Information and Research on Civic Learning and Engagement (CIRCLE).

Though voters ages 18-to-29 skewed liberal, more than a third did not: Fifty-five percent of young voters chose Clinton, down from the 60 percent that backed Obama in 2012, while 37 percent chose President-elect Donald Trump.

CIRCLE researchers held a press call Wednesday to unpack some early data on the youth vote, which accounted for 19 percent of the ballots cast nationwide — the same percentage as in 2012. “Young voters were a substantial voting bloc and they influenced the outcome, although a majority of them ended up on the losing side of the presidential race,” said CIRCLE director Kei Kawashima-Ginsberg from her office at Tufts University in Medford, Mass. 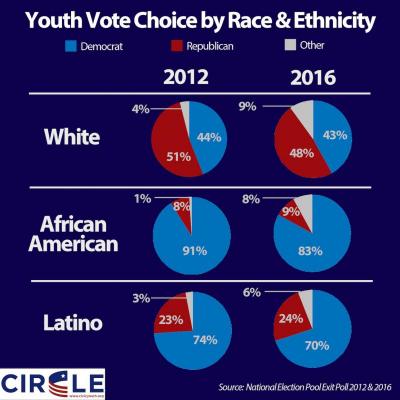 ∙​In Michigan, a state considered essential to Clinton’s “blue wall” of electoral support, the youth vote was the only age group to favor Clinton over Trump — who ultimately won the state.

∙Trump and Clinton split the youth vote in Iowa, with each receiving 45 percent. Clinton was favored by the youngest voters (ages 18-24) while voters aged 25-29 strongly supported Trump.

When reporting on these data, it’s important to remember that the “youth vote” encompasses a diverse group of voters, and generalizations about them should be avoided. An 18-year-old and a 29-year-old might have supported the same candidate but their reasons for doing so can be, and often are, very different.

“Young voters supported Hillary Clinton and other Democratic candidates more than any other age group did,” Kawashima-Ginsberg said. “However, they are a heterogeneous generation, and their choices differed greatly depending on their own race, their state, and other factors.”

That’s no solace to Clinton’s young supporters. “I’m just really still in shock,” Kelley said, “and nervous for the future.” While she admittedly reads left-leaning news sites and surrounds herself with friends who are also Democrats, she said she didn’t realize that people in other parts of the country felt so differently.

One common trait of younger voters, according to CIRCLE researchers, is they tend to put greater stock in the causes they care about rather than the appeal of a particular candidate’s personality.

That was certainly the case for Cassandra Behler in Ann Arbor, Mich. Behler, 19, works between 50 and 60 hours per week at two jobs, and takes classes in literature and anthropology at Washtenaw Community College — when she can afford it. While crafting lattes and washing dishes Tuesday afternoon at a local coffeehouse where she’s a barista, Behler said she would be voting for Clinton, after having first supported Bernie Sanders. Trump’s policy stances made him an impossible choice, she said.

“I don’t think the personalities of either candidate is appealing,” Behler said. “But (Clinton) is the most progressive candidate. Even when Trump says ‘I want to make to make America great again’ he really means he wants to rewind time.”

Behler added that she had tried to convince some of her friends not to follow through on plans to support a third-party candidate: “That’s just a waste of a vote.” Some of them didn’t intend to vote at all, which disappointed her. National exit polling data showed that 8 percent of 18-to-29-year-olds backed neither candidate on Tuesday.

“This is about who do we want to be the face of our country,” Behler said. “I don’t want that face to be Donald Trump’s.”

Her frustration was echoed by 18-year-old Ethan Aliste, a freshman at Santa Monica College, a community college near Los Angeles. Aliste researched the statewide ballot measures in addition to the candidates and considered himself fairly well prepared for his first trip to the polls. But he says some of his friends were more apathetic about the political stakes or claimed registering to vote was too difficult.

He tried cajoling them to register and vote by discussing the debates with them, he said. “And frankly, they don’t like either of the candidates either, so for them it’s a matter of ‘Oh, I’m not gonna vote, doesn’t matter if I voted anyway, it’s not gonna count,’” Aliste said Tuesday in an interview at a polling place in the Palms neighborhood of L.A.

Other 18-year-olds spoke of a large concentration of friends who voted. Rami Mamita, an Eagle Scout who turned 18 yesterday, said in an interview that of the roughly 20 friends of his who were old enough to vote, 13 took part in the elections. Mamita, a senior at Santa Monica High School in California who wants to become a doctor, said taking AP Government helped him stay abreast of the news. “Definitely a majority” of what he knows about the election is because of this class; the teacher assigned weekly viewings of “Meet the Press” followed by a quiz and class discussion.

In his studies, he found some stark differences between this year’s presidential campaign and past ones. “There was a video of a debate between Romney and Obama; I looked at it — it was much more civilized,” Mamita said. “They spoke in a much more formal manner. And I compared it to now, it’s just amazing.” Green issues like the environment and public transit matter to Rami, but his interests are global, too: He has two dozen family members in Syria. “Some of them died from grenades, gunshots; so we just look at that issue really seriously and see which president would be able to contribute to these conflicts, resolve them, rather than create even more tension,” he said.

Having arrived from Cuba at age 12, Jessica Valdes became a U.S. citizen a few years ago. Now a junior at the University of Florida, Valdes voted early last Friday in Gainesville for Clinton — the presidential candidate with the best proposals for immigration and education policies that would affect her personally, Valdes said.(A poll about a week before the election showed Trump’s support among Cuban-Americans in Florida at 52 percent.)

The issue of most importance to Valdes was immigration reform and a plan that would provide a path toward citizenship for undocumented immigrants. She has many friends who also entered the country as children and are now recipients of Deferred Action for Childhood Arrivals (DACA) — a program that allows some undocumented individuals who entered the U.S. as children to stay in the country without the risk of deportation.

“There are certain groups of people whose lives are really at risk,” Valdes said. Clinton “wants to give (immigrants) the opportunity to achieve the American dream.”

Of the two candidates, Clinton was the most informed and “willing to work with minority people in the United States,” she said. She also valued the former secretary of state’s plans for making college more affordable.

Valdes, who’s majoring in political science, stayed up-to-date on major races through social media, CNN and the New York Times. She was doing research on local races with her phone up until the time she voted.