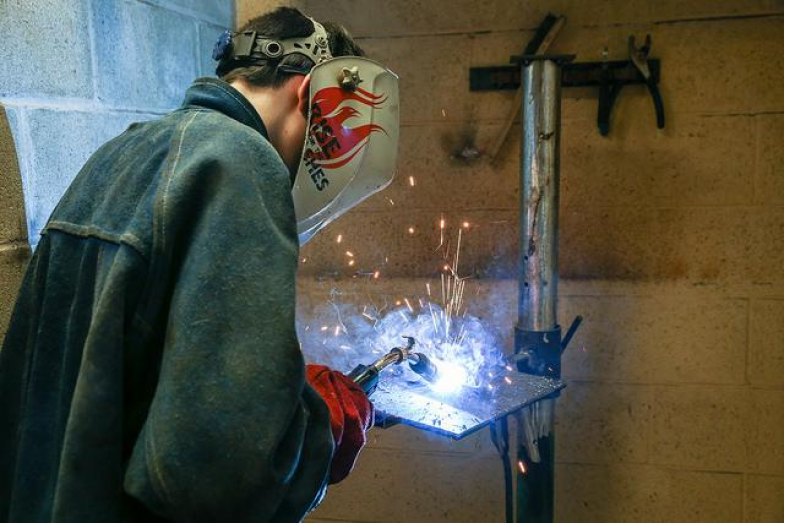 Word on the Beat: Career and Technical Education

“Word on the Beat” is a regular feature of The Educated Reporter, breaking down the buzzwords and helping you understand the issues of the day. Send your suggestions to erichmond@ewa.org

Word on the Beat: Career and technical education (CTE).

What it means: CTE is a revamped approach to old-school vocational education, which typically splits students off from their college-going peers. Now, a growing number of high schools give equal time to academics and career training — in everything from traditional trades like plumbing and automotive repair to health sciences and renewable energy. Some traditional campuses, while not switching over to a full-scale CTE model, are ramping up their vocational offerings to give students at least some exposure to workforce development. Strong performers can be found across the country, stretching from New York City’s Aviation Academy to Palisades Charter High School in Los Angeles. Studies have found that CTE students are less likely to dropout, are more likely to graduate high school, and many of them complete postsecondary education. The federal Perkins Act provides funding for CTE, focused on high schools and community colleges.

Why it matters: Amid its burgeoning popularity, there are legitimate concerns that enrollment in vocational programs skew too heavily toward students of color and those from low-income households — young people whose opportunities are often already limited. That, in turn, can funnel disadvantaged students away from the highest-paying career paths, some critics contend. (For more, listen to “The Troubled History of Vocational Education” by APM Reports’ Emily Hanford.) But studies have also found those same historically underserved groups often thrive in high-quality CTE programs, and many of them continue their educations beyond high school. Even exposure to one or two CTE classes can have a positive impact on students, according to recent study published by the peer-reviewed American Education Research Association’s journal: dropout rates were lower and graduation rates were higher, even if students weren’t more likely to go to college. The growth of CTE has raised equity concerns, as some schools use gated enrollment policies that mean the seats don’t always go to the students who might benefit the most. And the quality of CTE programs varies widely across the U.S., experts say.

Who’s talking about it: There’s strong public support CTE. In a recent PDK poll, 86 percent of respondents said high schools should offer “certificates or licenses qualifying students for employment in specific fields,” and 82 percent were in favor of “job or career skills classes in place of academic classes.” CTE is one of the rare areas of bipartisanship in Congress right now. The reauthorization the legislation that governs and funds such programs is underway, and a bill has already passed the House. At a recent speech to the U.S. Conference of Mayors, Education Secretary Betsy DeVos decried “the disconnect” between the nation’s K-12 schools and the nation’s economy, adding that “across states and industries, there are 6 million job openings, as the “blue collar” jobs of yesterday become the “blue tech” jobs of today … those jobs require specific skill sets and customized certification.” Education Week’s Politics K-12 blog put CTE on its shortlist of education issues that could get a shoutout in President Trump’s first State of the Union address.

Want to know more? The National Association for Career and Technical Education tracks state-level policy and offers regional resources for reporters to tap. Andy Smarick, an education policy analyst with the American Enterprise Institute, argues that now that the Every Student Succeeds Act has given states far more discretion over school accountability, that could be a boon for CTE. States now have more leeway to define student success, explains Smarick: “Early signs show that states are using this new flexibility to allow districts to elevate CTE. And that could lead to more CTE-focused schools, CTE courses, and CTE course-taking by students.” An analysis of state’s ESSA accountability plans found 36 states had indicated that a “well-rounded education” should include CTE training supported in part by federal funds.

And even more! A recent report by the Center on Education Policy at George Washington University looked at the role career education programs can plan in developing students’ skills in essential areas like collaboration and problem solving. We examined states’ investments in CTE during a session at EWA’s National Seminar last spring. And we’ve looked at CTE in a global context, and what the U.S. could learn from high-performing programs in other countries. (Matt Barnum of Chalkbeat dug into new international research on a potential downside to CTE: employees who are less able to adapt to new work demands as industries evolve.) And in a recent piece for The Atlantic, Kelly Field looked at why female students were still choosing — or being steered to — vocational fields with the lowest paychecks.