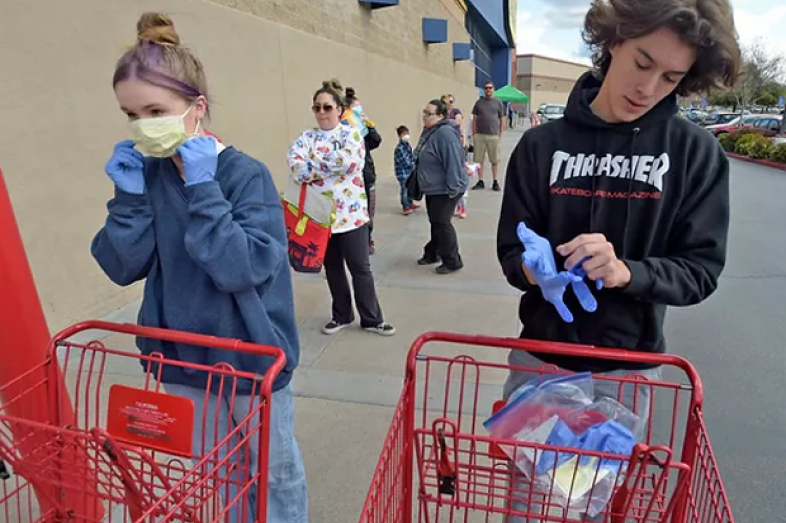 ‘Amplify their voices,’ and remember this may be their first media experience.

When high schoolers Eric Luo and Zoe Monterola saw how inaccessible grocery delivery services were for at-risk populations in their hometown of Santa Clarita, California, they knew something needed to be done.

“Seeing people pay hundreds of dollars just so people can grocery shop for them … these issues affect us. That’s something that we can change,” Zoe said.

In response, the teens founded Six Feet Solutions, a nonprofit that delivers supplies like groceries, emergency items, and other in-demand products to those who need it most. They’ve since expanded their services to online tutoring, physical and mental wellness, and more.

“We just wanted to be there for the people in our community,” Eric explained.

And they’re not the only ones. Amidst the colliding crises of a global pandemic, economic meltdown, and a national reckoning with systemic racism, youth activists across the country have taken to the front lines to make a difference in their communities. Zoe and Eric joined five other young changemakers at EWA’s 73rd National Seminar to speak with education reporters about their conflicting goals and experiences in working with the media. While they know media attention can boost their impact, some are leery about reporters oversimplifying or misrepresenting them. They suggested several different strategies that reporters can use to more fully and fairly incorporate youth voices in their stories.

How to Find Youth Activists

Without the time commitment of sports and extracurriculars, students around the country have more time to focus on being active participants in their community. “I think a lot more people are also looking for a way to make change, a way to spend their time,” said Toby Paperno, who is involved with the nonprofit Teens Take Charge, which advocates for educational equity in New York City’s public schools, when they recognized the differences in resources and opportunities available between schools in the district.

Stephanie Pacheco, another activist with Teens Take Charge, said the best way to find those young activists is to go where the action is — rallies, protests, organization meetings. With COVID-19, however, finding them in-person might not always be an option.

That’s why the teens recommended researching equity-focused clubs and organizations in local schools and directly contacting school administrators to find student leaders. “Reaching out directly to the schools, skipping all the middleman stuff: I think that’s a way to really reach out to students,” advised Brandon St. Luce, who also works at Teens Take Charge.

Reaching out directly can also allow reporters to find students often left out of the conversation, especially those who might not have access to the internet. Every student has a different story to tell and may not know how or where to get that message across. “Amplify their voices and give them a platform and allow them to make change in their communities,” Stephanie said.

After that initial connection, it’s important that journalists take time to know young activists and not assume their motivations. For Zoe and Eric, the impact of the pandemic on their community sprung them into action. For the others, their reasons for getting involved might vary, and it’s important not to represent them as a monolith.

In Milwaukee, Kris English and Keashun Lawrence wanted to inspire other youth of color to speak up and be more active in their community. That mission drew them to Leaders Igniting Transformation (LIT), an organization that mobilizes young people of color through issue organizing and civic engagement.

Students, like all sources, might have different goals than reporters. Explore their motivation for working with the press, and be transparent about your own goals and expectations. When journalists misrepresent a group’s message or ask targeted questions (whether intentionally or inadvertently), “it can create animosity between other people in our community,” Keashun said.

Remember, this may be the first time a teen is interviewed by the media, and they could feel distrustful of you as a reporter. To make sure they feel empowered in the conversation, check out this EWA blog post for helpful tips when interviewing adolescents.

Writing Their Stories With Accuracy and Nuance

As young activists in such unusual times, these teens are learning a lot about what it means to adapt and be proactive.

Zoe’s biggest challenge has been giving herself grace when she realizes she’s wrong or changes her opinion. She wants other young activists to know that’s normal. That’s why she says reporters have to show the full process of organizing, not just the “highlights reel,” as she puts it. That includes the small day-to-day struggles and late nights up working. “I think highlighting that is just as important as the finished product, especially to help engage and inspire more civic engagement really anywhere,” she said.

In adding that nuance, journalists can avoid oversimplifying or stereotyping the hard work and lessons learned through organizing. It allows room for young activists to grow and change as they explore civic engagement for what might be the first time. As Kris said: “Activism was really one of those ways to inspire young people and also myself.”