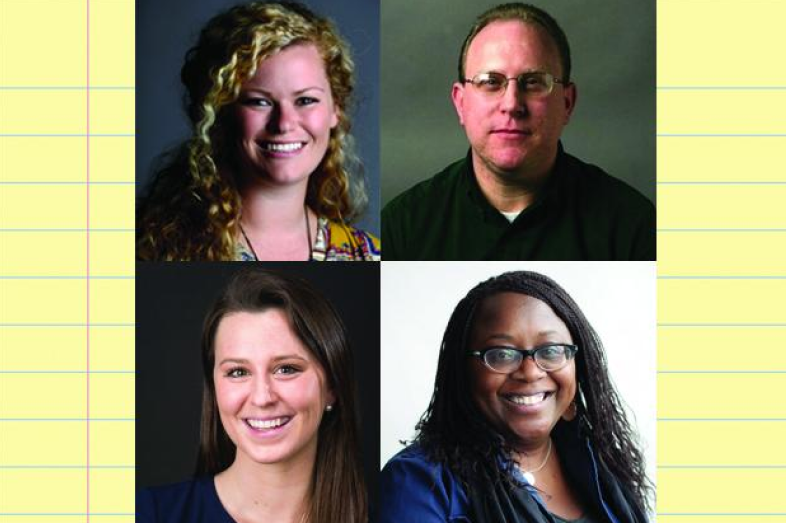 Collaboration, Patience, Empathy: Higher Ed Reporters Share ‘How I Did the Story’

In 2018, Meghan Irons and her colleagues at the Boston Globe set out to document a troubling paradox: Their city is famous for its world-class universities, but working-class Bostonians were largely failing to thrive there and move up the economic ladder.

To investigate this puzzle, the reporters decided to trace the lives of Boston’s very best students – the valedictorians who had graduated from the city’s public high schools a decade ago, Irons explained during a panel discussion on standout higher education stories at the Education Writers Association 2019 National Seminar.

Finding the city’s academic stars turned out to be surprisingly difficult. Few of the valedictorians had an online presence, Irons said. So reporters resorted to “extreme means” to find them. Using backgrounding tools such as Accurint, they contacted and requested assistance from people likely to know the valedictorians, such as grandmothers and landlords. One reporter even traveled to the Japanese island of Okinawa.

The resulting series showed that despite graduating at the top of their class, one in four valedictorians failed to earn a bachelor’s degree within six years. “The students were on their own and were flailing. Some of them just couldn’t really make it,” said Irons.

The stories also illustrated the importance of old-fashioned, shoe-leather reporting, even in the social media age. It was just one of the lessons shared by the four journalists who presented their work at the panel. Some other top takeaways:

Collaboration was key to the success of ‘The Sex Talk,’ The Cincinnati Enquirer’s powerful series of video interviews on campus sexual assault.

“A lot of times writers just think about, ‘Here’s the story I want to do, and OK, photo, what can you get me to add to this?’ ” said higher education reporter Kate Murphy. Instead, Murphy—who had little video experience—and visual journalist Meg Vogel worked together to shape the project from the beginning.

“Meg asked just as many questions in the interviews as I did,” said Murphy. “We cut the transcripts up and storyboarded every single video as a team.”

Think in advance about the impact you want your story to have.

Murphy and Vogel knew they wanted to create a resource that could also be used in college classes, sorority recruitment and new student orientations to spark conversation among people on all sides of the issue. Their 24 interview subjects ranged from a university Title IX coordinator to a student accused of sexual assault, and they kept the production spare, to focus on the interviewees’ emotions. An Instagram version included vertical videos that students could easily view on their phones.

These efforts paid off: High school teachers, college professors and residential advisors have all contacted the team to let them know they’ve added the videos to their curriculum, Vogel said.

Regular public records requests are your friends—and you never know when they’ll come in handy.

When USA Gymnastics doctor Larry Nassar was accused of serial sexual abuse, the Detroit Free Press’ David Jesse faced the challenge of covering a major national story in his own backyard. While the Free Press’ sister paper in Lansing reported the play-by-play of Nassar’s trial, conviction, and related court cases, Jesse and his editors chose to focus on how the administration at Michigan State—Nassar’s employer—had handled sexual assault cases.

Jesse was able to use public records he’d requested in the course of covering his beat, such as the contract for former Michigan State President Lou Anna Simon, to provide context for his readers when news broke.

“Look for employment contracts, look for financial documents,” said Jesse, this year’s recipient of EWA’s top prize for beat reporting. “Make sure you get it on a regular basis, so you have the most up-to-date [information].”

Even haters can be won over.

One University of Cincinnati student had sent Murphy angry emails after she covered sexual assault allegations against a friend of his, Murphy said. “He questioned my journalistic integrity and was like, ‘You’re lazy, you’re a terrible reporter,’ ” said Murphy. “I reached out to him when we were doing this project and was like, ‘Hey, Cal, you want to talk to us about this issue that you clearly have strong feelings about?’ ”

The student ended up participating in the project, Murphy said, adding another dimension to the conversation.

Don’t forget that your subjects are real people.

In one story, Jesse said, he relied heavily on documents shared by a source to show that Michigan State administrators long had concerns that Nassar’s boss, a university dean, was also engaging in sexual misconduct. But what made the story compelling was the willingness of a former student who said she was groped by the dean at a fundraiser to talk about her experience, Jesse said.

“As much as it is easy to just use documents,” he said, “there are human lives here that are being affected.”