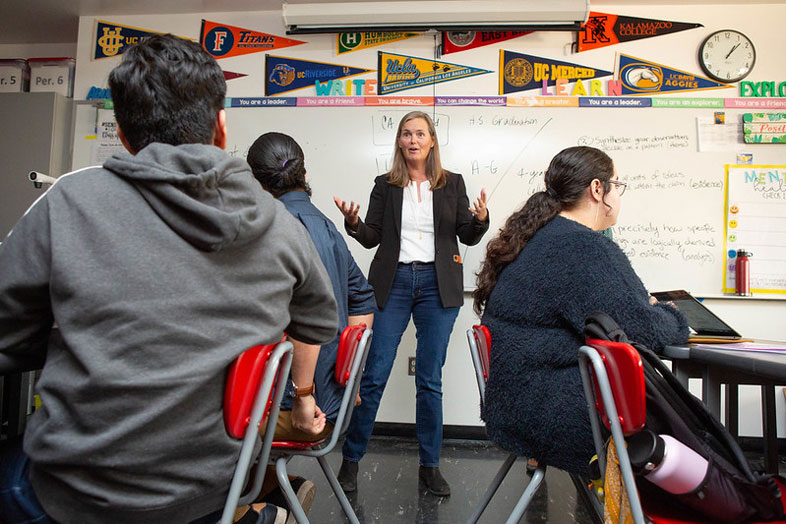 ‘Sexy headlines’ about the latest education controversy often grab attention. Learn why reporters shouldn’t limit their coverage. Plus, get research and the history of parent engagement in education.

A new generation of parent activists has arrived, and its members are far more concerned with “ballot boxes, legislative agendas and school district policy priorities than bake sales,” according to a new report from the public policy think tank FutureEd.

But that’s often where the similarities between parent advocacy groups end. How they organize, who they represent and what they’re pushing for vary widely—and those with the deepest community roots aren’t always the ones making the most noise.

“The COVID crisis added a conservative strand to the parent movement, spawning groups … opposed to mask mandates, vaccines, and district attempts to confront issues of race, gender and sexuality in schools,” the FutureEd report, published in April, says. Those agendas often “put them in direct opposition to parents pursuing educational equity.”

But the authors of the FutureEd report—journalist, author and former EWA board president Greg Toppo, journalist and author Jo Napolitano, and FutureEd director Thomas Toch—cautioned against writing off heightened parental activism as “just the latest skirmish in the nation’s culture wars.”  They argue the speed and success with which some groups have expanded into national organizations with numerous local chapters instead points to a “permanent change in the education policy landscape.”

Here’s a closer look at the origins of this new wave of parental advocacy, and how to cover it thoughtfully.

How Did We Get Here?

For years, parent-teacher organizations were the primary outlet for parents wanting to get involved in their children’s schools. Historically, PTAs and PTOs were predominantly white and suburban, according to FutureEd, and often focused on fundraising campaigns and community events.

While the national PTA remains more than 3 million members strong, membership has declined precipitously since its 1966 peak of 12 million. Some parents told FutureEd they felt the PTA wouldn’t take on “hard fights”’ and sidestepped issues critical to underserved communities in favor of non-confrontational positions. Other parents took issue with limitations placed on local chapters’ autonomy.

As a result, alternative parent groups began springing up throughout the country well before the pandemic, “propelled by the rise of video conferencing, social media, and millions of dollars in backing from foundations,” according to FutureEd. COVID-19 only intensified parent involvement “by turning kitchen tables into classrooms, stoking parents’ frustrations with school closings and online learning.”

Those parents expect to remain engaged, too: In 2021, 93% of parents who responded to a national survey by the nonprofit Learning Heroes said they expected to be just as involved, if not more involved, the following school year.

So, How Do I Cover This?

First, do your homework.

If you come across a group you’re unfamiliar with or notice a contingent of parents suddenly materializing to speak on a particular issue, it’s time to start digging. It may sound like Reporting 101, but important backgrounding can sometimes fall by the wayside when on a tight deadline.

Longtime education reporter Rebecca Klein, who recently took a detailed look at the National Parents Union, said she prioritizes understanding the “origin story” of any group she explores.

“What are their funding sources? How did they come about?” Klein said. “Did this come about as a result of a real grassroots effort, or was this some other national organization or statewide organization that might have a vested interest in backing a specific group?”

The Walton Family Foundation is a major funder for the National Parents Union, Klein’s story notes, as is the Chan Zuckerberg Initiative. (Walton also provides financial support to EWA.) The Carnegie Corporation of New York, another EWA supporter,  has recently provided grants to NPU as well.

Beyond “finding out more about the key individuals involved,” Klein said, it’s essential to speak with community members about whether they believe a group is authentically representing their interests, and whether they can offer additional history or context to  inform your reporting.

“Obviously, it is a matter of context, but also fact-checking if you have the resources and ability to do so,” Klein said. “So many of these soundbite things (involve) people making pretty outrageous claims, and a lot of these things are provable or disprovable.”

Go beyond the latest controversy.

Explosive school board meetings and legislative fights involving critical race theory, LGBTQ issues, social-emotional learning and vaccine requirements have dominated recent headlines. Conservative parents have been at the forefront of those efforts, with groups like Moms for Liberty and Parents Defending Education among the most prominent.

While reporters shouldn’t ignore those parents, particularly if their concerns are being reflected in district- or state-level policies, it’s imperative to ensure coverage of parent activism isn’t limited to the loudest groups.

Often, parents in low-income communities, parents of color, and parents of children with disabilities have been quietly pushing for change for years, yet haven’t enjoyed the same level of media attention.

“I have seen teachers unions get covered. I have seen suburban moms get covered. But when it comes to underserved communities and parents in those communities, we barely get coverage,” said Sarah Carpenter, executive director of Memphis Lift, which represents families with children attending low-performing schools. (Memphis Lift also has received numerous grants from the Walton Family Foundation.)

That may be because issues prioritized by groups like Memphis Lift, from food security and reliable transportation to restorative discipline and mental health support, often make for less sexy headlines. But that doesn’t mean they’re any less important.

“The families that we work with every single day, the average income is $10,000 to $29,000 a year,” said Stephanie Parra, executive director of Arizona-based nonprofit All In Education, which focuses on improving outcomes for Latino students. “They’re concerned about their kids getting a high-quality education. They’re also concerned about access to the economy, keeping food on the table, [and] keeping the lights on.”

“I think that the media’s role in this is to really make sure that there’s a diverse perspective in whose voice is heard and whose stories are lifted up,” she said.

When reporters do cover the efforts of marginalized communities, they often “write about us without talking to us,” Carpenter said. She said she has frequently seen media outlets interview administrators or academic experts about what children need and never actually talk to their families.

“You have to go to the communities where the people are,” she said.

“Low-income families of color have something to say when it comes to public education in America,” Carpenter wrote. Among her key points for journalists: “Treat us as you would all other sources.” She also encouraged reporters to “understand that you are powerful and, as a result, you are either a part of the problem or a part of the solution.” (The open letter was republished by The Grade, a blog on education journalism.)

Like Carpenter, Parra said she had observed persistent stereotypes about marginalized communities among education and media leaders, particularly “that our families are not involved or not engaged, that there’s a lack of interest or a lack of commitment.”

“That’s just simply not true,” Parra said. “Our parents are as committed as any other parent to making sure that their children are successful.” The difference, she said, is that they face more barriers to participation.

Parra recalled reaching out to Spanish-speaking parents in May 2020, for example, and finding out she was the first person to have communicated with them in-depth following the school closures that had begun three months prior. Parents also have spoken to her about missing parent-teacher conferences not because they didn’t care about their students’ progress, but because they didn’t have reliable transportation or child care.

“As education professionals, we have to create systems of support for families to be included, rather than just making the assumption that they are too disinterested or that they don’t care about their children’s education,” she said.

Reporters should do the same. Those who want to build deeper relationships with parents should offer to work around their schedules and eliminate other logistical barriers, if possible, to make sure they’re heard.

Reporters trying to establish trust in certain communities also must be willing to be upfront about what they don’t know.

Karla Phillips-Krivickas, an education policy expert and parent of a daughter with Down syndrome who advocates for students with disabilities, said journalists frequently seem “afraid of saying the wrong thing or using the wrong word” when it comes to interviewing members of the disability community and their families. They avoid those conversations as a result.

While it’s crucial to approach such interviews with thoughtfulness and sensitivity, it’s just as crucial to be honest, according to Phillips-Krivickas.

“It’s about letting parents know, ‘‘Hey, I apologize if I say something wrong, but I really want to learn more about this issue or your experience,” she said.

Phillips-Krivickas and others—while conscious of deadline constraints and shrinking newsrooms—also cautioned against pushing parents to tell their stories before they are ready, rushing them once you get them on the phone or in person or having them recount emotional experiences for one story and then disappearing.

“Oftentimes, the parents that you end up hearing from, regardless of what the issue is, they’ve gotten to a certain point where they’re exasperated and are just done,” Phillips-Krivickas said. “It’s not just one little thing that happened. It’s been years of having to fight for our kids.

“So when you ask these questions, just know that sometimes, you’re going to get a lot. Because it took a lot to get them to that point.“

Share
Author
Maria Polletta
of Arizona Center for Investigative Reporting
Related Skills
Investigating the Pandemic’s Effects on America’s Youngest Learners
How an EWA Reporting Fellowship helped me (Alia Wong) better understand whether and how COVID’s unpredictability, stress and isolation undermined kids’ development
How to Cover Indigenous Students Authentically and Accurately
Native reporters and educators provide tips for covering Indigenous students amid critical race theory claims, renewed efforts to teach Native history, and some state rollouts of reduced or free colle
The Student Mental Health Crisis: Resources for Reporters
Featuring recent interviews with education journalists and experts who discussed the nation’s student mental health crisis at EWA’s 2022 National Seminar, this report helps reporters better cover
A Tale of Two Math Terms: An Infographic Story About When to Use Percent Change vs. Percentage-Point Change
Meanville, USA, was an average American town. Until one day, a local journalist had to figure the best way to explain how town administrators planned to spend a sudden windfall ...
Percent Change Versus Percentage-Point Change: What’s the Difference? 4 Tips for Avoiding Math Errors
Many people get 'percent change' and 'percentage-point change' confused. Use this tip sheet, featuring insights from data journalism pioneer Jennifer LaFleur, to get it right.
Load More
x