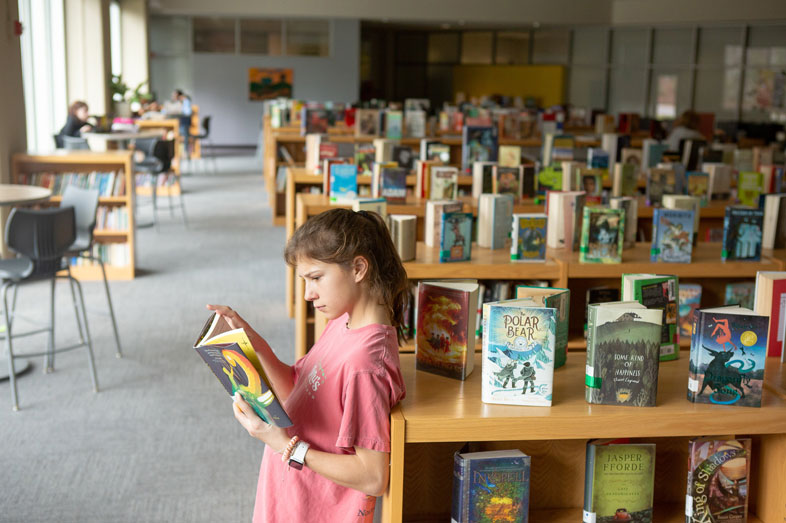 How to Better Cover LGBTQ Students in the Pandemic Era of ‘Don’t Say Gay,’ Book Bans and Other Issues

This deep dive catches reporters up on the legislation and issues affecting LGBTQ students. Read this main story and two other related pieces to improve your coverage.

Ranging from “Don’t Say Gay” laws to bans on transgender students’ participation in sports and on gay- and trans-themed books in schools, a record 238 anti-LGBTQ bills were filed in U.S. statehouses during the first three months of 2022. Even before the first were signed into law, the new measures had an impact in K-12 schools and on college campuses.

Many of the bills would restrict students’ rights and bar educators, librarians and other school staff from discussing or providing students with materials involving sexual orientation and gender identity, according to trackers maintained by the American Civil Liberties Union and the LGBTQ-rights group Freedom for All Americans.

This means LGBTQ students — and their adult and youthful allies — are experiencing not just the traumatic impacts of the pandemic and the greater economic, social and educational inequities it has brought to many communities, but also intensified fears for their mental health and physical safety.

For reporters writing about education, covering LGBTQ issues in the current climate requires a willingness to sift facts from rhetoric, the sensitivity to help those most impacted tell their stories and — perhaps most challenging when education news teams are already overwhelmed — a push for coverage that goes beyond adult politics.

How Did We Get Here?

Proponents say the laws are needed to enforce parents’ rights to determine what their children are taught about gender and sexuality, to counter ideological indoctrination and even sexual “grooming” by adults, to protect cisgender athletes and to keep inappropriate materials out of classrooms and libraries. Many of the bills’ backers would also like to see new limits on discussions involving race.

By contrast, many advocates for gay and trans rights see the legal assaults of the last few years as a backlash to the U.S. Supreme Court’s 2015 landmark decision in Obergefell v. Hodges recognizing same-sex marriage. In 2018, 41 anti-LGBTQ bills were filed in state legislatures, a number that rose to 191 by 2021. The percentage aimed at transgender people has risen along with the amount of legislation.

LGBTQ kids now report record levels of anxiety, depression and suicidality. In the most recent survey from The Trevor Project, a queer youth suicide prevention organization, 42% of LGBTQ youth surveyed said they had seriously considered suicide within the last year, as had more than half of trans and non-binary students. In a separate survey last fall, two-thirds of LGBTQ minors said debate over anti-trans legislation had a negative impact on their mental health.

At the same time, new laws that prevent parents, educators and medical caregivers from supporting LGBTQ children further increase students’ vulnerability, advocates say. Many of the new laws, they argue, are vague and likely to have a chilling effect on educators’ interactions with students.

Florida’s new “Don’t Say Gay” law prohibits classroom instruction on sexual orientation or gender identity for children in kindergarten through third grade, and bars discussion for older students that is not “age-appropriate or developmentally appropriate.”

Private citizens can sue if they believe a school has broken the Florida law. In March, a group of Orlando parents sued a school after a sixth-grade science teacher acknowledged to his class that he is married to a man.

Officials in other states and school districts have proposed similar measures. Championed by a number of advocacy organizations and commentators, such as right-wing activist Christopher Rufo, many of the anti-LGBTQ bills have identical language.

A Patchwork of Protections

In part because of the popular perception that marriage equality ended the struggle for gay and trans rights, your audience likely will need help understanding which LGBTQ rights are legally recognized and where.

In practice, protections for LGBTQ students, parents and educators are uneven at best. Federal protections have depended on politics, since presidential elections determine both administrative actions and judicial appointments.

For instance, in 2020, the U.S. Supreme Court in Bostock v. Clayton County, Georgia ruled that employers can’t discriminate based on sexual orientation or gender identity. Many interpreted the decision as applying to Title IX, the 1972 law that prohibits discrimination in education on the basis of sex. Then Donald Trump’s outgoing education secretary, Betsy DeVos disagreed, issuing guidance saying that Title IX protections do not apply to LGBTQ students.

Further, in 2021 the U.S. Supreme Court let stand a federal appeals court decision siding with Gavin Grimm, a transmasculine student who was not allowed to use the boys’ bathroom in school.

The state and local level protections are similarly patchy: 29 states are without comprehensive anti-discrimination laws.

The Williams Institute at the University of California Los Angeles has detailed information on the well-being of LGBTQ people in places without strong legal protection, also disaggregated by race.

Even in states and localities with anti-discrimination laws, LGBTQ rights often aren’t recognized in K-12 schools. According to the institute, almost half of LGBTQ people who have worked in K-12 settings and more than 54% of those in higher ed were not out to their current supervisor and about a fourth were not out to any coworkers.

Some school districts continue to insist that trans students use facilities that correspond to the sex they were assigned at birth. In some places, anti-LGBT law firms have sent administrators and board members memos asserting that the law is not settled and they risk lawsuits if they allow trans students to use the locker room or restroom that affirms their gender.

Florida’s new law is not the first attempt to curtail what teachers can say to students. According to GLSEN, a national organization that supports schools in becoming more inclusive, students in seven states that already had what it terms “No Promo Homo” laws are more likely to experience bullying, less likely to have affirming teachers and in-school access to LGBTQ clubs and library books.

In Minnesota’s Anoka-Hennepin School District, a policy of “curricular neutrality” — a variation on Don’t Say Gay — 10 years ago was linked to a wave of student suicides. In 2012, the district settled a federal lawsuit brought by students who claimed they were victimized because of the policy. Nonetheless, in 2021, the district paid $300,000 to a trans student denied use of the boys’ locker room.

Share
Author
Beth Hawkins
of The 74 for EWA
Related Skills
Getting Out of the Statehouse and Into the Schoolhouse When Covering LGBTQ Students
Here are 3 suggestions to better cover LGBTQ students.
A Guide to the Guides: What to Know About LGBTQ Style Guides for Journalists
There are numerous LGBTQ style guides for journalists, so here's a primer.
Load More
x