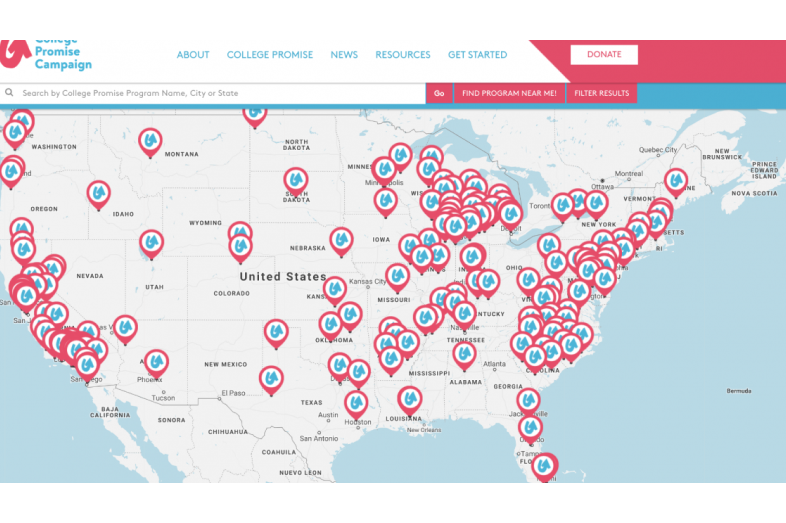 Is Your Community’s ‘Free College’ Program ‘Bait and Switch’?

By asking the five Ws, journalists can identify the fine print in College Promise programs.

“Free college” is an increasingly popular rallying cry for politicians. There are now more than 200 programs that seek to deliver on that promise around the country, and more being proposed nearly every month.

But the programs are more diverse than the catch-all label suggests. Each has its own definition of “free.” And almost every program has fine print that limits the offer to certain kinds of students or to a subset of college costs. In some cases, the fine print is so onerous that it amounts to “bait and switch,” according to Tiffany Jones, the higher education policy director at The Education Trust, a Washington-based research and advocacy group,.

Even the most generous current free college proposals are partial and more complicated versions of the original practice of public universities charging no or low tuition. That was the typical policy from the beginnings of the land grant universities in the 19th Century through about the 1960s. In 1973, for example, the average in-state tuition and fees cost to attend an in-state public university was just $985 a year. That amount was so affordable that students could generally cover it with the earnings of a full-time minimum-wage job over the summer. In contrast, the 2018 average in-state tuition at public universities, $10,230, is the equivalent of 35 weeks of full-time work at the federal minimum wage.

As more political leaders tout and implement modern free-college (also sometimes called “College Promise”) programs across the nation, reporters should be prepared to explain the fine print and limitations of the proposals being marketed by the attractively simple catchphrases, researchers said at an Education Writers Association seminar in early 2019.

In Jones’ view, the best free college programs cover more than just tuition and fees, can be applied to a variety of good colleges, and are very clear about their terms and conditions.

“A good free-college program is one that’s transparent,” she said. “Especially because these policies are new, we have opportunities to learn and make changes over time so that they can improve.”

One way reporters can help students and parents fully understand the offers and identify all the catches: rely on the standard 5 Ws (plus the H): Who, What, When, Where, Why and How

Most of the programs limit their offers to students who meet certain geographic, academic and economic criteria. Many only award or renew funding for students who fulfill certain grade and  credit load requirements. Others, such as the New Haven Promise, have additional requirements, such as high school attendance minimums and community service.

One of the first modern versions of a “free-college” program, the Kalamazoo Promise, launched in 2005, limits its full funding to students who have attended Kalamazoo public schools from kindergarten through 12th grade.

New York’s Excelsior Scholarship only offers free tuition to students from in-state families below an income cut-off. And if recipients move out of New York within four years after graduation, the scholarship converts to a loan that they have to repay.

Similarly, the newly launched “Community College Promise Scholarship” in Maryland offers funding to low- and middle-income in-state students, and converts to a loan if the recipient moves out of Maryland within a year of graduation. But the state has said the $15 million in initial funding for the plan may not be enough to support all eligible students. So it will allocate the scholarships to the neediest first.

That’s meant that Maryland officials have had to push a counterintuitive message. “People can hear the word ‘promise’ in the name of the scholarship and think that they’re guaranteed the funds,” Donna Thomas, a director of the Maryland Higher Education Commission said during the seminar. “But all of our verbiage and communication to students and parents clearly state that it’s based on the availability of funding.”

Jones was critical of programs that force students to repay their scholarship if they don’t meet certain criteria, calling it a “bait-and-switch.” “A good free-college program would actually be free and actually stay free,” she said.

Different programs cover different kinds college costs. Most, such as the Tennessee Promise program, focus on tuition and fees. Students must pay for books and other expenses out of pocket. Other programs, such as Indiana’s, offer enough funding that some students can cover books and even some living costs.

One important detail that sheds light on what the program will pay for: whether the program only kicks in if students still have costs left over after applying for other federal and state aid. These so-called “last-dollar” programs are much less expensive for states to provide because they only supply only what’s needed to cover tuition after students have applied for and received federal Pell Grants and other government aid. One survey found that “last-dollar” programs made up 75 percent of the promise programs across the country

A few communities and states, such as Indiana, have “first-dollar” programs, filling the initial need, allowing students to use other aid to pay for books or living costs.

Lanae Erickson, a senior vice president at Third Way, which describes itself as a “center-left” think tank, stressed that covering tuition alone – without considering books, day care, and other necessary expenses – isn’t enough to help low-income students truly succeed. Free college has  “become this really nice bumper sticker but in actuality it focuses us on the wrong thing,” Erickson said. “It’s not a panacea, and we know that tuition (alone) is not the reason most of these students are dropping out.”

Some programs, such as the Rhode Island Promise  only fund students who go to college immediately after high school. Others, such as the Wichita Promise, also offer aid to adults who have been out of school for a long time.

About two-thirds of “free college” programs only cover community colleges. But some, such as those in Indiana and New York, generally cover up to in-state tuition for at least some of the state’s public four-year universities. “For us, it’s really important that we not limit opportunities based on income, by only offering these opportunities at two-year colleges,” Jones said.

Some programs will fund students to pursue a wide variety of majors. Others only fund courses or majors that prepare students for a narrow list of in-demand jobs. Kentucky’s Work Ready scholarship, for example, only covers training for a limited set of health care and manufacturing jobs.

Most programs require applicants to complete the Free Application for Federal Student Aid (FAFSA) as well as other application forms by a deadline.

Because of the wide variety of free college programs, the impact of the movement has been mixed. One recent survey of the research found that simply launching a program was no guarantee that more people would actually enroll in college.

Jones and Erickson noted that tuition is just one of the barriers faced by disadvantaged students. A more successful way to expand access to college would be to pair free-college programs with a suite of other supports, including tutoring and advising, they said.

“Free college is trying to tackle affordability and that’s O.K” Jones said, adding: “But it’s also important for policymakers to be thinking about what additional resources and strategic investments can be made in institutions.”

Share
Author
Adam Tamburin
of The Tennessean for EWA
x