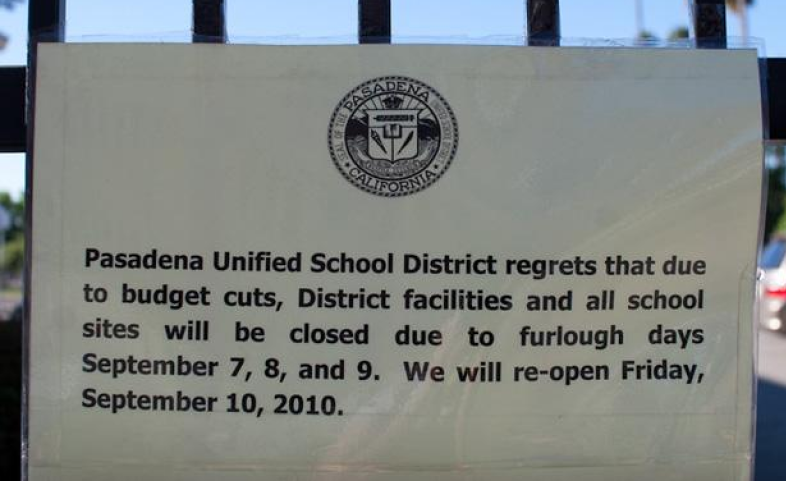 Public schools are ‘on the brink of a financial disaster’

School is back in session for approximately 50 million students that attend public schools and over 3 million teachers, but the COVID-19 pandemic has upended the way those institutions operate. District leaders are left to substantially nip and tuck their budgets during a pandemic-driven recession.

The financial stress on schools will vary widely based on a number of factors. They include the varying economic fallout in states and localities, whether Congress and President Trump can break the impasse on a fresh round of federal recovery aid, the extent to which districts have reserve funds and proactively recalibrate spending, and the cost implications of differing school reopening models (in-person, hybrid or all-virtual). In-person instruction requires substantial extra spending to ensure a safe environment, such as deeply sanitizing schools, providing personal protective equipment (PPE), and higher transportation costs for socially distant busing.

What school district leaders decide to cut, and where to concentrate spending this school year and for the years to come, will bring an endless supply of important stories for the nation’s education reporters.

“Because of the coronavirus pandemic, public schools today sit on the brink of a financial disaster without a sizable congressional bailout,” said Daarel Burnette II, an Education Week reporter who covers school finance and moderated a panel at the Education Writers Association’s virtual National Seminar in late July. “Budget cutting is some of the most dramatic storytelling you have to tell as an education reporter. … It’s very heart-wrenching.”

The session on school finance and what reporters should be watching out for this school year featured Michael Griffith, a senior researcher and policy analyst at the Learning Policy Institute and Marguerite Roza, the director of the Edunomics Lab at Georgetown University.

Below are some tips for education reporters that surfaced during the session.

Tip 1: Be on the lookout for a second round of budget cuts this fall.

“I feel like we’re in the eye of the storm, that we’ve been hit with this round of cuts in states, but we could be hit with a second round come the fall,” Griffith said. “Some of these budget projections in states have made assumptions that the economy would fully open up or close to fully starting in July and it would move forward from there. We know that’s not the case.”

Griffith said states will most likely come back and revise their budgets in October or November. Just like during the Great Recession — which lasted from December 2007 to June 2009 — states will be cutting education spending.

Roza said it’s been a while since district leaders have been faced with the need to make deep budget cuts. She identified multiple stages of budget cutting to expect, including “perimeter cutting,” where district leaders could decide not to renew contracts and get rid of some professional development days for teachers, and two labor-focused stages: District administrators could delay pay raises or roll back salaries. The last resort would be layoffs, where employees lose their jobs altogether.

“The district can only spend what it has,” Roza said. “They could dig into their reserves, but they can’t run deficits. So, they are going to have to make some choice if it looks like the revenues are going to look leaner.”

Burnette of Education Week urged education reporters to take the time to attend the budget meetings of local school boards.

“Schools have very big personalities. They also have very tight-knit communities, and you see this play out in board meetings.”

Tip 3: Pay attention to what is happening at the federal level.

Many education leaders felt like the $13.5 billion allotted for K-12 emergency relief and $3.5 billion for governors’ own discretion from the Coronavirus Aid, Relief and Economic Security (CARES) Act was not enough. (That bipartisan measure was signed by President Trump in late March.) For context, Congress approved $77 billion in direct funding for education through the American Recovery and Reinvestment Act during the Great Recession in 2009. And if a new financial recovery measure is enacted, make sure you understand the details of exactly how it works, and what, if any requirements, it imposes on states or districts.

A bill put forward by House Democrats in late September sets aside $182 billion for K-12 schools and $39 billion for colleges. There is one thing lawmakers in both parties appear to agree on: giving additional money to schools. The question is how much and what “string” might be attached?

Analyze perceived mistakes school systems may have made and new costs they are facing now. Pay attention to what districts spend and cut. In the last recession, there wasn’t as much absorbing of cost structures, said Roza, such as eliminating duplicative programs and closing schools that were under-enrolled to save money over time.

Also, teachers tended to receive raises early in the recession, but years went by without them getting much in additional raises. Teacher turnover increased, thus leading to a teacher shortage.

This recession is different.

“Costs are increasing with PPE, and [other] things to do to make schools safe,” Roza said. “We can’t ignore that the labor market has also changed and maybe if we promised a big raise this year or ’step in column’ raises, and we’re trying to attract and retain teachers, we might not see as much turnover [among] teachers during a recession as we thought.”

New costs for districts include masks, Plexiglas and thermometers.

Reporters should watch for how their districts choose to spend their money. There may be limited class sizes or hybrid learning models happening in one class that may also come with its own digital expenses. Transportation is a big expense. Reporters should find out, for example, if district leaders plan to increase the size of their bus fleet if they allow significantly fewer students on each bus. Or will they give parents a stipend to bring their kids to school? Something else to keep in mind: What additional training and professional development will districts provide for educators, and will this cost more than what was previously budgeted?

Tip 5: Ask school district officials about how they are reorganizing staffing models.

Roza said that “last in, first out” hiring models could occur again, where the last hired teachers get laid off first. However, that may be problematic from a financial perspective, because newer teachers typically cost the district less in salaries and may be a healthier part of the workforce.

“Districts just don’t have much muscle memory for doing anything else than that,” Roza said. So, I think that’s … definitely something to watch.”

Also, districts may want to determine which educators excel at teaching online and which ones don’t. Roza said there could be changes to the traditional class size structure that may give ground to a combination of online and in-person classes happening at the same time. District leaders must also consider who will be paying staff that are too vulnerable to come to work.

Roza said there needs to be conversations on how to handle disability pay in the next federal bailout and if there is money for people in the education workforce who are immunocompromised.

Also, look out for districts offering stipends for existing teachers who may want to pick up additional duties through tutoring, etc. What extra resources are they giving to those teachers? What are the benefits?

Tip 6: Find out how much money your district has in its reserves (which is the balance in a General Fund account).

Inquire how much is available in both state and local reserve funds to deal with unanticipated expenses for education. But Burnette said to be wary of how much (or little) districts have in reserves. “If it’s a ton, well that’s concerning because why weren’t they spending that money before? If it’s very little, that’s concerning, because how are they going to be able to survive this pandemic that could potentially last for two-three years?” he said.

Tip 7: Look regionally at which districts are most vulnerable to budget cuts.

Which districts are going to suffer the most from a 5% cut at the state level, for example? Also, be on the lookout for school districts that passed a budget in February or early March and have not gone back to revise it in October or November.

But, as Griffith noted, realize that schools simply weren’t built for this, Griffith said.

“When you do the numbers, about one in six people in this country is either an employee of or a student in a public school. And so we’re talking about suddenly you’ve got somewhere around 56 million people having to change what they do in 15,000 school districts and charter schools, it’s very difficult.”

Schools are implementing a wide variety of plans. Some will be completely online, some might be in-person and then there are several models in-between, he said.

“If you’re doing in between those two, now you’ve got two fully different sets of costs,” Griffith said. “One is to have a fully prepared online program. And the other is a fully prepared in-person program. You don’t double the cost. It doesn’t work that way. You have added two distinct … costs. If you want to have 100% of your kids in [school] and you’re going to socially distance, it’s going to be astronomically expensive, because we just don’t have the facility space and we don’t have [enough] adults in schools.”

Tip 8: Put a price tag in every story that you write that involves a school board or superintendent decision.

“That’s an easy way to just start making [readers] think about money,” Burnette said, to consider the implications of the financial decisions that they (district leaders) are making.”