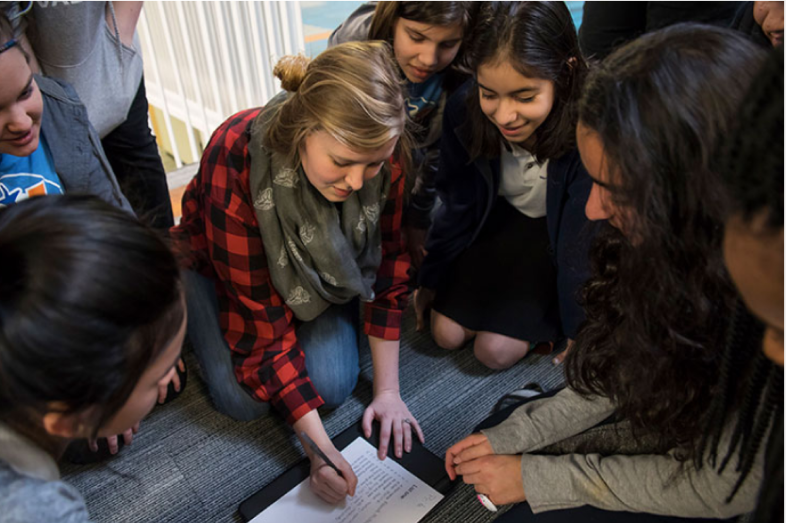 The Ins and Outs of ‘Restorative Justice’ in Schools

What is it? Does it work as an alternative to traditional student discipline?

When students misbehave at school, traditional approaches to discipline say you should punish them to deter future offenses.

But a growing movement toward “restorative” approaches to discipline focuses more on repairing the damage rather than suspending or expelling students.

Though details vary from school to school, so-called “restorative justice” programs instead encourage students to reflect on their transgressions and their root causes, talk about them – usually with the victims of the behavior – and try to make amends.

Troi Bechet, who heads the Center for Restorative Approaches in New Orleans, said the approach is about “building, strengthening, and repairing relationships.”

“You broke a rule but you also harmed a relationship or relationships in the community and, as a member of that community, you have an obligation in the community to repair that harm,” Bechet told reporters at a recent Education Writers Association seminar in New Orleans on educating for character and citizenship.

Joining her for a panel discussion on rethinking student discipline was Becky McCammon, who advises the St. Paul, Minnesota, school system and its teachers as they test drive restorative approaches to discipline.

McCammon told reporters that while suspension may look like accountability for causing harm, it doesn’t address the underlying reasons for the behavior or help students avoid repeating it when they return to class.

“What’s the plan?” she asked. “How are you going to go back into this [school] setting, with this person or persons and situation or context, even, that might trigger you.”

But Max Eden, a senior fellow at the Manhattan Institute, a free-market think tank, offered a skeptical view. He told reporters that political considerations have forced schools to reduce suspensions even if behavior isn’t improving .

Restorative justice has become a trendy “fig leaf” to hide the chaos and disorder in schools that results, he said.

“This can lead to incredibly dangerous dynamics in class,” said Eden, who provided examples of assaults and threats to students and teachers that he attributed to a lack of punishments. “Teachers know they can no longer rely on their principals for support and kids know that. “

The concepts behind restorative justice are nothing new and they are not just limited to schools. Courts, for example, use many of the principles when requiring community service, restitution, or victim mediation programs.

But advocates of restorative justice say the approach has gained support in schools in recent years for a few reasons;

– Suspensions and expulsions are viewed as ineffective and damaging to students, since kids that are kept out of school miss out on learning opportunities and fall further behind.

The Obama administration also drew attention to school discipline in 2014 when it issued guidance that encouraged schools to reduce suspensions and expulsions and warned that districts that disproportionately suspended students of color could be in violation of federal civil rights laws.

For Eden, that guidance makes much of the push for restorative programs suspect. He said about 500 districts have been investigated following the guidance letter, with threats of losing federal funding. Restorative programs, he said, have come less from love of kids than fear of repercussions for high suspension rates.

“What’s driving this shift isn’t this kind of moral awakening that we need to take a nicer, more in-depth approach to relationships with students,” he said. Just labeling a decision to cut suspensions as “restorative justice” is deceptive and can let problems grow, he argued.

Some observers anticipate that the Trump administration will rescind the Obama guidance on student discipline, though nothing has been announced.

Bechet and McMannon focused during the panel on the limits of traditional discipline and how restorative practices can overcome them.

The most common practice? The “circle” – a discussion where students and teachers face each other and openly discuss their daily school lives and take on problems as a group when they arise.

“Tell me what happened,” Bechet said students are told. “Who was impacted by what happened? How were they impacted? How might you feel if you were in that situation? Now what do you think you can do to repair the harm that was done?”

That process, she said, allows teachers and other students to work “with” an offender, rather than doing things “to” them, which builds more of a sense of community. “With” vs. “to” was a major theme in her approach.

Both Bechet and McMannon said it is vital to build a sense of community and support before pulling back from traditional disciplininary practices, so that teachers and students alike trust the process. In St. Paul, McCammon said, the district and the teachers’ union are working together to test restorative practices as a pilot at 12 schools over five years.

The “with” vs. “to” dynamic is crucial for how teachers and the community are involved in the program, not just students, McCammon said. If teachers feel the approach is being pushed on them, it won’t work, so the first few months of the pilot have centered on training teachers and reflecting on ways to make it work, she said.

All of the schools in the pilot also applied to be part of it, McCammon noted, so principals were not forced.

McCammon and Bechet said reporters covering local restorative programs should look at a few factors to see if it is being done with fidelity:

Eden of the Manhattan Institute said reporters need to talk to teachers and students outside of a school setting to get candid impressions on how restorative justice is working.. He distrusts anything school administrators or teachers might say when being quoted on the record, since the district may be pressuring them to simply reduce suspensions.

That said, Eden does not dismiss restorative justice altogether,, but warned that claims of success are overblown.