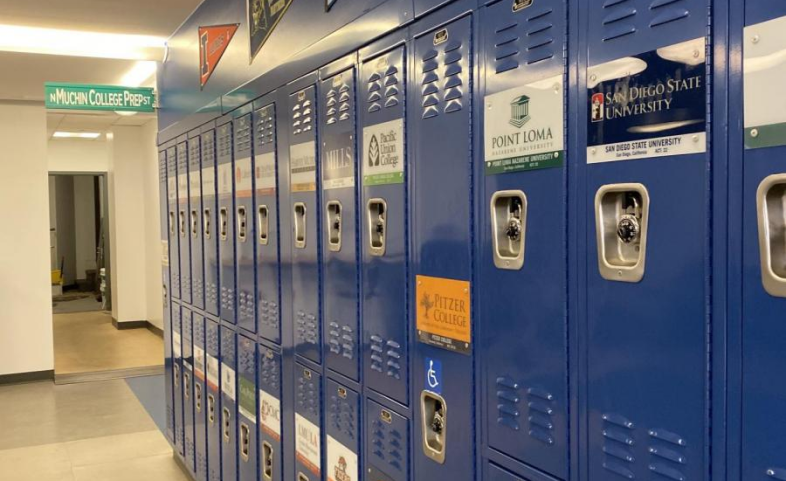 At Noble campuses, it’s ‘college prep from the moment you walk in the door’

From the exterior, Muchin College Prep doesn’t look much like a high school. It’s located in an unremarkable office building in downtown Chicago, where an elevator carries visitors to the seventh-floor campus. There, the walls are festooned with college banners, classrooms are bustling with discussions and group work, and football helmets rest on top of a long row of lockers.

Yes, Muchin — part of the Noble Network of Charter Schools — has a football team. Its students, nearly two-thirds of whom identify as Hispanic or Latino and another 29 percent as African American, also have access to a dozen Advanced Placement course offerings, and electives like jazz band and drama. The underlying mission of the network — the goal that underpins all other decisions, according to its leaders and staff — is to help more underserved students make it to college and to thrive once they get there. A recent study suggests its approach is making a big difference for many low-income students of color.

A small group of journalists recently toured the school as part of the Education Writers Association’s November 2019 seminar, “Education and the American Dream: Pathways From High School to College and Careers.” As with any school, first impressions — like Muchin’s front entrance — can be deceiving. That’s why education reporters should, and do, go deeper, using data and other evidence of a school’s trajectory and policies to balance out observations.

When it comes to the Noble model, there’s no shortage of stories that have been written — by local as well as national reporters. There have also been numerous studies of its approach to recruiting and retaining students, campus discipline, and postsecondary achievement.

Since 1999, Noble has grown from one campus with about 150 students to serving 12,000 Chicagoans at 17 high schools and one middle school. In February 2019, Chicago Public Schools renewed the network’s contract for an additional five years. (There have been some bumps in the road, including the founder of the network stepping down last fall amid allegations of inappropriate behavior that triggered a Chicago Public Schools investigation.)

There’s also been criticism of Noble’s “no excuses” model and approach to school discipline, examined closely by The Chicago Reporter in 2017. And in a 2018 interview with NPR Illinois and EWA member Dusty Rhodes, one teacher went so far as to call Noble’s strict campus culture “dehumanizing.” In the same segment, however, another teacher said the discipline policies, in the context of the school’s overall mission, are not out of line.

Here are three takeaways from the recent visit:

A new study by researchers at the Massachusetts Institute of Technology found that attending a Noble high school “boosts achievement sharply” for students who just missed the cutoff for selective enrollment schools. And here’s the context — those Noble students also outperformed their similarly situated peers who were admitted to the selective enrollment schools. The study — which looked more broadly at CPS’ efforts to diversify its selective high schools and not just the Noble campuses – controlled for attrition, and was based on scores for district and state-level tests given in the 10th grade as well as the ACT, which is a component of a required exam for 11th graders.

Based on those tests, there’s “pretty convincing evidence” that attending Noble produced stronger academic achievement for many students than enrolling in the selective admission campus, Parag Pathak, a microeconomics professor and co-author of the study, told EWA. Having two years’ worth of test data “gives us more confidence that we’re picking up something that is related to learning,” he said.

The Noble and non-Noble students were similar groups in terms of demographics like race and gender, Pathak said. The only difference between them were their lottery numbers which influenced whether or not they ended up at a selective high school.

“There was this narrative out there, that we are somehow picking the special kids or attracting the special parents,” said Matt McCabe, the chief of staff and of public affairs for the Noble network. “But every time we opened another school, we have proven that is not the case.”

According to Noble, 35 percent of the network’s graduates who attend a four-year college earn a diploma within six years. That’s slightly better than the national average of 33 percent, and significantly higher than CPS’ districtwide average of 19 percent. Writing for The 74 Million in 2017, author Richard Whitmire broke down Noble’s college success rate (which at the time was 31 percent), noting that “Noble’s rate is at least double that of Chicago Public Schools generally, and probably far more than double the comparable rate for similar low-income minority students within CPS.”

“Any challenge Chicago has, we have,” McCabe said, noting that the network serves a higher percentage of students with special needs and those who qualify for free and reduced priced meals than the citywide average. Additionally, 84 percent of Noble students are poised to become first-generation college students.

Choice Isn’t the Same as Buy-In

Students and their families often face a steep learning curve when they arrive at Noble. “The headline is that we’re college prep from the moment you walk in the door,” McCabe said. That can be a steep learning curve for some. (Good questions for reporters to ask concerning student enrollment at charter schools in their own communities include: How do you recruit students? What does the application process look like? Do you require prospective families to make any explicit commitments, such as signing a contract pledging a high level of parent engagement?)

Naomi Lindquist, a senior at Noble’s Muchin campus, initially put the school on her preference list not because of its academic reputation but because of its proximity to the dance studio where she trains most days. (The school draws its 935 students from more than 50 ZIP codes across the CPS attendance boundaries.)

The more rigorous expectations in and out of the classroom took some getting used to, she admits. Her friends attending “regular” CPS high schools had more leeway over their clothing choices and cell phone use during the academic day. But she also sees how they struggle regularly with homework, often pulling all-nighters to complete larger assignments. By comparison, Lindquist said she now considers herself a savvy time manager.

“It’s taught me discipline,” she said.

The Noble connection can also help students broaden their horizons. Cyndy Chavez, a Muchin senior, is among them. She didn’t want to follow the paths of some of the people in her neighborhood who she described as “stuck in a rut” because their choices of post-high school careers were limited.

“I knew my education was a way to be able to do something and explore my passions,” she said. “I knew that college would be my ticket there.”

But she’s also grounded in reality. On her college applications, where she’s asked how she plans to pay for college, Chavez indicated that her family would not be able to contribute. Noble’s counselors have helped her identify potential scholarships and other resources. And through Noble’s “Summer of a Lifetime” program, Chavez spent time learning at Boston College in 2018 before the start of her junior year. “We got to be on a real college campus and take classes from real college professors,” she said.

Noble’s goal is a 75 percent college completion rate — the same as the national average for students who come from affluent families. To reach that, the network is working to add more intensive support services to help ease the transition to postsecondary education, said Matt Niksch, the network’s interim president. (For more on another organization’s highly successful approach to that goal, read this takeout on The Posse Foundation.) About two dozen Noble alumni counselors keep tabs on current college students and a newly formed alumni association — led by Noble graduates — hosts career workshops, professional networking events, and social gatherings.

When it comes to a student’s chances of succeeding in college, academic readiness is just one piece of a complex puzzle, alongside financial stability and social and emotional skills. It also matters where a student chooses to enroll, Niksch said.

That’s why Noble’s counselors encourage students to look not just at what a college promises but what it actually delivers, he said. The Noble Forward program focuses on the charter network’s graduates who subsequently left college without earning a degree, offering support and discounted tuition opportunities to return to their studies. The Pritzker Access Scholarship, which provides one-on-one counseling and financial support to Noble’s undocumented students who enroll in college, has been lauded as a national model. Of the first cohort of scholarship recipients, 60 percent completed their undergraduate degrees within four years. And the network expects 70 percent of its senior Pritzker Scholars to graduate on time in May — more than double the national average.

Stephan Cevallos, a Muchin senior, said he didn’t know much about the school other than what he heard from friends who, like him, missed the cutoff for the city’s selective admission campuses. Once he started looking at Noble’s track record for student achievement, he was impressed.

“I realized I wanted to be part of that too,” Cevallos said.

He now believes attending Muchin has put him in a strong position to be accepted at a highly selective university. (His top choice is to study bioengineering at MIT.) He’s also had the benefit of one-on-one counseling, structured class time dedicated to helping students navigate the red tape and fine print of their applications and financial aid documents. Cevallos might not have gotten into the most selective of Chicago’s high schools, he added, “but Noble has had the best outcomes for me.”