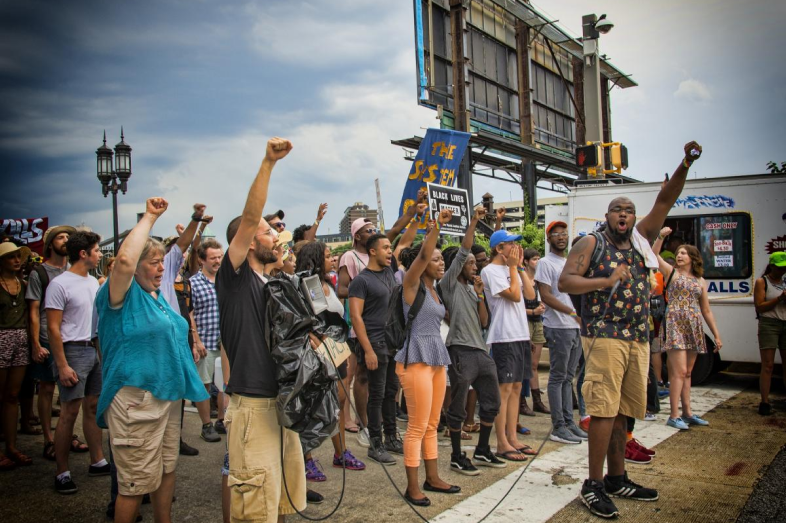 Your editor has just assigned you a story — students at a local university are planning a demonstration calling for the removal of a Confederate statue. Do you know what to bring, who to talk to, and how to cover it in a way that is balanced and contextualized?

While covering any protest requires sensitivity and scrupulous reporting, journalists covering campus protests that touch on issues of race need to be especially prepared and equipped, several reporters experienced in such coverage said at an Education Writers Association seminar at Georgia State University this month.

Based on their experiences in the field, the veteran reporters advised journalists to brush up on history, scrupulously fact-check allegations, be especially careful about using value-laden words to describe incidents, include a wide variety of viewpoints, and stuff some extra (and surprising) supplies in their pockets.

Before covering these stories,  journalists should take time to educate themselves about the long, sometimes ugly, history of racial conflicts on college campuses and the problematic way such conflicts have been portrayed in the media, said Tiffany Pennamon, an assistant editor for Diverse: Issues in Higher Education.

“News doesn’t occur in a vacuum,” Pennamon said. “As education journalists today, we should be doing our homework, making sure that [our stories are] based in that historical context of covering race.”

In the past, Pennamon said, media coverage of protests has perpetuated racial stereotypes or buried larger stories. For example, the Northern press initially did not pay much attention to the sit-ins and freedom movements of the 1950s and 1960s, Pennamon said.

“Doing [your] homework” means not just knowing the history, but reflecting on your own implicit biases as a reporter, added Tracie Powell, the founder of AllDigitocracy.org, a website that explores the media and its impact on diverse communities.

Complicating what is already a challenging and sensitive issue to cover is the occasional occurrence of hoaxes. Several recent alleged incidents of racism — incendiary posters or graffiti, for example — turned out to be fabricated or staged.

At St. Olaf College in Northfield, Minnesota, for example, a threatening note with a racial epithet was found on a student’s car windshield, sparking days of protests and cancelled classes. A student later confessed to fabricating the threatening note in an attempt to shed light on issues of race on the campus.

Pennamon urged reporters to approach any allegation with a healthy dose of skepticism. One important fact-checking step: See if the person making allegations has made unfounded claims in the past, she said.

Word choice can also trip up an otherwise well-reported story. Certain terms may sound innocuous but, in fact, carry loaded or “coded” meanings, warned Marlon Walker, a reporter for The Atlanta Journal-Constitution. In coverage of the mass shooting in Las Vegas, many media outlets did not label the alleged shooter a “terrorist,” Walker noted.

When it seems as though the media is discriminating in their use of certain terms, Walker said, it breeds mistrust between the media and certain segments of the community.

“People see it and that’s where we lose the ability to gain our audience,” Walker said.

Lisa Pemberton, a journalist and news team leader with The Olympian, added: “Language is important. ‘Riot’ is usually not the right word to describe a protest.”

Reporters eager to generate clicks “tend to go to the most extreme person out there and quote them,” noted Powell. It’s fairer and more reflective of reality to seek out a variety of voices to include in news stories, especially of protesters, she said.

“We as journalists spend a lot of our energy reporting on and reporting from sources of power, and not giving enough weight or credibility or space to protesters,” Powell said.

Pemberton, who has been covering racial tension and student protests at The Evergreen State College in Olympia, Washington, has learned the hard way that covering protests requires changes to reporting practices and equipment.

She’s learned to get to the protest site as early as possible and start doing on-the-record interviews immediately.

“No one’s going to want to talk to you after it gets ugly,” Pemberton said.

And she urged reporters to prepare for worst-case scenarios, such as violence or arrest. That means carrying water (to flush pepper spray) and bringing your editor’s number (in case you get arrested).

There’s plenty of work for reporters to do after the protests are over, she added, such as follow-up stories on damage estimates, discipline against the students involved, internal investigations, and even lawsuits, Pemberton said.

And after the story is published, reporters can expect intense backlash from the public.

“You’re going to get hate mail from both sides,” Pemberton predicted. “I’ve been called … a fascist, a Trump supporter, corporate media. … Lots of people told me I should be fired.”

You can view Pemberton’s full list of tips here.

In the end, suggested Pennamon, the best way to report on race issues fairly and minimize the risk of a public firestorm is to be careful, and be sensitive to the concerns of your readers and sources.

“The biggest thing that will take you the furthest,” she said, “is just approaching people with respect and humility.”