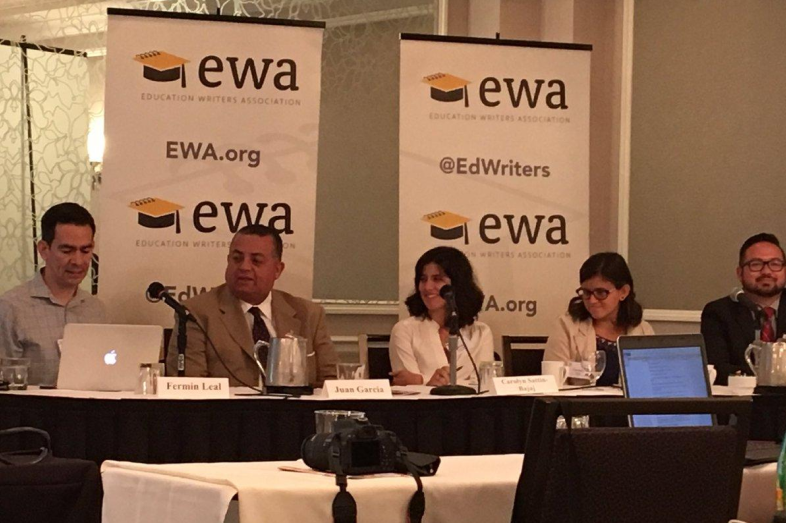 The number of Hispanics taking the ACT exam jumped 50 percent from 2011 to 2015. But only 15 percent of those test takers are scoring well enough to be deemed college-ready in all four subjects, compared to 28 percent of other students.

These figures starkly reflect “the gap between the level of aspiration and the level of readiness” required to thrive in college, said Juan Garcia, senior director of the ACT’s Office for the Advancement of Underserved Learners.

Cultural obstacles arise even in many cases in which students enjoy adequate academic preparation. Garcia told the story of a young Latina who was offered a full ride to Stanford University and declined because her family — who lived in Sacramento, which is about 115 miles from Stanford — decided it was too far for her to move away from them.

This is a common scenario, especially for many young women, said Carmen Macías, an undocumented immigrant who is a graduate student at the University of Southern California Rossier School of Education. She recently finished a two-year term as a counselor with USC’s branch of College Advising Corps, a national group that aims to increase the number of low-income, first-generation students who continue their educations at college.

“The parents simply don’t let them go,” Macías said. She suggests that students ask their parents, “If you have come so far for a better life, why don’t you let your children go?”

Rather than slamming the parents as obstacles for blocking their children from going away to the most competitive colleges, it can be helpful to contact Latino students who have left home to get a higher education and arrange for them talk to reticent parents about their experiences, said Carolyn Sattin-Bajaj, an assistant professor and co-director of Seton Hall University’s Center for College Readiness.

The problem often is more financial than cultural. Young men in particular are expected to help their families by working as much as they can rather than pursuing a higher education, Macías said.

“You don’t know the situation at home, so you can’t say anything,” she said. “The families are waiting for them to graduate high school so they can work full-time.”

Basic expenses such as application fees and charges for sending test results to admissions officials are prohibitively high for some immigrant families, Macías said, noting, “Many parents just don’t have the money to pay for that.”

Victor Zamora, director of the KIPP Through College program at the charter operator’s Colorado schools, said KIPP found many students who had done well in high school frequently could not finish college. Making better college matches for Latino students can help increase graduation rates, he said.

“It’s not enough to know the graduation rate of a college or about financial aid there,” Zamora said. “What does the student want?”

Many Latinos are going to community colleges even when they can get into four-year institutions. That lowers their chances of eventually graduating with a bachelor’s degree, said Seton Hall’s Sattin-Bajaj.

Some are turned off from four-year schools because they look at the sticker price of attending without realizing the net cost after receiving financial aid frequently ends up being much more reasonable, she said.

Panelists at the EWA seminar in D.C. also looked at the role of HSIs — Hispanic-serving institutions, which serve student bodies that are more than 25 percent Latino.

About 1.75 million Latino undergraduates go to HSIs, representing 62 percent of Latinos in college in the country, said Deborah Santiago, chief operating officer and vice president for policy at Excelencia in Education.

There are 435 HSIs, up from 189 such institutions about 20 years ago, Santiago said. The vast majority are in cities or suburbs in five states and Puerto Rico, although new HSIs have cropped up in seemingly unlikely places, including Indiana, Kansas, Ohio and Oregon.

“We understand the importance of a study plan that’s multicultural, that blends learning and what you know from home,” said Clara Oropeza, a professor at Santa Barbara City College, which became an HSI in 2009.

At Marquette University in Wisconsin, a private institution where only about 10 percent of the student body is Latino, leaders have set a goal of becoming an HSI in 10 years, said Alicia Diaz, executive director of legislative affairs for the Hispanic Association of Colleges and Universities.

“The intentions are important,” Diaz told reporters. “Many say, ‘Welcome, we are committed to Latino students,’ and that’s it. Or they do a pamphlet that says ‘We are an HSI.’ That’s not enough, for us, to be an HSI.”

“Most don’t have a legacy of going to college,” she said.

Institutions also can greater encourage Latino students by telling them what their investment in higher education will mean in terms of future earning power, she said.