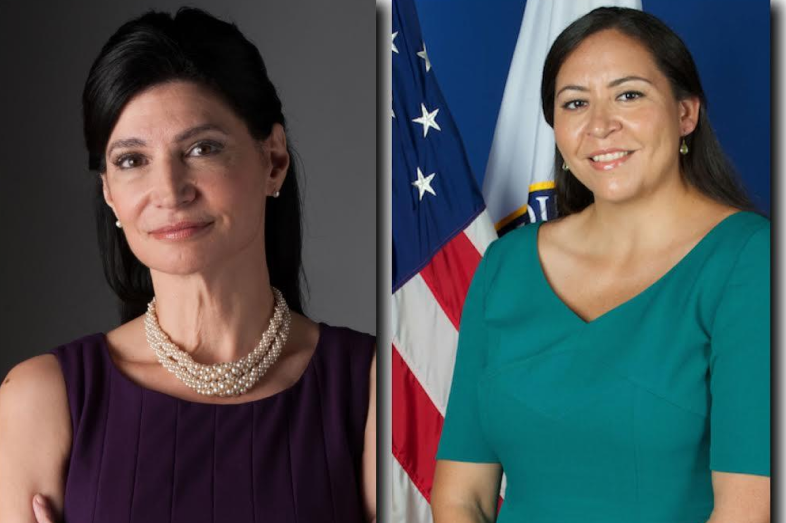 “For decades, whenever you mention the word ‘education’ next to the word ‘Latino,’ the news that follows or the information that follows is not the most encouraging.”

That’s how Elianne Ramos, CEO of Speak Hispanic, founder of the Border Kids Relief Project and columnist for Huffington Post, introduced a live video discussion Monday with Lily Eskelsen Garcia and Alejandra Ceja — two Latina leading ladies in education. For half an hour, the three discussed priorities and opportunities related to Latino education.

Name one action that could have the largest impact on Latino education, Ramos asked each of her guests.

For Ceja, executive director of the White House Initiative on Educational Excellence for Hispanics, the answer was early childhood education and making parents aware of its importance.

“In today’s global economy, a high-school degree is simply not enough. If we’re going to compete and we’re going to ensure that we have a prepared workforce, we need to ensure that we create that educational pipeline – starting from early learning,” she said. “Unfortunately the majority of Latinos eligible for learning programs are not enrolled….We have to take legislative action to make sure we can educate Latino parents.” Ceja referenced the Obama administration’s efforts to expand universal preschool access and cited research that every  $1 spent on preschool has a $7 return because of money saved on public assistance payments and prison later.

Garcia, the first Latina president of the 3.2 million-member National Education Association, had difficulty giving only one answer to Ramos’ question.

“It’s never going to be one thing,” she said. “Yes, preschool, but affordable college, but the AP chemistry class that will get you to that, but a decent class size when they’re in the third grade. Giving all kids what all kids need, and that means equity,” she said.

On that topic, Ramos asked: “Why should anyone really care about this inequity issue?”

”When you had a small population of Latinos…and they weren’t doing well, you still had the moral, civil and human right imperative to do the right thing. And we’ve always made that case as educators,” Garcia said of investing in equal opportunities — whether it be school programs, facilities or educators — for students of affluent as well as low-income families.

Garcia has been encouraged by the number of related questions being posed to political candidates recently — questions like, “‘Where are you on making sure we have affordable college for everybody?’ ‘Where are you on things like English language learners and bilingual programs in our schools?’”

“I feel, for some of these policymakers or future policymakers, that if they don’t have the answers, they’re appreciating the questions – that these are important issues and people want to know how children and their families are being protected and being served,” Garcia said. She told POLITICO Pro earlier this year NEA wants to know where candidates stand on equity and wants to endorse politicians — across the spectrum — who understand “a student is more than a test score.”

Awareness was also a hot topic as each woman listed various programs by their organizations to educate students and parents alike about educational opportunities, including financial aid and resources for those under Deferred Action for Childhood Arrivals status seeking to learn more about their options.

Ceja’s office will celebrate its 25th year of action anniversary next September and plans to spend the year engaged in honest, national dialogue about the progress in Latino education as well as the gaps that still exist.

“The president has said it. We’ve heard other individuals, other stakeholders say it,” Ceja said. “‘The success of the Latino community is going to be directly tied to the success of this country.’”