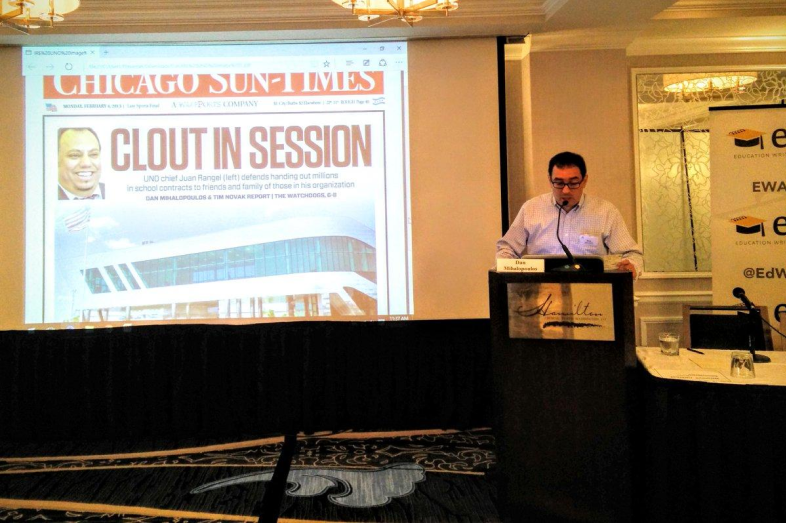 Charter schools have grown at a rapid rate over the past 20 years as parents, activist groups, lawmakers and others look for alternatives to the traditional public schools.

Supporters say charters can offer the freedom to be more creative in the curriculum they provide to support a wider range of needs for students.

Dan Mihalopoulos, an investigative reporter for the Chicago Sun-Times, spoke at the Education Writers Association’s recent Washington, D.C. seminar, Equity in Education: What That Means for Latino Students, about his experiences reporting about a Chicago charter schools group.

Charters schools can be started by just about anyone, such as parents or teachers, to offer specialty programs. The schools are run independently and receive the same amount per student as other public schools. Many large cities, including New Orleans, Los Angeles, and D.C. have a high concentration of minority students attending charter schools. In Chicago, for example, 1 in 5 students attend a charter school.

Mihalopoulos’ 2013 stories about the United Neighborhood Organization’s charter-school network won EWA’s first prize for investigative reporting, as well as a host of other awards.

Through his investigations, Mihalopoulos found that the charter network, also known as UNO, awarded millions of dollars of construction contracts to companies owned by various brothers of the network’s chief operating officer, Juan Rangel.

During his presentation in Spanish at the EWA seminar, Mihalopoulos described to journalists from Spanish-language media outlets across the country how he uncovered the story and what steps he took to report on the issue.

Mihalopoulos said the best place to start was by following the old investigative journalistic adage of “following the money.” He offered a series of tips for how to track spending, the awarding of contracts and political donations. They include:

Mihalopoulos also advised that private firms now own many charter school networks, which is allowed under the law. But the schools themselves, because they are public schools, are still subject to freedom of information requests, even if the firms’ executives might try to challenge this notion.

Mihalopoulos warned the audience at the EWA session that as newsrooms shrink and the number of newspapers decreases, it’s now more much more difficult to cover the types of stories such as the UNO charter network. But that should not stop journalists from being aggressive.

“The pressure is on all of us,” he said. “We’re all being asked to do more work for less pay. But we need to continue to push as hard as we can.”