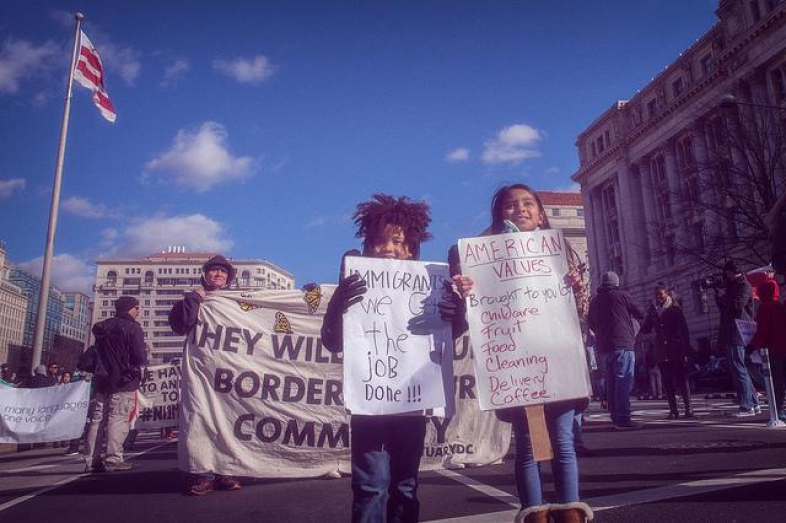 How a ‘Day Without Immigrants’ Affected Schools

Schools across the country took a hit in attendance Thursday as immigrant children joined nationwide protests intended to demonstrate what life would be like without the nation’s more than 42 million immigrants in response to President Trump’s controversial immigration agenda.

Teachers and students took to social media to share their thoughts and photographic evidence of what their classrooms would look like if a “Day Without Immigrants” were an everyday occurrence.

My classroom on the #DayWithoutImmigrants. 8 kids here, 17 home in protest. We read books in Spanish all day. #nnstoy pic.twitter.com/rr13yljRwr

My classroom on #daywithoutimmigrants. These desks are usually full! pic.twitter.com/89jeNS8PNr

Empty desks today as over half my class stays home #diasininmigrantes pic.twitter.com/xXrW9H2ujK

#DayWithoutImmigrants my mom made me come to school, but look how empty it is pic.twitter.com/d5kd6Cv1Xh

Some schools coped by combining classes or closing all together.

As WAMU in Washington, D.C. reported, at least two charter schools had closed, including the two campuses of Latin American Bilingual Montessori schools. The administration said reasons were “practical — not political.” Because 70 percent of the staff are immigrants or married to immigrants and wanted to participate in the protests, the schools would have been down too many teachers to operate, an administrator told the news outlet.

Many school districts had urged families earlier this week not to include their children in the protests.

In Los Angeles, a majority-Latino school district, LAUSD administration left voicemails for employees and parents saying that while the district supports civic action, students and staff would be expected to come to school.

Schools offer a “safe and productive forum where students can express their thoughts and feelings,” said LAUSD’s chief of staff Alma Pena-Sanchez. “I urge students and staff not to disrupt learning by participating in protest or walkouts during the instructional day.”

Ray Salazar, a high school English teacher in Chicago, wrote on his White Rhino blog that about half of his students were absent Thursday (though he doubted many of them actually attended the protest).

When one student asked him if he would be protesting, Salazar – who chose the name for his blog because of the rarity of Latino English teachers in U.S. public schools — told her, “This is where I need to be.”

For more on how a “Day Without Immigrants” affected schools, check out these stories from Arizona, California, Oregon, Tennessee, Austin, D.C. and New Orleans.