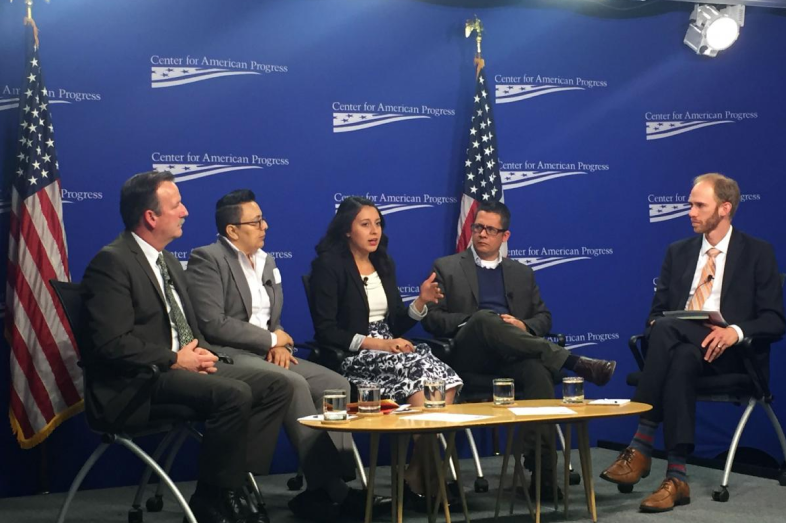 When Yehimi Cambron crossed the U.S. border from Mexico with her parents, they told her she would not have documented legal status in this country. But as a third-grader, she had no concept of how that would affect her.

It wasn’t until she was 15 and denied a $50 prize in an art competition because she didn’t have a Social Security number that she grasped its meaning.

“Even if I have the talent, I don’t qualify,” said Cambron, a Teach for America corps member, who has been granted temporary authorization to stay and work in the United States under Deferred Action for Childhood Arrivals. “It was very eye-opening.”

Cambron’s story resonated with her fellow panelists at “Harnessing the Talent of DACA and Unauthorized Students at the K-12 Level,” an event hosted by the Center for American Progress Wednesday in Washington, D.C. As educators, many of the speakers had encountered students with similar backgrounds.

Harvard University professor Roberto Gonzales spent 12 years following the stories of undocumented youth in the Los Angeles area for his new book, “Lives in Limbo: Undocumented and Coming of Age in America.”

“I argue that illegality or undocumented status is a master status, a binding constraint, a lead weight, if you will,” Gonzales said. “Many of my respondents, as they’ve moved into their late twenties and early thirties, felt that they had little options left.”

Of the nearly 11 million undocumented immigrants in the United States – the vast majority from Mexico and Central America — around 2 million have lived here since childhood. Young adults who fit this description are often called “DREAMers,” for the failed Development, Relief, and Education for Alien Minors Act, that was introduced in Congress in 2001 but never passed.

These DREAMers grow up side by side with native-born friends and peers. But as they get older, their friends get driver’s licenses and after-school jobs that undocumented students don’t have the same access to, Gonzales said, referring to this time in their lives as the “transition to illegality.”

In the absence of a federal law protecting their futures in the United States, undocumented youth face instability, including the threat of deportation, as they age out of the K-12 school system. They’re not eligible for federal financial aid to pay for college and may not receive in-state tuition benefits, which vary by state. DACA, introduced in 2012, provides temporary relief from deportation and work authorization for qualifying young adults but does not provide a permanent solution.

Knowing first-hand the instability undocumented children will one day face, Cambron stressed the importance of educating teachers in how to provide support for these students at an early age. When she was ready to apply to college, some of her educators were unable to advise her how to proceed.

Supporting undocumented immigrant students has been a focus in Boston, where the teachers’ union has stressed the importance of communicating inclusivity to students, said Frances Esparza, assistant superintendent of the Office of English-Language Learners in Boston Public Schools. They’ve created special learning groups for undocumented students, increased parent outreach and added signs on their doors indicating that all are welcome.

At Brentwood High School in Long Island, New York, which is 76 percent Latino, Principal Richard Loeschner has begun to look for teachers who are dually-certified in teaching certain subjects, like social studies, for example, and teaching English as a second language. There are more supports for students in other ways now, too, he said.

Some colleges and and universities around the country are taking steps to become more inclusive and welcoming to undocumented students as well. Last year, the University of California, Davis opened an undocumented student center, unique in its focus to meet the needs of this specific group. Other schools have assigned staff liaisons and provided meeting space for student-led DREAMer groups.