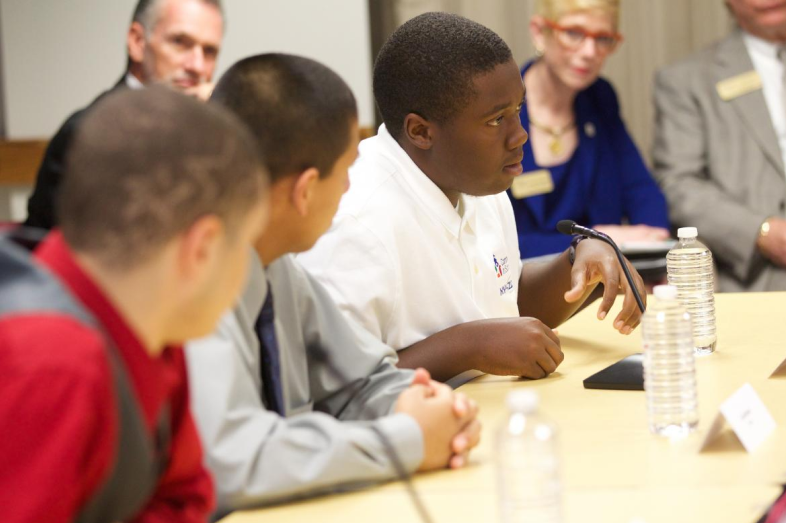 ‘My Brother’s Keeper’: Is It Working?

The goal is simple: create a “cradle-to-college-and-career strategy” to lessen the achievement gap among boys of color. But implementing My Brother’s Keeper – a White House initiative rolled out in February — may be more complex than it sounds.

In an article for Education Week published Monday, Denisa Superville reports on the challenges some school districts are facing — namely funding and getting school personnel to confront possible personal biases. And critics point out that this isn’t the first time schools have tried similar measures to close the achievement gap — and failed.

Still, with a good portion of the nation’s large-city school districts on board, it seems work is getting done.

While the intent of MBK — “to improve the life outcomes of all young people to ensure that they can reach their full potential, regardless of who they are, where they come from, or the circumstances into which they are born” – isn’t necessarily unique to the initiative, the difference this time is that districts all over the United States are rallying to the call to action simultaneously, Long Beach, Calif. school board member Felton Williams told Superville.

“It’s not just one district that’s moving on its own. They are moving as part of a collective whole. The difference with what you’re seeing now is synergy. Everybody is rowing the boat in the same direction,” he said.

Could this give MBK an advantage toward success?

In a recent interview with Education Dive, Coalition of Schools Educating Boys of Color Executive Director Ron Walker spoke to the importance of a national backing.

“…I would say on a national level, as we see with My Brother’s Keeper, there has to be a national commitment to excellence in education for all students. I’ll give you an example: When I grew up, it was during the era of Sputnik. That’s what I heard about in 1954. I was in elementary school. Suddenly, we had a challenge from the Soviet Union at that time to take the lead in the space race. What happened was a national commitment to science, to math, to say that the United States of America was not going to be surpassed by another nation.”

“…That’s where I think My Brother’s Keeper is making this national call, saying in order for America to maintain its position as world leader, it has to educate every student coming into the schoolhouse, and do it well, to the level where we will not be surpassed. That has to be the national mindset,” Walker continued.

The initiative has made for key talking points across the country and was recently the focus of the 2014 Congressional Black Caucus Foundation Annual Legislative Conference in Washington, D.C., where discussions centered on not only the achievement gap but also discipline disparities between students of color and their white peers.

The Council of the Great City Schools – in whose member districts 38 percent of students are Hispanic — has 61 of its school systems involved in MBK. Michael Casserly, executive director of the council, said the group has developed its own set of statistical indicators to hold itself accountable for the performance improvement of Latino and black males. The process will include getting data from districts on key measures, such as third grade reading proficiency, course-completion rates, suspensions and attendance, Superville reports.

As stated on the White House’s website, the six goals of the My Brother’s Keeper challenge are as follows:

It focuses on five milestones: