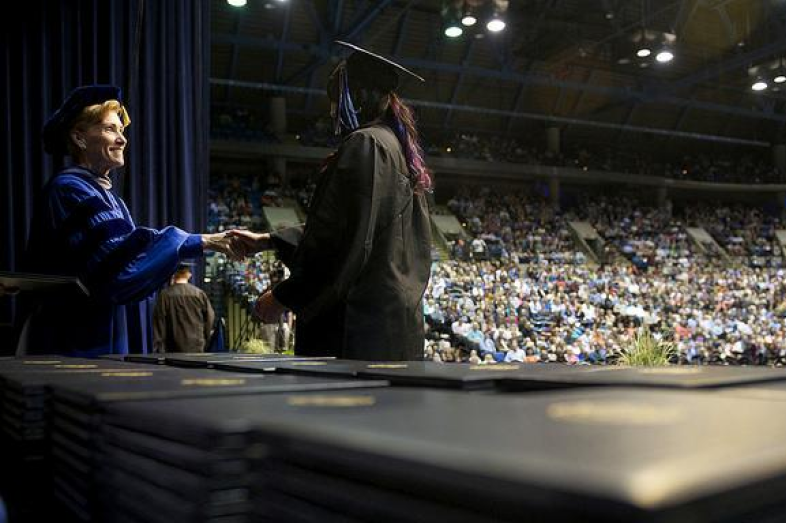 Report: Latino College Graduation Rates Are Up, Yet Gaps Persist

A new report analyzing a decade’s worth of college graduation rates at more than 1,300 four-year colleges and universities reveals both positive and negative findings for Latino students.

The good news: Of the underrepresented minority groups on college campuses, Latinos saw the largest gains in graduation rates between 2003 and 2013. The bad news is that significant college completion gaps persist.

The authors of “Rising Tide: Do College Grad Rate Gains Benefit All Students?“ released today by The Education Trust write that far too many institutions are not narrowing longstanding gaps between white students and their underrepresented minority peers, which include Latino, black and Native American students.

They found that while graduation rates among the minority groups increased 6.3 percentage points — compared to 5.7 percentage points for white students — the improvement rate is narrowing at far too slow a pace to close completion gaps, at least in this century.

At the 328 four-year institutions that raised their graduation rates (of the 489 public colleges studied) the gap between white and underrepresented students narrowed by three-fifths of a percentage point, leaving a 14-point completion gap, according to the report.

“We caution institutional leaders who celebrate their graduation rate gains to take a good look at their data and ask whether they are doing enough to get more African American, Latino, and Native students to graduation and to close completion gaps,” Kimberlee Eberle-Sudré, co-author of the report and Ed Trust’s higher education policy analyst, said in a news release. “Fewer than half of the institutions we analyzed raised rates for their underrepresented students and cut gaps.”

Among the 26 schools recognized in the report for narrowing the gap are Hispanic-serving institutions San Diego State University, San Francisco State University and Rutgers University-Newark, where Latinos make up at least 25 percent of the student body.