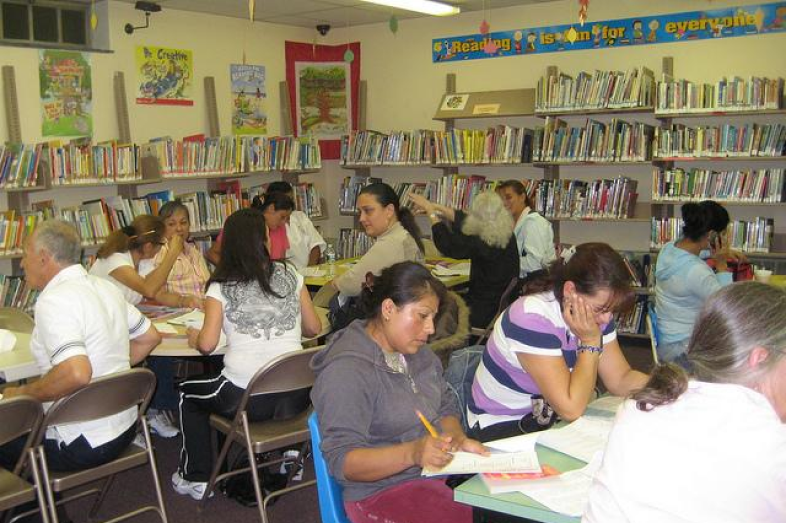 School districts in Texas’ Bexar County are offering more options for parents to further their education in order to get more involved in their children’s, including after-hours classes in learning English as a second language or preparing to a GED.

“Districts see the centers as an answer to what educators regard as a particularly tricky challenge for the inner city, where parents’ past negative experiences in school, language barriers, poverty and work schedules often limit their involvement in their children’s schooling,” wrote Francisco Vara-Orta in an article for the San Antonio Express-News last week.

Vara-Orta interviewed Latin American immigrants who said they were at the center to become better parents. For example, one Mexican man with the equivalent of a ninth-grade education was taking ESL classes to learn the only language his grandchildren know.

“Spending resources to promote parent involvement is the same as making an investment in our students,” area Superintendent Rey Madrigal told Vara-Orta. “The more the family is involved, the greater a student’s chances are of achievement, graduation, and the desire to pursue a higher education.”

He’s not wrong. Studies show family involvement in a child’s education is an important contributor to school success and completion – the most accurate predictor being how much a student’s family encourages learning.

As I wrote in a previous Latino Ed Beat post on parental involvement, a 2007 study by The Tomás Rivera Policy Institute at the University of Southern California found Latino parents are no less interested in their children’s education than non-Latino parents but see language and their own education levels as barriers for getting involved.

“Since over half of the study participants had not completed high school and most spoke Spanish at home, the parents in the focus groups had mixed views on whether they should engage with homework in light of their own limited formal education,” the USC study states.

And because many Latino parents work for hourly wages – Hispanics are the racial and ethnic group most likely to receive poverty-level wages – lack of time also comes into play. The parents surveyed felt their employment would be at risk if they frequently submitted requests for time off.

So, what can school districts do to reach these parents?

One website for English language learners suggests schools engage parents — like Bexar County schools are doing with parent centers — by making them feel welcome on campus. Immigrant families may be unaware of the opportunities available to them, but offering ESL, literacy and parenting classes or letting them know about such opportunities offered in the community can make a difference.

“We understand that some people think we are taking,” one participant in the after-school parent programs told Vara-Orta, “but when you get to know us, you’ll realize we are working hard, actually do pay taxes, and want to be better citizens who contribute more, as it’s something we’ve fought hard for, here, to survive. We are all here . . . because we are trying to figure out how to become better as parents.”

We had some other great work related to Latino education by EWA members last week. Check out First Generation Student: “We Carry A Different Weight On Our Shoulders” by Laura Isensee of Houston Public Media and Unaccompanied Minors Bring Hope, Past Trauma to American Schools by Lillian Mongeau of The Hechinger Report.