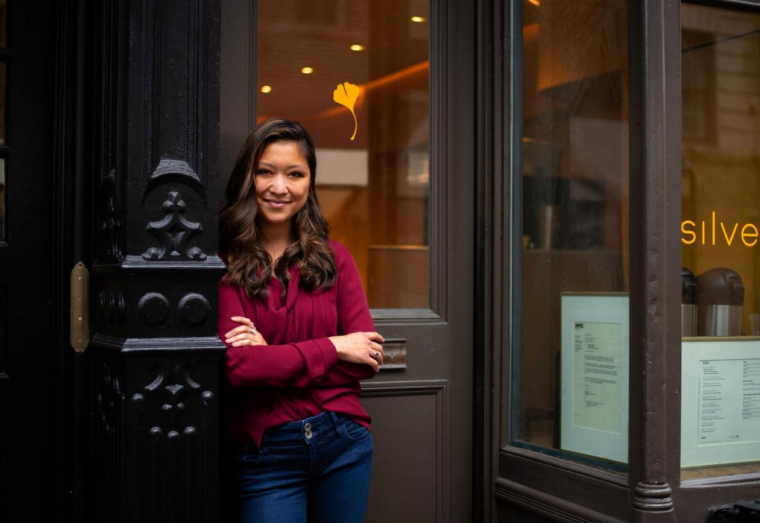 EWA Member Emmeline Zhao turned a side hustle into a second career.

After a full day of overseeing The 74 Million’s reporting projects and multimedia offerings on COVID-19’s impact on educational inequities, Emmeline Zhao quickly shifts to her second career: Managing a new Greenwich Village restaurant that the New York Times has praised as a delicious “synthesis of Chinese ideas and the Hudson Valley farm-to-table movement.”

Zhao, who is also a sommelier and fromagier, visits Silver Apricot each evening, typically working at the restaurant until 11 p.m. She says she gets five or six hours’ sleep “on a good night.”

But she’s had plenty of bad nights since the pandemic. The dining restrictions forced her and her partner to shut down three of their restaurants.

“I think that when the highs are high, well, the highs are very high, but the lows are very low. I’m not ashamed to admit that I cried more times this year than in the last five,” Zhao said.

As hectic as it sounds, Zhao said she prefers her current schedule to her previous journalism-focused professional life at another news outlet, where she felt burnt out and disillusioned working as a “breaking news monkey.”

In this member spotlight, Zhao discusses how a local COVID-19 reporting strategy illuminates cracks in the education system, the changing role of the education reporter, and how she turned a side hustle restaurant job into a full-time second career.

Your role at the 74 has you managing an education pandemic project that features local reporters across the country – from D.C., Cleveland, San Antonio, New Orleans and New York City – following their local school districts handling of the coronavirus. What was your vision for this project?

We knew [being based in New York City], while we had a finger on the pulse of larger school districts, what was critical for us to understand was how smaller districts were responding to [the pandemic]. We really wanted to look to people who were problem-solving on the ground.

Since [the coronavirus led to] many more local papers laying off their staff, we felt that if we could re-employ some of those people, then we’d be doing something good for our industry as well. We had about a week to put together a proposal to fund this initiative, to hire an editor and three to five reporters dedicated to covering the pandemic as it relates to schools, families, children, educators and administrators. And it was important for us to have them in different pockets of the country so that we can understand how different geographies are responding to a time of crisis.

What are you seeing as common themes from local news across the country?

First, the major takeaway is that we all need to learn from each other.

We’ve always known about the disparities between wealthier zip codes and less privileged zip codes. But the pandemic has definitely shown us how stark those disparities are.

We’ve also learned that the heroes in this are our teachers. We’ve had so many stories of educators who went out and did personal rounds of handing out laptops and handing out textbooks and calling students personally checking in with them on a day-to-day basis. They’re the ones doing this incredibly hard and important work. And we really need to be able to recognize that in some way.

While you’ve been managing this project, you’ve also been deeply involved in managing multiple restaurants and opened a new location in July 2020. How did you wind up in the restaurant industry?

It [initially] happened because I was a young journalist at the time, kind of burned out and exhausted from the work that I was doing. I was in a newsroom where I was effectively a breaking news monkey. You start going through this existential crisis of whether you are miserable because you hate the work that you’re doing or what the industry represents. I got into journalism to be a watchdog and for storytelling. [That job] wasn’t like journalism to me, I was just creating fodder for the day, and that’s just not the kind of work that I want to do. So I had a moment where I thought about quitting journalism and leaving the industry altogether.

I read more food blogs than news posts on the website that I worked for. So I ended up applying for a bunch of restaurant gigs with no experience. I started as a host and worked my way up. It was at that first restaurant that I met [chef and co-owner] Simone Tong. We opened our first restaurant together in 2017, and opened two more locations over the course of two or three years. Unfortunately, all three of those locations have since closed because of the pandemic.

But we also already had this new concept in the works from last year. So it was kind of fight or flight. We were supposed to open in March, then the world shut down. So the project was placed on hold for a few months. We finally opened in July – in the middle of the pandemic. But it at least gave us a little bit of time to adapt.

That restaurant, Silver Apricot, was a critic’s pick in The New York Times. What was your reaction reading that?

Frankly, had you asked me 10 years ago, I probably would have thought that I would have seen my name in the Times sooner as a byline.

I don’t know, it feels odd. It feels like I feel like I should be proud of it. But I can’t get myself to feel proud of it because I feel extremely fortunate and very lucky. It’s odd to be in the time we’re in right now and celebrate something.

But that’s not to say that I’m not extremely proud of the team that I have. I couldn’t have done it without them. I think that that’s something that has become so evident this year, not only in the restaurant, but also my team at The 74. [I realized] just how important and incredible the people I surround myself with are, and how critical they are to my overall success and well-being.

As much as we look at 2020 as a very difficult year and one of struggle, the one thing that I have said is great triumph can come from tragedy. There’s so much triumph that has come and will come out of this.

Do you have a favorite dish from your restaurant?

That’s an impossible question. I mean, everything is great, but the crowd favorite is this dish that we call scallion puffs that we serve with scallion butter, they’re a pastry spin on scallion pancakes. So what we do is take the puff pastry and roll it up into these little bite-sized things that look like mini cinnamon rolls, but they’re actually savory. So those are fun.

You’re also a sommelier. Is that something that you learned specifically for this restaurant opening or did you always have an interest in it?

I have a very obsessive personality where if I start something, it’s very hard for me to stop or to quit until I’ve completely exhausted (it.).

When I started to have to talk about wine to sell it, I always wanted to have an answer for (customers). I also wanted to have an answer for myself, because the more that you taste wine, the more that you understand that each is very different, even if it’s the same grape variety, from the same region, even from the same producer. From two different plots of land, it can be completely different. Maybe this is the journalist in me, but I was constantly wondering why is this the case? This logically should not make sense. So I got in deeper and deeper.

Considering the journalism world and restaurant world are really merged together for you, do you see these as overlapping skill sets, or have you brought any lessons from one role into your other?

It’s definitely intertwined. Management is massive in restaurants; managing not only your team, but also managing your guests. That really has helped me become a better manager,  better team player and better communicator.

My journalistic experience also helps a lot with the restaurant because we deal with a lot of media inquiries all the time. When you don’t have a dedicated PR person, you have to take on that yourself.

But, you know, food journalism is so different from education journalism that there isn’t a whole lot of cross section. I do find myself being really annoying, like a sound-biter, though. I’ve definitely honed the art of not directly answering the question.