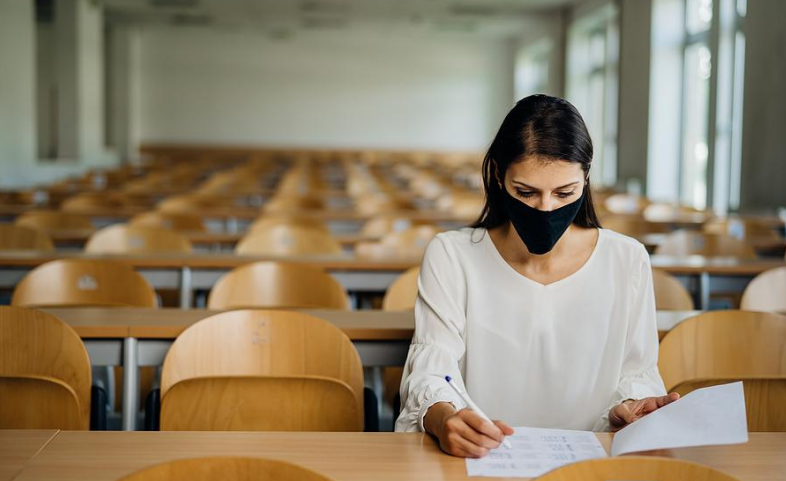 Prom, graduation, the SAT. For decades, those three springtime rites of passage have been important steps for American teens marching toward adulthood.

But the coronavirus pandemic upended those traditions for the 3.7 million students in the high school class of 2020.

Arguably, most disruptive for students was the widespread cancellation of the SAT and ACT exams, which have traditionally been heavily weighted in college admissions. Hundreds of higher education institutions have made the tests optional for applicants in response to the pandemic, setting off a huge shift in the college admissions landscape.

The test-optional movement is an opportunity for policymakers, journalists and the public to deeply consider how standardized tests have been and could be used in college admissions, according to panelists at the 2020 Education Writers Association’s Higher Education Seminar. The speakers noted that reshaping test policies, perhaps permanently, could make access to higher education more equitable, especially for low-income and first-generation students.

“I think this is a great moment for us to really evaluate the tests and their use in admissions decisions,” said Sharon Collins, a math teacher at New Heights Academy Charter School in New York City, who spoke on the panel.

Collins and her co-panelists, Jim Bock, the vice president and dean of admissions at Swarthmore College, and Akil Bello, the senior director of advocacy and advancement at the test-skeptical advocacy group FairTest, all noted that long before COVID-19, colleges’ reliance on SAT and ACT scores was controversial. Why? For one thing, scores are highly correlated with family income, reflecting realities such as wealthy families’ ability to pay for test prep. And there is conflicting research over whether the scores do or don’t accurately identify which students will thrive in their college freshman classes.

The panelists identified key questions education reporters can dig deep on as they cover the impact of this year’s test waivers on college admissions, and its effect on  equity and inclusion. (For more resources, check out EWA’s College Admissions Topics page.)

Who is taking the test, and who isn’t?

Despite the pandemic, the numbers of tests during the 2020 academic year fell only slightly. The number of SAT takers fell from 2.22 million for the class of 2019  to 2.198 million for the class of 2020. For the ACT, test-takers fell from 1.8 million to 1.7 million. (Remember that some juniors and international students take the tests, and some students take both exams.)

But the class of 2021 is facing more difficulties, since the pandemic forced many physical test sites to close (about 30 percent of SAT locations have closed, for example), and those that stayed open offer fewer spots in order to meet public health guidelines. Attempts to proctor tests online, meanwhile, have been bumpy due to safety and cyber-security issues.

Reporters can check to see who is taking the tests now in their coverage area despite the difficulties. The panelists said they are seeing at least three major groups:

Wealthy students are traveling to find open testing sites, according to the panel’s moderator, Jeff Selingo, a former editor of The Chronicle of Higher Education and author of the recent book “Who Gets In and Why.“If you have the resources, it seems you’re trying to get a test,” he added.

Students aiming at competitive schools looking for anything to give them an edge are also prepping for the admissions tests despite the pandemic, says Collins.

Students who need significant financial aid to afford college continue to try to take the tests because many scholarship programs still require them, Collins added.

What are the equity implications?

For many low-income and first-generation students, the option to skip sending standardized test scores is an opportunity to shift colleges’ attention to other evidence of their talents and accomplishments, such as their grades or leadership roles in extracurricular activities, Collins said.

Well-resourced colleges with goals of diversifying their student bodies, such as Swarthmore, give admissions officers the time, support and ideal of analyzing each applicant in the context of their school and background, explained Bock. At schools such as Swarthmore that practice “holistic” admissions, the officers ask: “Is the student outperforming his or her context?”

Bock added: “We look at the background, we look at whether they are the first generation in their family to attend college. Is their high school public? Is it private? What is the rigor of the curriculum? What access and resources did they have? We don’t just look at the grades, but the trends. Are grades going up, are they going down?”

But the test-optional movement in college admissions offices is far from a panacea. Fewer than  300 of the nation’s more than 2,000 colleges have the resources and motivation to do the kind of holistic evaluation of elite schools like Swarthmore, a private liberal arts college that accepts fewer than 10 percent of applicants, noted Bello. Instead, he said, most large public universities rely on some basic screens, using factors such as courses taken and grade point averages.

And some research indicates many of the replacement factors admissions officers may use are biased and can discriminate against those from disadvantaged backgrounds.

Teachers at high schools in wealthy communities hand out more “A”s than do teachers at schools in lower-income districts, raising questions about the equity impacts of relying on a simple GPA cutoff, for example. Or admissions officers may give extra marks for participation in expensive sport programs or activities that aren’t available to disadvantaged students.

Even recommendation letters may have surprising biases. A study cited in Selingo’s recent book, “Who Gets In and Why,” analyzed 17,000 recommendation letters written for applicants to selective universities and found that math and science teachers wrote less positive letters than English or social studies teachers. Also, female teachers and counselors gave more positive reviews than their male counterparts, even when they were writing about the same applicant. And regardless of the teacher’s gender, they wrote longer and more positive letters for female applicants, he said.

What’s more, the advantages test-optional policies in admissions can give to disadvantaged students can be wiped out if colleges deny them financial aid they need to afford the school because of their lack of high scores.

So reporters who want to dig into the equity impacts of colleges’ new test-optional policies should “ask the colleges or universities they cover: Are you test optional for admissions and for financial aid?” Selingo suggested.

He also encouraged reporters to investigate the “profiles” their local high schools send to college admissions officers in an attempt to win more acceptances for their students.

“I don’t think many reporters even know these exist,” Selingo said. “In some cases they’re literal advertisements…saying how great we are and trying to persuade the admissions officers how great the students must be as well.”

Bello asked reporters to research the impact of test optional policies on the larger public schools that serve the vast majority of American undergraduates, and which are more likely to have used more simplistic “admissions grids.”

“Test-optional for those places is a different question,” he said.

What is the future of college admissions tests?

Over the short term, most colleges are continuing their test-optional policies during the pandemic (a list of test-optional schools is maintained by Fairtest), and the logistical difficulties will continue to discourage many potential test-takers.

And even before the pandemic, a growing number of colleges had already decided that test scores were not helping them select better students for admission. The University of Rochester, for example, went test-optional in 2019 stating, “Standardized tests added little extra value to our review process…Even well-constructed tests don’t lead to better (admissions) decisions, and the cost to students having to take and submit those extra exams outweighs any benefit to us.”

But that doesn’t necessarily mean that college admissions tests will become extinct over the long term, the panelists said.

For one thing, the test-makers have financial incentives to persuade schools and students to keep taking them, said Bello. While technically, the organizations that run the SAT and ACT are nonprofits, they count on test fees to fund their operations, so their staff are highly motivated to get ever more students to take ever more tests, says Bello. For example, both organizations have lobbied school districts around the country to require their test so that districts can document students’ supposed “college-readiness.”

Also, even if they stop requiring the SAT or ACT, many colleges hope students will continue to take the PSAT as sophomores or juniors, since that is basically an early identification system for college recruiters.

“Students who take the PSAT can share that information with colleges and that’s how we build our pools” of students who will get bombarded with fancy brochures and other recruiting material, Bock explained.

Whatever happens to the admissions tests, however, college students will still face plenty of exams. Schools are increasingly asking incoming freshmen to take placement tests to see what levels of math and other core courses the students should start at, for example. And instructors will no doubt continue to administer exams for grades in their courses.

Still, the current national experiment with test-optional college admissions could lead to profound changes in higher education, said Collins: “I’m very hopeful that this is a moment for us to really think about college admissions and then really move beyond that,” to focus on college persistence and graduation, she said.