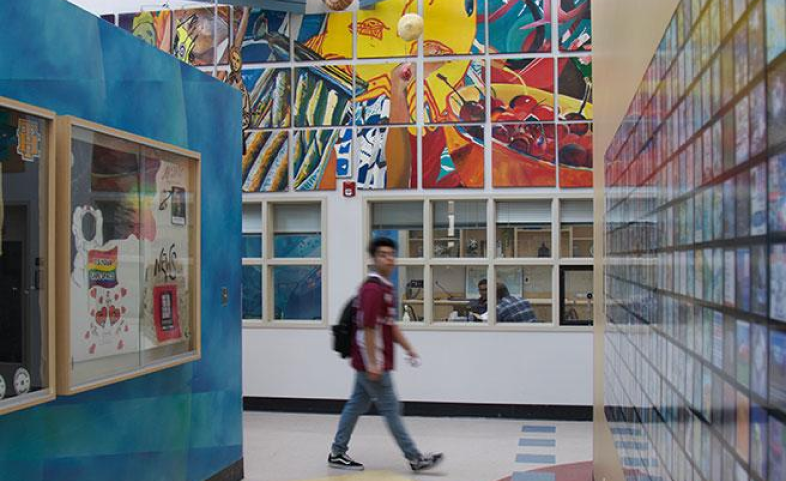 At High Tech High, Focus Goes Beyond the Classroom

Walking onto a High Tech High campus is like entering a workshop. Our tour guide, sophomore Caroline Egler, pointed out classrooms that supposedly housed physics or humanities, but most students weren’t in those rooms. They were in the hallways working on projects, huddled around computers together, or even working at desks standing eight feet tall so they towered above the floor. It was chaotic, but not out of control.

Students seemed to be working with purpose, even if it was not immediately obvious what they were doing.

It’s not always like this, Caroline assured us, a group of education journalists visiting as part of the Education Writers Association’s recent seminar on high school redesign. Students at this campus of the San Diego-based charter network seemed more frantic than usual because they were rushing to finish projects they’d been working on all semester, she said. They’d be exhibiting their work to real-world audiences at the end of the week.

Caroline explained that she was making a podcast — complete with original music composed by a friend — about differing views on President Trump’s proposed border wall with Mexico. Other students in her class were exploring topics like drug trafficking and sexual harassment; the only requirement was that the project relate to the border. It was a shared project between Spanish and humanities classes.

Each student had to develop a physical product representing what they learned and exhibit it at the Mexican border. The whole project was coordinated with Mexican students they had been working with over Skype since the class began. These kinds of community-grounded events are part of what High Tech High calls real-world work. The learning and its products are displayed not just to teachers, students or even parents, but to a larger community of experts. That gives school assignments more relevance — the work actually matters to the world.

The other thing visitors immediately noticed about the school is the incredible work hanging from ceilings, lining the walls, and built into the hallways. Photographs, a bridge to nowhere, self-portraits, full-sized boats, weather balloons, robots – beautiful work is celebrated at the school and its constant presence reminds students of the high expectations their teachers set for them. 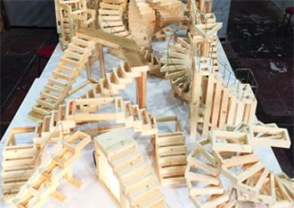 As part of a combined project for their physics and art classes, 12th graders designed “Staircases to Nowhere”. (Photo courtesy of High Tech High)

The High Tech High network mostly operates on the California per pupil funding formula, but it chooses to allocate its money very differently than many other school systems. High Tech High doesn’t have athletic fields or a library or textbooks – all pricey areas where the school saves some money. It also offers few class choices to students; for the most part, students take classes that satisfy the University of California’s A-G requirements. And many teachers have dual credentials, allowing them to teach multiple subjects or combine subjects.

But what seems like a lack of choice in classes isn’t as limiting as one might think. The charter network’s schools are built around four essential design principles: equity, personalization, authentic work, and collaborative design. While those guiding principles are at the heart of every class, there’s a lot of variety in every other way. And students are encouraged to pursue ideas they’re passionate about, which allows for some of the choice they might otherwise lack. (For more on how some of these ideas come together, take a look at a guide to decoding ”deeper learning.”)

For example, Aaron Price is in the same humanities-Spanish class as Caroline Egler, but he built a data logger that he attached to a weather balloon. He used it to measure CO2 levels at the border, part of his team’s investigation into the shared environmental concerns in the U.S.-Mexico border region. Aaron’s physical work product was more technical, but he also wrote and published a research paper, as well as a website with his findings.

It’s almost like Caroline with her political podcast, and Aaron with his weather balloon, are in two different classes. That’s what personalization looks like at High Tech High schools, and it’s why students don’t mind that the course catalog is limited.

The charter network accepts students through a lottery that randomly takes a certain number of students from every zip code in San Diego. Since the city, like many others, has neighborhoods that are racially and ethnically isolated, this ensures the student body reflects San Diego’s population.

Personalization at High Tech High is a partnership between the teacher and student to find an authentic project that genuinely motivates students to produce beautiful work. And, because teachers have a much lighter student load than the average high school — seeing between 50 to 100 students per day in core content classes – they can push the young people they work with to reach individual goals.

“It means you and the student are going to work together to design something that’s going to be academically relevant to what you’re trying to teach them, but also personally meaningful to the student,” said Russell Walker, an 11th grade history teacher. He designs the broad strokes of the project, but students take it in many different directions.

“If you’re saying, ‘Here’s this project and you’re all going to make the same thing,’ that’s not really very interesting. They’ll just copy what you did.”

Walker used to teach Advanced Placement environmental science at a high school in Los Angeles, where he taught 150 students each day and was expected to help as many as possible pass the AP test. Walker said not only was that uninspiring to him as a professional, it drained his creativity because he spent hours handling the minutiae of lesson planning and grading.

“As a teacher, it’s way more fun and interesting to work here,” Walker said. “And I think a lot of teachers who are burned out or losing hope on the way things are running could benefit from shifting to [project-based learning].”

Another High Tech High teacher, Mike Strong, agreed that one of his favorite things about the school is the autonomy it offers him. Teachers are treated as professionals and are allowed to be creative, he said. That’s a tall order, and can be exhausting, but it’s much more exciting. And when teachers are given autonomy, they tend to transfer it to students as well.

Caroline, the High Tech High sophomore, said her teachers trust her — something she’s come to expect.

“Teachers trust that if they put [students] outside of the class and let them go, that the students are going to be diligent and get to work,” she said.

If a particular student fails to live up to her end of the bargain, or is flagrantly disrespectful, the teacher can take away privileges. The school doesn’t give detentions and only rarely suspends or expels students, according to Caroline. Instead, students will have a conversation with the teacher about their behavior and will be asked to think of a way to make amends.

Later in the school tour, we met two ninth grade boys who were working to finish a physics project. They built a marble box to show that when a marble rolls down the slope and picks up energy, it emits a photon. Neither boy had attended High Tech High in the elementary or middle grades, but they said they liked the more independent learning style.

“The transitioning was only difficult because I came from a very generic-working school,” one boy said. He often felt stressed out at his middle school, he said, because his teachers only gave him one shot to complete an assignment. If he messed up, his grade would suffer. That anxiety was compounded by the fact he was sure his math teacher disliked him.

Aside from the small class sizes, autonomy, project-based curriculum, freedom to design classes based on loose themes, and expectation that students will create work that experts will want to evaluate, High Tech High is different from the conventional high school in other ways. Students aren’t tracked, and there are no AP classes. All students can opt into honors-level work, which comes with a few different requirements but doesn’t separate them into a different section. Crucially, students decide whether they want to be on the honors track two to three weeks into the semester, which gives tentative students the opportunity to try out honors-level work before committing.

“We’re trying to be creatively compliant,” said Randy Scherer, who leads the High Tech High Graduate School’s professional development program to support project-based learning. “We have to do something so people will recognize it. But we really want everyone to be in honors.”

And the High Tech High network doesn’t claim to have everything figured out. Teachers and administrators continually tinker with different aspects of the program.

“There’s no arrival,” said teacher Mike Strong about the continual emphasis on innovation in working at High Tech High. “Some of the practices we push on students, like reflection, teachers do that as well. There’s constant critique and revision for even things like how we have meetings.”

That can become exhausting, but it’s also what keeps schools in the network from getting so comfortable they stop trying new ideas.