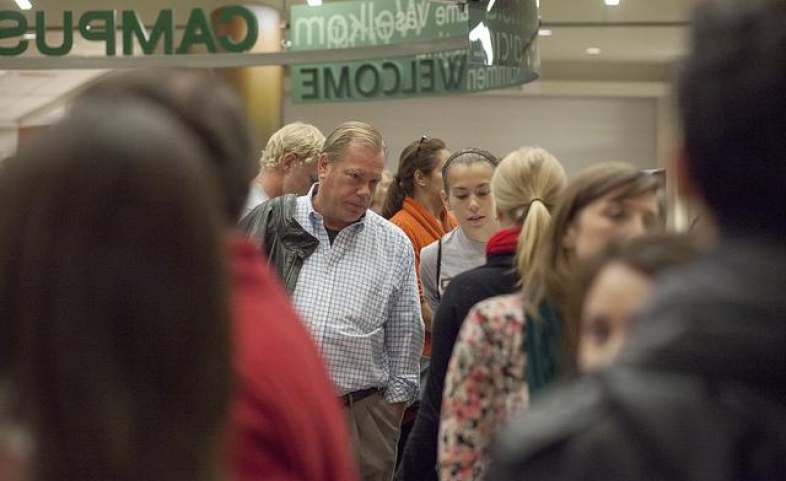 Does Applying for Financial Aid Have to Be This Hard?

A lot has changed about applying to college, but one thing that has endured for generations is the dreaded FAFSA. The Free Application for Federal Student Aid — which more than 19 million Americans filed in 2014 — remains the single most important financial-aid application form that students must complete to qualify for student aid, scholarships and loans.

A lot has changed about applying to college, but one thing that has endured for generations is the dreaded FAFSA.

The Free Application for Federal Student Aid — which more than 19 million Americans filed in 2014 — remains the single most important financial-aid application form that students must complete to qualify for student aid, scholarships and loans. First lady Michelle Obama last October launched the “FAFSA Completion Challenge,” urging high schools to share student-produced videos about how they are increasing their FAFSA completion rates.

Yet the FAFSA form itself has been a major obstacle in getting some students the financial help they need to attend college, panelists said during a workshop at EWA’s National Seminar in Chicago this spring.

Kim Clark of Money Magazine, who moderated the panel, entitled, “Can FAFSA be Saved?” opened the discussion by pointing out that high school juniors choose where to apply for college without the answer to the most basic question: How much will college cost?

Bad timing is one reason. Students who file their FAFSA forms for the first time beginning in January of their senior year, Clark noted, have already applied to colleges. So they don’t know how much aid they’ll receive and what college will cost them until after they’ve already applied.

The FAFSA also doesn’t take into account a family’s medical expenses, Clark said, or whether the parents are paying off their own student loans. And the formula the U.S. Department of Education uses to come up with the “expected family contribution” can be misleading. For example, Clark said, 95 percent of students with family incomes below $30,000 pay more than their so-called EFC.

The forms also can be confusing, which increases the likelihood of errors.

“Many of the mistakes that are made are based on how the FAFSA presents the information and how it asks the questions,’’ said Alana Mbanza, a college and career coach at the Dr. Martin Luther King Jr. College Preparatory High School in Chicago. Students can correct their mistakes later, she said, but if they don’t do it in time they may miss the financial aid application deadline.

What’s worse is that some students don’t even file the forms. About 2 million students nationwide whose family incomes would have made them eligible for a federal Pell grant failed to file a FAFSA, said Ed M. Pacchetti, who took a leave from his job at the Federal Student Aid Office to do a fellowship at the Bill & Melinda Gates Foundation. That figure is from a study of filings in the 2011-12 academic year by Mark Kantrowitz, a national expert on the subject who once suggested that the FAFSA could be simplified to fit on the back of a postcard. His study showed that about 1.3 million of those students would have qualified for full Pell grants, which puts the amount of unclaimed federal aid at more than $750 million.

The panelists agreed that more people would file the forms if they were simpler and more useful in calculating the cost of college. One way to do that, Pacchetti said, is to drop the questions that very few students answer. Another is to allow filers to use the information from their last completed tax filing, or “prior, prior year data.” That way, students could file the FAFSA in the fall of their senior year, at the same time they’re applying to colleges.

That’s a change several of the panelists said they supported, which prompted Clark, the moderator, to ask why not just do it then? One problem, Pacchetti said, is that more students would apply for aid. But isn’t that the goal? Clark responded. Yes, he said, “but there’s a cost to it.”

Other suggestions for making FAFSA filings easier would be to allow filers to download their actual tax information directly into the FAFSA form and thereby bypass the verification process, said Jesse O’Connell, the assistant director for federal relations at the National Association of Student Financial Aid Administrators.

For all the complaints about the FAFSA, O’Connell said, some of the barriers to filing are more perception than reality. The average FAFSA completion time last year was 20 minutes, O’Connell said, and for those filing renewals the average was nine minutes

“I think we’ve let the perception of how hard it is outstrip the reality,’’ he said.

The talk about simplifying the FAFSA is not new, said Michelle Asha Cooper of the Institute for Higher Education Policy. In fact, she said, it dates back to 1992, when the FAFSA was “simplified for the first time.”

In 1997, the FAFSA was put online, she said, and in 2007 the U.S. Department of Education stopped mass-producing the paper forms. The needs tests also have been simplified, she said.

“This is just an evolution,” Cooper said.