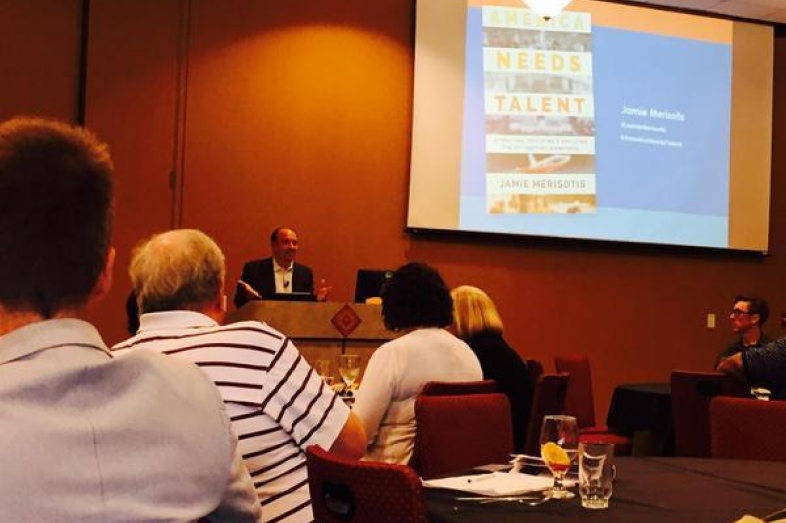 Does the United States Need a Department of Talent?

The United States government needs a Department of Talent to coordinate its education, labor and immigration agencies, the head of one of the nation’s largest education foundations said last week.

“Think about an agency that could develop and implement strategies for linking standards-driven K-12 education and higher education, with high-quality locally managed workforce development programs and with highly focused global recruitment strategies,” said Jamie Merisotis, president and CEO of the Lumina Foundation, during the Education Writers Association’s 2015 Higher Education Seminar at Valencia College in Orlando, Florida. “This kind of interconnected approach would surely help us as we seek to close the nation’s workforce gaps.”

In his new book “America Needs Talent,” Merisotis argues that skilled labor in the United States is managed in a largely outdated way, relying on 20th century assumptions about the role colleges play in producing graduates who are ready for the workforce. Fifty years ago, colleges were reserved for the leadership class, while a high school diploma was sufficient for work in manufacturing that generated middle-class jobs. Today the terrain is different: Manufacturing comprises a much smaller slice of the jobs available, and the skills required for blue-collar work generally require some postsecondary education.

The economy may be recovering from its recession nadir, but the high-paying jobs currently available almost entirely demand a bachelor’s degree. A recent Georgetown University study calculated that of the more than 6 million jobs developed since 2010, 2.9 million are what they’d call well-paying positions – and all but 100,000 of those required at least a bachelor’s.

That report also found that middle-skilled jobs, those that may call for a college certificate or associate’s degree, are far below their pre-recession levels, even though college attainment hasn’t lagged.


The disconnect between the talent that’s out there and the jobs available to these workers frustrates Merisotis. At the conference, he also said that he is troubled by the toxic political debate about immigration and argued that rather than alienating new residents, a Department of Talent would work in concert with education and labor authorities to attract foreign workers with low-, middle- and high-skill credentials. “Today’s immigration policy needs to take a different path,” Merisotis said. “One rooted in enhancing the talent needs of the country through a deliberate skills-based policy model while using improved education policies to educate the immigrants who are already here.”

“How would our immigrant parents and grandparents fared in the current system?” says @jamiemerisotis #ewahied

But Merisotis also noted that a public policy geared toward talent risks excluding the contributions of other workers whose skills may not be as developed. “I reject the idea that our talent strategy should only be focused, down at recruitment strategies, should only be focused on the high end,” he said. “I think it’s a very dangerous proposition for our country.”

In addition to creating a Department of Talent and retooling the nation’s immigration policy, Merisotis suggested other reforms that he says would supercharge the United States’ ability to develop talent:

Merisotis warned against communities where “the locals who are often low-income and minority population are left behind in the urban renaissance that attracts those newcomers.”

To that end he commended Grand Rapids, Michigan, for offering “multiple pathways to success for all types of people” by integrating the city’s various postsecondary, business and government resources to find efficient ways of addressing the mismatch between worker talent and employer expectation.