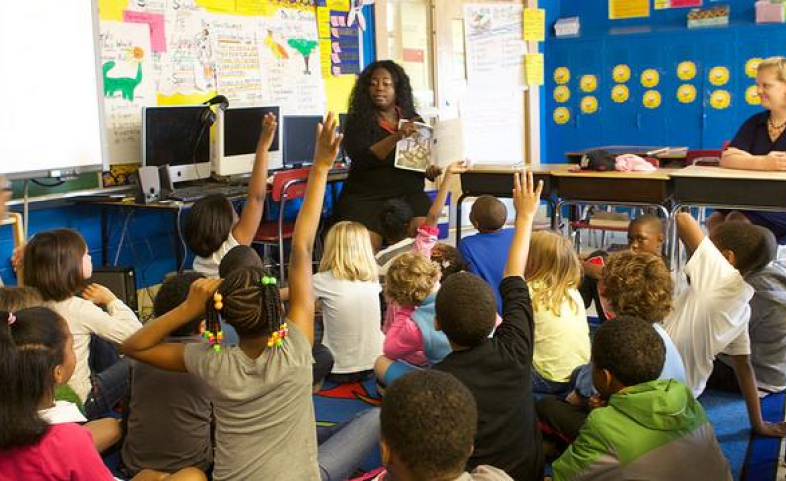 Nationally, the number of minority teachers is increasing, but it’s not keeping pace with student demographics, concludes a new report issued by a union-affiliated think tank.

Nationally, the number of minority teachers is increasing, but it’s not keeping pace with student demographics, concludes a new report issued by a union-affiliated think tank. The gap in parity between minority teachers and minority students remains wide. And that’s particularly true for African-American kids in nine large urban districts, according to the researchers’ findings.

The data put the spotlight on the longstanding lack of diversity in the U.S. educator workforce. It’s been a concern for decades, and one that many school districts say they’re struggling to address. (At the same time, overall teacher quality is also a concern, and there’s no shortage of reports concluding that low-income, black, and Hispanic students get a disproportionate share of inexperienced, and less effective, teachers.)

The Shanker Institute (funded by the American Federation of Teachers) authored the new report, released this week. It focuses on nine cities, including many of the nation’s largest school districts: Boston, Chicago, Cleveland, Los Angeles, New Orleans, New York, Philadelphia, San Francisco and Washington, D.C. In each location, the number of black teachers declined from 2002 to 2012. While the number of Hispanic teachers held steady or increased slightly, it wasn’t enough to keep pace with the sizable jump in the Hispanic student population.

“Looking at this data, it seems to us that we’ve reached a crisis in urban education as it pertains to teacher diversity,” said AFT president Randi Weingarten during an event in Washington, D.C. to release the report. She called on President Barack Obama to hold a summit on teacher diversity.

Indeed, in D.C., the turnover rate could be considered shocking. Elizabeth Davis, president of the district’s teachers’ union, noted at the event that black teachers plummeted from 70 percent of the teaching force in 2003 to 49 percent in 2011.

“This report confirms the District of Columbia is hemorrhaging teachers of color and it has been for years,” she said.

Why does this matter? Some research has concluded that when black and Hispanic students are taught by teachers of the same ethnicity, their academic performance improved. At the same time, teachers are arguably one of the most influential role models students encounter outside of their own families. One study found that the teacher diversity gap was actually contributing to the high dropout rate among students of color.

But it’s not just the students of color who benefit from a more diverse teacher workforce, advocates argue.

“Diversity is a key component to equality and opportunity,” Weingarten said in a statement. “Where there’s a diverse teaching workforce, all kids thrive. That’s why we note with alarm the sharp decline in the population of black teachers in our cities.”

In some cases, the diversity drop was due to massive changes in the schools themselves. From the Washington Post’s coverage of the new report:

“It wasn’t until we did the study that I realized it was a fairly significant issue and that it’s true in virtually every city,” said Leo Casey, the executive director of the Shanker Institute. “We just had no idea the extent of it. What’s clear from this data is over the last 10 years or so with the recession, if you look at every one of these cities, there’s a loss of teachers — but African Americans are bearing a hugely disproportionate share of the loss.”

There was some good news in the report: Los Angeles Unified School District, the nation’s second-largest school system, was “a rare bright spot” of improvement in some elements of teacher workforce diversity. But there’s still a significant short of black and Asian male teachers, researchers concluded. From the L.A. School Report blog:

Having a largely female, white teacher workforce can be especially problematic for one subset of the student population: African-American boys. In a 2012 interview, I asked Shaun Harper, a University of Pennsylvania professor and the director of of the Center for the Study of Race and Equity in Education, about his research finding that many educators set low expectations for their black male students. Here’s what he told me about the implications of that bias:

“In teacher preparation programs, there typically is not space in the curriculum for aspiring teachers to confront their own biases and the way they’ve been socialized to think about groups different from their own. The overwhelming majority of public school teachers in K-12 are white women. I don’t know that teacher preparation programs are effectively teaching white women to teach black boys – or other populations. They are conditioned by the nightly news to see black males as either thugs or gang members, because that’s all they see. One argument I often make in my work is that it’s impossible to effectively educate a young black boy if one is afraid of him.”

(If you’re looking for anecdotal evidence that teachers are especially fearful of male students of color, consider 14-year-old Ahmed Mohamed of Houston, arrested after bringing a homemade clock to class.)

For the past few decades, the emphasis has been on recruiting minority teachers, said Richard Ingersoll, an education professor and researcher at the University of Pennsylvania. And while there’s been some progress in that area, teachers of color quit at a much higher rate than their white peers, Ingersoll said during a press conference on Wednesday.

“Why do minority teachers leave at higher rates? It boils down to this: The conditions of the schools,” Ingersoll said, noting that minority teachers often work in predominantly poor, predominantly urban, high-minority schools. (A powerful example of this tension: Lillian Mongeau’s piece for The Hechinger Report on one middle school principal’s struggle to keep her Oakland, California school staffed with teaching talent.)

“There’s a tragedy here, I think,” he said. “We will not close that gap until we focus on retention.”