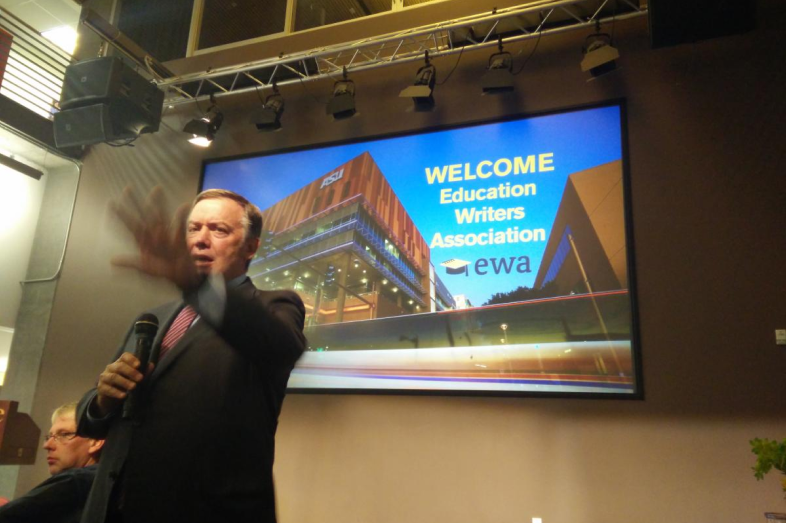 Hiring More Black and Latino Professors: ‘You Have to Want to Do That’

ASU President Michael Crow with his thoughts on faculty diversity.

Why aren’t there more black and Latino college professors at elite institutions?

According to one Ivy League scholar’s impressions, it’s because high-flying colleges simply don’t want more black professors. Writing for The Hechinger Report and again for The Washington Post, Marybeth Gasman, a professor at the University of Pennsylvania, argues that most top universities have recruitment practices and policies that effectively rule out many qualified professors of color.

Black and Latino students each make up about 6 percent of the population enrolled in doctoral programs, according to another article this month about hiring black professors. Those numbers are smaller for programs in the sciences. Colleges also are seeing many doctoral students of color drop out: In 2014, Inside Higher Ed reported on a study that found more than a third of black and Latino students in PhD programs quit after seven years.

Gasman considers several reasons why the nation’s renowned universities don’t hire more professors of color. She notes that Ivy League professors charged with recruiting new talent heavily rely on their own social circles, the implication being the largely white faculty rarely looks for talented candidates at colleges with less selective admissions criteria. She also dings top schools for overlooking the systemic barriers many young academics of color face – from lack of family resources to implicit bias among the institutional gatekeepers.

Do check out her essays in full; they’re frank and have the tone of exasperation, which make for compelling reads.

And she’s not alone in her analysis. This month, at an Education Writers Association conference, I asked Arizona State University President Michael Crow for his take on the relative dearth of black and Latino doctoral candidates in our nation’s colleges. “Everything has to be at scale or there’s no effect,” he said. “We need greater diversity in the faculty, we need greater diversity in the student body, and you have to want to do that.”

He cited ASU’s efforts to enroll more low-income students, noting the school’s percentage of students receiving Pell grants – federal aid typically reserved for families with incomes of around $40,000 – has risen from 3 percent in 1990 to 40 percent today. He also touted the school’s engineering program for its strides in forming a more diverse student body. Eight years ago he said ASU had 8,500 engineering students; today it has 20,000 (4,000 are online) and that the “diversity indexes are more than three times as high.”

“That’s how you affect the faculty pipeline – is by having a student pipeline. There’s really no other way to do it,” he said.

UPenn’s Gasman feels similarly: “This isn’t hard. The answers are right in front of us. We need the will,” she wrote.