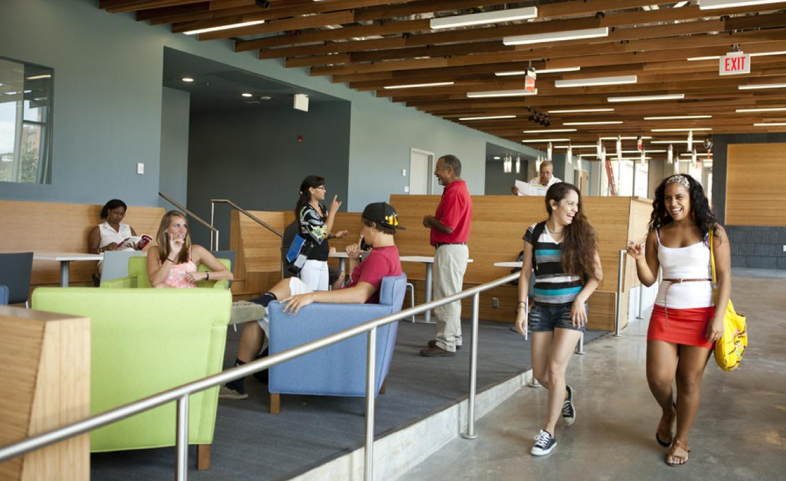 How a University Designed Its ‘DeafSpace’

The campus has a purposeful design called DeafSpace, a concept pioneered at Gallaudet over a decade ago, which includes sensory reach, space and proximity, mobility and proximity, light and color, and acoustics.

But once you begin to explore the Washington, D.C., campus, its differences become apparent.

A mini-museum welcomes visitors and explains the history of Gallaudet, the first U.S. institution of higher learning for deaf people (and, it’s claimed, the largest institution of its kind in the world).

The campus has a purposeful design called DeafSpace, a concept pioneered at Gallaudet over a decade ago, though it’s seen by the deaf community as a formalized extension of how deaf people have always redesigned and altered spaces made by hearing people. DeafSpace concepts include sensory reach, space and proximity, mobility and proximity, light and color, and acoustics.

In one building, for instance, a yellow-and-black strip of tape runs along the top edge of a long set of stairs. That’s because people speaking in sign walk and talk with their hands and eyes, so having a bright visual cue keeps them from accidentally tripping and falling.

American Sign Language, or ASL, is the language of choice at Gallaudet, so most rooms are surrounded with windows so people can see conversations. Desks and chairs are arranged in circles so everyone can see who’s signing during class discussions. There aren’t doorbells; instead, there are flashing lights (in the 1800’s, there was a large weight attached to a pulley that a visitor would lift then drop loudly to the floor, its vibrations alerting the visitor’s presence).

This idea — that spaces are designed to maximize comfort and communication — has evolved alongside a similar concept: learner-centered spaces. Research supports the idea that spacial design plays a big role in how people learn.

A 2014 study published in the Journal of Environmental Psychology found that rooms with large ceilings activate certain parts of the brain that deal with attention, whereas smaller rooms stimulate the emotional center of the brain, often eliciting a desire to leave the room.

In short, space matters — especially if the primary mode of communication is visual, like ASL. Just about everything at Gallaudet has been designed with DeafSpace in mind, said Keith Doane, the university’s innovation and entrepreneurship coordinator.

Speaking ASL through an interpreter, Doane guided a small group of journalists and others who visited Gallaudet in June as part of the Education Writers Association’s annual conference. The tour sought to highlight all the physical design and academic details that define Gallaudet. Its library, for example, houses what the university calls the world’s largest collection of deaf-related material — over 178,000 print volumes and access to thousands of media items and electronic books and databases. 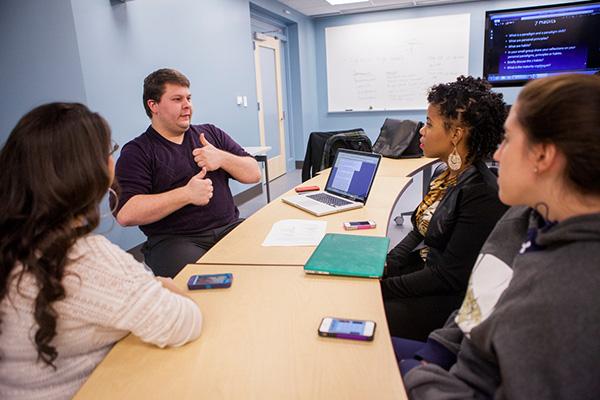 Gallaudet’s academic reputation stems from its original research, especially in a field called educational neuroscience. It’s a relatively new area of study that explores the various brain processes that take place during learning — from early childhood far into adulthood.

The campus tour ended with an intimate look at the Brain and Language Laboratory for Neuroimaging, run by Laura-Ann Pettito. She’s among a handful of researchers pioneering educational neuroscience, which is also known as “mind, brain, and education.” Here, deaf students work alongside Pettito and a small staff to explore language acquisition, reading and literacy, and bilingualism.

Pettito is known for work that challenges conventional ideas about speech and language. She has found that deaf infants who learn ASL “exhibit the same linguistic, semantic, and conceptual complexity, stage for stage,” as hearing infants.

Sign language is also considered to be more complex than spoken language, said Gallaudet student Max Graham-Putter, because it’s communicated in three dimensions. Various meanings can be layered and even tangents can be expressed by a simple repositioning of the body.

Pettito and her team, which includes the university’s first doctoral student in educational neuroscience, Adam Stone, are using what’s called functional Near Infrared Spectroscopy (fNIRS), a brain-imaging technology, to look at higher cognitive functions. Recently, the lab began using a Robot Avatar Thermal-Enhanced learning tool, or RAVE, to learn more about children who have little to no language exposure early in life – a problem that happens quite often, especially in developing countries.

It’s a little complicated,  but here’s how it works: the RAVE is essentially a virtual person on a screen that’s set next to a baby. The device figures out when the baby is most ready to learn, then it automatically begins signing nursery rhymes in a visual language.

In an announcement about the project, Pettito said the implications were far-reaching.

“If successful, the work will advance new understanding of how babies learn… and yield a transformative learning tool that benefits all children,” she wrote on Gallaudet’s website.