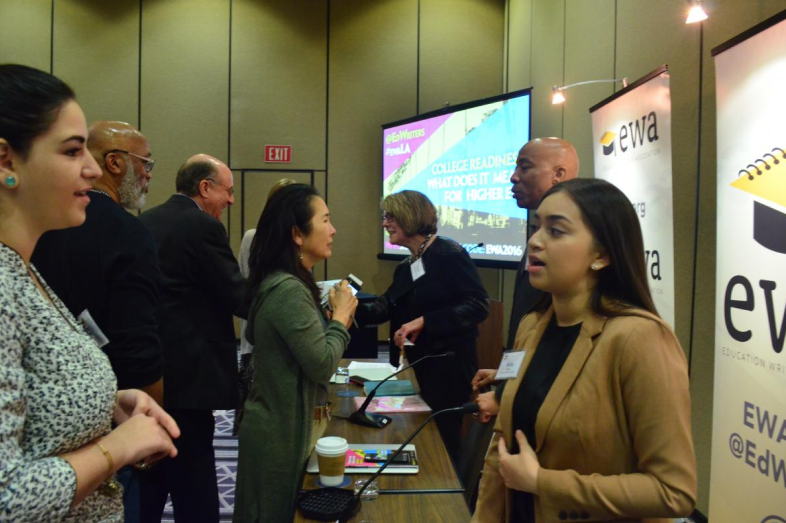 A few weeks ago Reina Olivas got on the phone with a freshman college student. “She was having a hard time with the cultural experience, the college experience,” said Olivas, a college mentor who’s in her third year at the University of Texas at Austin. “So I asked her this initial question – ‘Have you gone to office hours?’”

Olivas is part of an eight-person crew at the Dell Scholars Program that connects with 1,500 college students across the country who could use a helpful hint from other students who also are wending their way through higher learning.

“Well, how do you do that?” Olivas recalls the student asking. “It took me back to the place where I was my first semester – what are office hours, and why do I need to go?”

Olivas, who spoke about her experiences at a recent Education Writers Association seminar, knows about initially feeling unmoored in college. She’s the first member of her family to attend a postsecondary institution, making her one of the roughly one-third of students in higher education who are first-generation students. Unlike freshmen with parents, siblings or cousins who have gone to college, first-generation students are largely learning the pressures of staying above water during their first year in school without any experienced guidance from home.

These students often are unaware of what’s known as the “hidden curriculum” – the mix of bureaucratic know-how and sound study skills that can make or break a student’s first year in college. These students also are mostly from lower-income households who often work more than 20 hours a week to finance their education, in many cases at the expense of classwork. Around 90 percent of lower-income first-generation students don’t graduate within six years, far below the national average for college completion.

Researchers are learning much more about first-generation students these days, showing that a combination of simple nudges and regular check-ins from mentors can go a long way toward making such students feel confident that they can navigate the strange waters of college academics.

A 2011 study by Eric Bettinger of Stanford University that looked at more than 13,000 college-student records found that students who took part in mentoring and coaching services were 10 to 15 percent more likely to advance to another year of college. The study also detected a four percentage-point increase in the graduation rates of coached students compared with students who weren’t coached. The students who received mentoring were picked by a kind of lottery, suggesting that coaching alone was responsible for the bump in retention.

Olivas leaned heavily on mentors herself. During her first year at UT-Austin her father went to jail. Tests were approaching. She wanted to go back home in Houston, where she worked while in high school to pitch in financially for her mom and siblings. So she reached out to a Dell Ambassador, which is her current role. They first talked by phone, then met in person. “What that provided me was just – I’m not alone, I’m not the only one that’s going though these issues.”

Some demographic groups are more likely to be first-generation students than others. According to 2012 U.S. Department of Education data, while about a quarter of white and Asian-American students are the first in their families to enroll at a college or university, the same is true for 41 percent of black students and 61 percent of Hispanics.

And though the needs of first-generation students and of black and Latino college-goers don’t totally overlap, their challenges are similar – and similarly misunderstood.

“Inequity in higher education is one of our enduring characteristics,” said Estela Bensimon, a professor of higher education policy at the University of Southern California. “Despite all kinds of programs, civil rights legislation, we haven’t been able to beat it. And we are aware that we have inequities, but often we think of them as inevitable. Just like an earthquake.”

Bensimon has made a practice of visiting universities and community colleges across the country to consult with their deans and provosts about how to improve the completion rates of their black, Native American and Latino students. She uses what she calls an equity scorecard that crunches the student enrollment and faculty data by race and guides school leaders as they make concrete plans to change their hiring practices and coursework design – changes that Bensimon says are integral to improving the academic performance of traditionally underserved students.

At the Community College of Aurora in Colorado, Bensimon partnered with the mathematics chair to help the school meet a state goal of increasing the number of Latinos who have earned postsecondary degrees and certificates. Bensimon says the approach showed that the math chair had not hired a black math faculty member in a decade; she argues that a diverse faculty is important. “Faculty are the majority of the budget at institutions of higher education, faculty are the ones that create the culture of institutions mostly, and they are the ones that through their practices, create or don’t create success for the students,” she said.

Among the adjustments the equity approach prompted at the college was an overhaul of how the college hires new faculty. The college also began monitoring how well students of various racial backgrounds perform in select classrooms and using that data to coach the instructors on how to improve the academic lot of their non-white students. Early signs show that the achievement gap between white, black and Latino students is almost closed at Aurora, Bensimon said.

California State University Dominguez Hills, a state university near Los Angeles with a large population of first-generation students that has partnered with Bensimon before, has in the past three years lifted its graduation rate for full-time students from around 29 percent to what’s expected to be 40 percent at the end of this year.

The university’s vice president of student affairs, William Franklin, said the academic improvement can be attributed to a major rethinking of how the campus serves its students. A few years ago, the university introduced a summer bridge program for incoming freshmen whose test scores suggested they could use a tune up in math and English. The two-month summer session is free for those who qualify, reviews some of the “hidden curriculum” concepts, introduces the campus’s many useful facilities, and helps to forge important relationships with peers and mentors. The university also spent nearly two years revising its student-mentoring program, creating a data tracker that monitors student performance and allows advisers to recommend more relevant coursework and support.

A change in culture matters, too, Franklin said. Because most of the university’s students are either low-income, black or Hispanic, it’s tempting to “problematize [the] students, their communities, their families,” said Franklin. “’Oh, they didn’t make it, well let’s just mystify it and bring in a larger class next time and continue doing the same thing we’ve done, and getting the same results.”

In his view, more campus leaders should be asking, “Is the university ready for the student?”

As Cal State Dominguez Hills continues to fine-tune its mentoring and academic systems, more students are completing their first and second years of college. In 2008, before these reforms took place, the university lost 53 percent of its students who started school in 2006. Since 2010, the first-year retention levels have risen from 78 percent to nearly 82 percent.

The university is also sharing what it has learned through a 44-university coalition called Re-Imagining the First Year, with funding from the Bill & Melinda Gates Foundation and USA Funds. Dominguez Hills earned plaudits for its efforts to graduate more students on time, receiving a competitive $3 million innovation award from the state in 2015. And the school has partnered with a Stanford University initiative to focus more on students’ psychological well-being and confidence.

Beyond rolling out the right programs, how a campus reaches out to students can make a difference. Emails are fine, but colleges shouldn’t overlook social media. “Just adapt to what we as students are experiencing or what we’re using,” said Olivas. “We’re on our laptops to do our homework, but we’re on mobile phones, we’re a very mobile student body.”