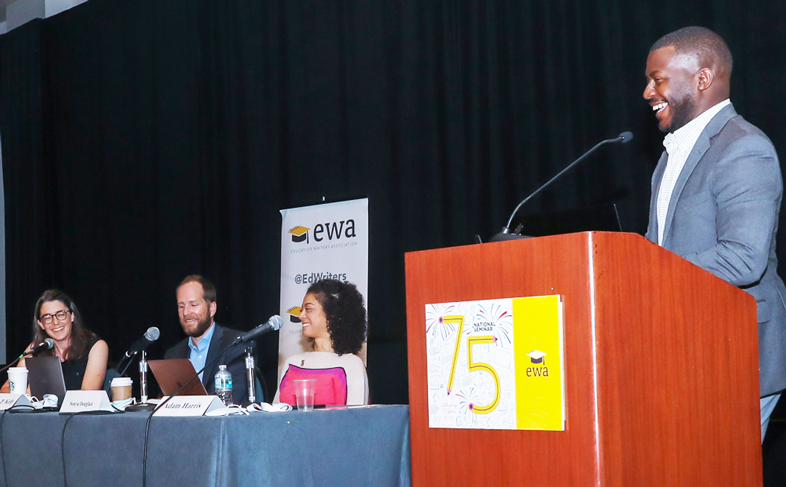 Investigating How Politics Is Affecting Education? Here’s What to Know

Amid an ‘all-time high’ in partisan polarization in the U.S., get background and tips to better cover the politicization of education and how it affects students.

Political influence over what students are learning in the classroom has been at the forefront in recent years, but its impact goes back decades.

Educators are dealing with fatigue related to the ongoing COVID-19 pandemic and political stress, including accusations of teaching critical race theory to school children, researchers said.

Critical race theory is a graduate-level academic framework, often taught in law schools. Some conservative groups and activists use the term as a catch-all phrase for teaching about race and racism history in K-12 classrooms and other issues. Due to confusion about what it means, CRT is often conflated with “anti-racism,” “social justice,” and all diversity and inclusion programs.

“Public schooling is always political. It’s shaped by politics,” said Andrew Kelly, the senior vice president for strategy and policy at the University of North Carolina System Office. There also has typically been a divide among Democrats and Republicans when it comes to colleges and universities, he added.

Kelly, along with two other panelists, spoke at the “Politicization of Education: What’s Ahead in 2022” opening session, moderated by The Atlantic’s Adam Harris.

A recent study showed 48% of principals and 40% of teachers feel politics impact their job, said Heather Schwartz, director of the Pre-K to 12 educational systems program at the Rand Corporation, a research-focused, nonprofit think tank.

“The point here is that at least the perception of the intrusion in politics [is] much, much more common as a source of stress in schools than outside of schools,” Schwartz said.

The survey also showed principals and teachers working at predominantly white suburban schools were more likely to report the intrusion of political issues and opinions as a source of stress, she said.

This doesn’t mean urban districts with high numbers of students of color are not experiencing similar issues, Schwartz said. Twenty-seven percent of leaders at large urban districts also reported that accusations of teaching critical race theory were affecting the district.

Report on How Past Affects Present

U.S. Supreme Court rulings, including Plessy v. Ferguson in 1896 and Brown v. the Board of Education of Topeka in 1954, are good examples of how politics can impact education, said Sonya Douglass, a professor of education leadership at Columbia University’s Teachers College.

Brown is typically upheld as an example of “America’s commitment to educational equality,” Douglass said. Some view the ruling as showing how progressive the country was at the time.

She points out that critical race theory has people question “motivations and the political moment that led to the passage of that unanimous decision” in Brown.

“If you use that lens to look at the decision, it changes the way we think about whether or not it was really effective in improving educational outcomes,” Douglass said.

Investigate Locally How Politics Is Affecting K-12 and Higher Ed

Often, the push for change within schools can be traced to which political groups are in power.

“When one person sees politicization, other people see governance of a public service by elected representatives,” Kelly said, “And then when the power flips, sometimes, the perceptions flip the other way. Where if your party is no longer in power, you see it as being politicized as opposed to being governed.”

This is not only limited to elected officials.

“We see that unfolding over the last year and a half right in terms of parents literally going to their schools, to say that ‘We do not want critical race theory to be taught in our schools,’” Douglass said.

Higher education is not immune to the impact of politics.

According to Kelly, a survey of eight colleges within the University of North Carolina System showed “sizable proportions of students have concerns about stating their sincere political beliefs.” The report – originally published in May 2022 – was last updated Aug. 21, 2022.

“Self-identified conservatives express concerns about expressing their sincere political views at much higher rates than the self-described liberals,” he said.

For reporters investigating locally how partisan politics is affecting what students learn, start with school boards and other organized groups with influence:

Share
Author
Samantha Hernandez
of the Des Moines Register for EWA
Related Skills
Investigating the Pandemic’s Effects on America’s Youngest Learners
How an EWA Reporting Fellowship helped me (Alia Wong) better understand whether and how COVID’s unpredictability, stress and isolation undermined kids’ development
How to Cover Indigenous Students Authentically and Accurately
Native reporters and educators provide tips for covering Indigenous students amid critical race theory claims, renewed efforts to teach Native history, and some state rollouts of reduced or free colle
The Student Mental Health Crisis: Resources for Reporters
Featuring recent interviews with education journalists and experts who discussed the nation’s student mental health crisis at EWA’s 2022 National Seminar, this report helps reporters better cover
A Tale of Two Math Terms: An Infographic Story About When to Use Percent Change vs. Percentage-Point Change
Meanville, USA, was an average American town. Until one day, a local journalist had to figure the best way to explain how town administrators planned to spend a sudden windfall ...
Percent Change Versus Percentage-Point Change: What’s the Difference? 4 Tips for Avoiding Math Errors
Many people get 'percent change' and 'percentage-point change' confused. Use this tip sheet, featuring insights from data journalism pioneer Jennifer LaFleur, to get it right.
Load More
x