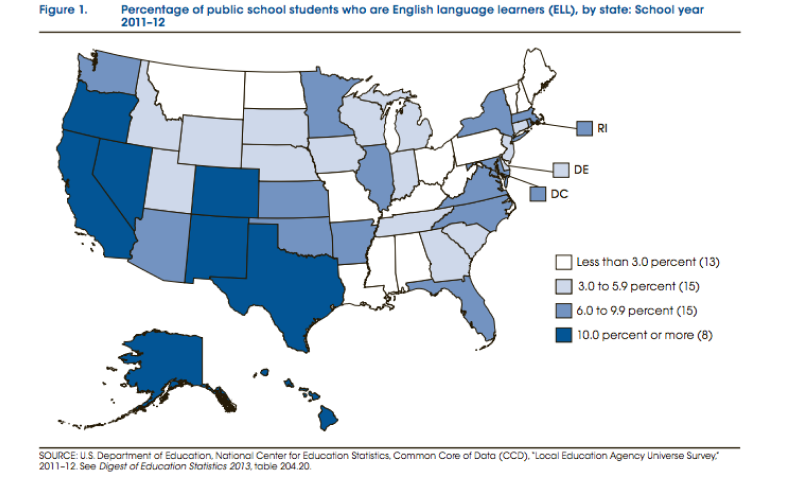 This month, the Los Angeles Times wrote about California’s status as the first state in the country to create a program aimed at improving the English fluency skills of long-term English-language learners.

Being born in the United States does not guarantee proficiency in English. Maybe you knew this, maybe you didn’t. But it was new to me. Here’s what I learned.

This month, the Los Angeles Times wrote about California’s status as the first state in the country to create a program aimed at improving the English fluency skills of long-term English-language learners. What caught my eye was the opening anecdote. “I should be more confident in English because I was born here, but I’m embarrassed that I haven’t improved myself,” said Dasha, a junior at a Los Angeles high school.

Is Dasha a rare native-born American student who struggles with English even as she progresses to the upper grades or is she part of a larger community, a notable subset within the ELL student population?

Definitively, it’s the latter. The overall percentage for 6-to-21-year-olds enrolled in a K-12 program who were born outside of the United States is 4.7 percent, or 2.37 million students, according research the Migration Policy Institute’s Jeanne Batalova calculated for EWA using 2012 U.S. Census data. But the percentage of U.S. students who are deemed English-language learners is nearly double that at 9.1 percent, or 4.4 million students, according to 2013 U.S. Department of Education Data. While the two figures come from different data sources — the latter includes only students in public schools — it’s clear that a large percentage of English-language learners were born in the U.S.

This gulf between the number of students born abroad and those considered English-language learners is particularly wide in several states. California, with roughly 93 percent of its child population considered native-born in 2012, had nearly a quarter of its students enrolled in programs for English language learners that same year. 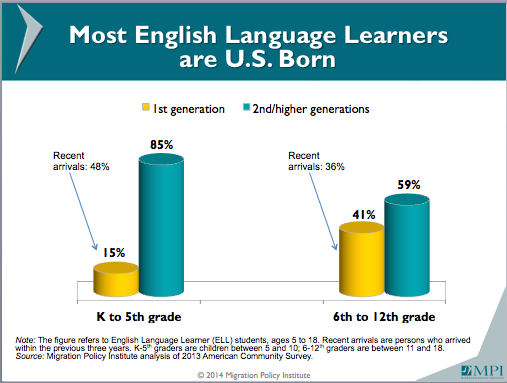 Eleven percent of Oregon’s students are English-language learners while just 4 percent of children in that state were born abroad.

Texas and Nevada have ELL student populations of 15 and 20 percent, respectively. The non-native child population in each state is around 6 percent.

(Data geeks should take heed: The U.S. Census and the Education Department measure English-language proficiency differently. Census data rely on the self-assessments of whoever in the home fills out the decennial forms, which may lead to an inflated or deflated sense of English proficiency. The Education Department collects its data from state information that includes the number of students whose test results show they are in need of ELL programming.)

The observation that ELL students outnumber foreign-born pupils isn’t particularly new, though. In 2007, the Migration Policy Institute estimated that a little more than half of adolescent ELL students were born in the United States. Among those born in the United States, the institute calculated that “up to 27 percent of all [ELL] adolescents are members of the second generation, and 30 percent are third generation, meaning that many students educated exclusively in U.S. schools still cannot speak English well.”

The composition of English-language learners also depends notably on the students’ grade level. Nearly nine in 10 ELL students between kindergarten and grade five were born in the United States. That figure drops to about 60 percent among students grades six to 12 who were enrolled in ELL programming. These figures come from a Migration Policy Institute analysis using 2013 U.S. Census data.

“Coming from families who are limited-English proficient affects the trajectory, both the academic and English-language acquisition, of children born into these families,” said Batalova in a phone interview. “We also know that children from immigrant families are less likely to enroll in early childhood education programs, which often helps them to prepare to learn.”

“The disadvantages are cumulative,” she said. The gap between abilities and skills for students who lack language proficiency can seem narrow in earlier grades. “But when the academics become more complicated and complex, children are lagging more and more behind,” Batalova said. “Disadvantages have an unfortunate cumulative nature,” she added.

Nationally, nearly 41 million people in the United States age 5 and above are considered foreign-born, according to 2012 Census data, a figure that’s grown three-fold-fold since 1980. Of those 41 million, roughly half either speak only English at home or speak English “very well.”

Another factor that appears to affect English language acquisition include the state in which an immigrant family settles. States in the Midwest and Southeast “to some degree were caught off guard at the rapid rise of the immigrant population,” Batalova said, because they largely didn’t have in place the academic infrastructure necessary to improve the language skills of sizable groups of these incoming students. In many cases, language teachers either weren’t familiar with the cultures that shape the new students or weren’t proficient in the languages that these children spoke at home. A recent story by reporter Jennifer Johnson of the Grand Forks Herald demonstrates the challenges schools face in educating students from Nepal.

Between 2001 and 2012, 10 states experienced colossal growth in the number of students enrolled in English-language learning programs, ranging from 135 percent in North Carolina to 610 percent in South Carolina, according to Sonya Douglass Horsford of George Mason University in Virginia and Carrie Sampson of the University of Nevada, Las Vegas. Alabama, Arkansas, Delaware, Kansas and Virginia also are on the list of states that have seen steep growth.