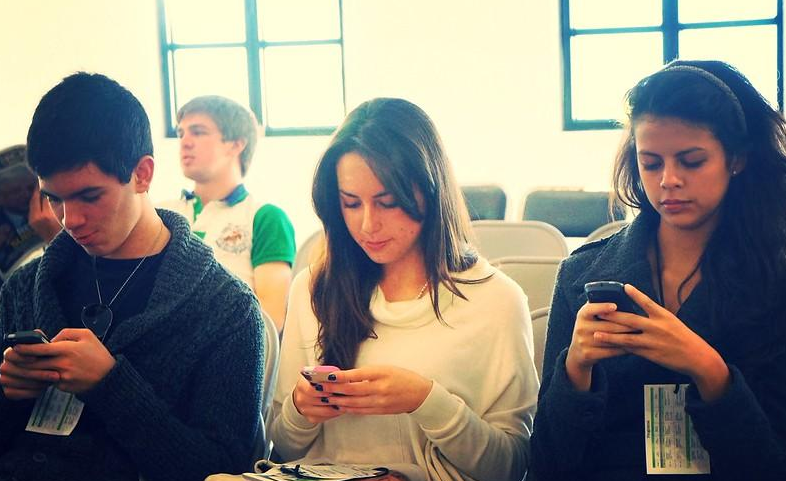 It’s About Context, Not Time: What the Latest Research Says on Teens & Screens

Sexting is (gulp) normal and other findings to consider in news coverage.

Yes, today’s teens are surrounded by screens. No, it’s not as bad for them as you might think.

That was the upshot of a discussion on screen time at a recent Education Writers Association seminar.

Experts and reporters discussed how ubiquitous social media and device use is impacting the way adolescents learn, communicate, and entertain themselves. The panel, “Behind the Screens: Risks and Rewards of Teen Tech Use,” delved into some hot topics, including sexting, device addiction, anxiety, and depression. Or, as the moderator Ki Sung of KQED public media described it, “every parent’s nightmare session.”

But drawing on their own research, data, and reporting work with adolescents, panelists pulled the curtain back on the screen time boogeyman. Journalists received expert guidance on how to determine if an academic study is up to snuff, why measuring the amount of time on screens doesn’t tell the whole story, and when to be genuinely concerned about the impact of technology on teen mental health.

For a more grounded approach to reporting on the digital lives of adolescents — an age group that scientists now consider to span the range of individuals ages 10 to 25 — speakers offered the following takeaways for reporters:

Drastically increased access to technology such as smartphones and laptops, combined with widespread social media engagement, are relatively new phenomenons shaping our everyday lives. Because of this, nearly all of the research done on screen time’s effects has been conducted after 2006. A common starting point in early studies was to attempt to measure the negative impacts of total online time on an individual’s mental and physical health. But as the field has developed, most experts now agree that time does not equal risk, especially as our online and offline lives have become more fluid.

Screen time as a research variable “misses the mark,” said speaker Sarah Domoff, a professor of clinical psychology at Central Michigan University. Domoff explained that what teens are doing online is just as important, if not more important, than the amount of time they spend online. To illustrate this point, Domoff compared a youth who spends three hours on social media connecting to friends or others who help them solve problems, versus another youth that spends three hours on social media passively scrolling, trolling, or engaging in social comparisons.

“You can’t use hours as the determinant of what’s good or bad about screens,” said Domoff.

Domoff shared her criteria for determining when technology use may be problematic: “What’s really critical is to understand whether or not a child’s digital media use is interfering with their functioning, specifically academic functioning, physical, and mental health.”

For example, are they staying up too late, refusing to go to school, or exhibiting troubling changes in behavior such as avoiding activities they previously enjoyed?

Domoff and other panelists offered the following tips for journalists when presented with research studies on screen time and adolescent well-being:

Also, it’s always a good idea to consult an independent expert besides the study author, for some outside perspective.

Education reporter and panelist Jenny Brundin shared insights from her seven-month reporting project at Colorado Public Radio. For the series, “Teens Under Stress,” she interviewed and followed teens in their daily lives. One element focused exclusively on the feelings teens expressed about their time spent online.

“The more you interview them, a lot comes out about their conflicted relationships with their phones,” said Brundin. For example, Brundin learned that while teens love how their phone connects them to each other and the world (and to memes), they also feel overwhelmed by the onslaught of bad news. Some youths she spoke with ended up deleting apps like Snapchat or turning off notifications.

But others, like José, a teen featured in her series, shared ways their phone use was troubling. Brundin played a clip from an audio diary José produced as part of her project: “I guess I used Facebook a lot just cause I wasn’t feelin’ today,” José said. “And by that I mean, I didn’t feel good today. So I … just hopped on social media to kind of block everything else out.”

Brundin encouraged journalists to frame a narrative of teen life that considers the various issues on the minds of young people, such as climate change, going to college, and standardized testing. Also, explore the tensions and complex emotions teens express about their use of technology and social media.

Are Concerns About Teen Sexting Overblown?

As awkward as it is to talk and think about teen sexting — electronically sending a sexually explicit image, video or message — the reality is that teens engage in the activity. And sexting is nothing to worry about, said panelist Jeff Temple, the director of the Center for Violence Prevention at the University of Texas Medical Branch in Galveston, Texas.

Temple, who studies adolescent behaviors such as sexting, dating violence, and cyberbullying, addressed what he considers four myths about teen sexting:

Takeaways and Story Ideas for Journalists

The one constant with technology is rapid change. Apps rise and fall, new platforms emerge. And research on the impact of these experiences struggles to keep up.

Emphasizing the vital role journalists play in communicating how technology use impacts everyday teen life and well-being, Domoff said, “[The public] will turn to your articles … to get information because the science cannot keep up as quickly as some of these changes.”

Panelists left reporters with a handful of fresh story ideas:

The biggest takeaway? Talk to teens. And listen to what they have to say.