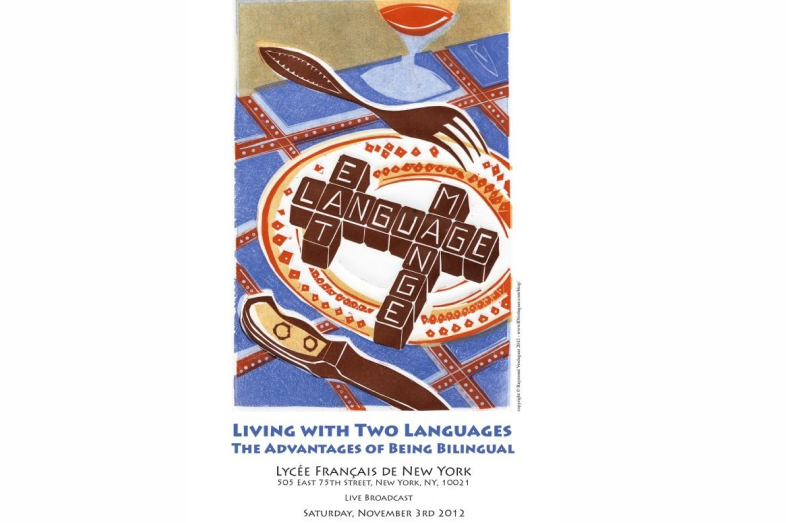 Living with Two Languages: The Advantages of Being Bilingual

What’s the best age to start and master a new language? Are bilingual students smarter? Does knowing two languages offer advantages in learning how to read, write and do math? Does being bilingual have an impact on our personal and emotional development? These themes, and many more, will be addressed during the daylong conference, Living with Two Languages: the Advantages of Being Bilingual, at the Lycée Français de New York on Saturday, November 3. Experts from the United States, France and Canada, including renowned researchers, Ofelia Garcia and Ellen Bialystok, author Karen Le Billon, and chef Eric Ripert, will explore bilingualism from the perspectives of education, sociology, psychology and gastronomy.

The conference will also be live-streamed from the event website: http://living-with-two- languages.info

“At the French Embassy, we believe in the transformative power of bilingualism. Being bilingual can make you a math genius! The programs we support have shown that learning different languages at an early age enhances your potential for abstraction and problem solving,” said Antonin Baudry, Cultural Counselor of the French Embassy. “Learning another language isn’t only about words, it’s about experiencing a new world view and a new creative way of thinking.”

“Living with Two Languages is intended for everone interested in bilingualism: parents, educators, students and journalists.”

Vannina Boussouf, Director of Primary, and two teachers from the Lycée’s primary program will share the experience of the Lycée Français de New York which welcomes students from over 40 different nationalities.

During the second panel, “Language, Emotions and the Bilingual Brain,” educators and researchers, including Ellen Bialystok, an expert in cognitive psychology from York University in Toronto, Canada, will discuss the connections among bilingualism, emotional intelligence and brain development. Dr. Bialystok’s research shows how in the bilingual brain the early development of some cognitive functions helps bilinguals manage multiple tasks more easily. “Ellen Bialystok is a pioneer in bilingualism,” said Sylvie Ozon, a science teacher at the Lycée Français and the moderator of the session. “She has been working on bilingualism for nearly 40 years and uses many methods, ranging from psychology to behavioral sciences and modern imagery, to support and deepen her research.”

The third panel, “Manger Bilingue (Eating Bilingually),” takes a unique look at bilingualism from a culinary perspective, with Eric Ripert, chef of the four-star restaurant Le Bernardin in New York, along with Karen Le Billon, author of the best-selling book, French Kids Eat Everything. In her book, the professor, who has lived in France, explains why French children are more likely to try everything. The panel offers insights into how being open to a wide range of foods at an early age helps children to keep an open perspective throughout their lives.

“Living, thinking and even eating bilingually, especially in the young, is a multiplier for opportunity. It helps in being open to others, strengthening one’s emotional life and also provides a key tool for helping to better understand the world,” said Fabrice Jaumont, and co-organizer of the conference.

“As a parent of two children educated in a bilingual school, I have been particularly interested in understanding the influence of a bilingual educational environment on students,” said Pascale Richard, Director of Cultural Events and co-organizer of the conference. “We are excited to explore with these panelists best practices in bilingual education as well as the impact of bilingualism on cognitive development and general culture.”

Living with Two Languages: the Advantages of Being Bilingual takes place on Saturday, November 3rd from 9am to 4pm at the Lycée Français de New York, 505 East 75th Street, New York, NY 10021.

For more information and to register for the conference, please visit: living-with-two- languages.info. The event will also be live-streamed from the site.

Living with Two Languages: the Advantages of Being Bilingual Special conference on bilingualism to take place on Saturday, November 3, 2012, at the Lycée Français de New York