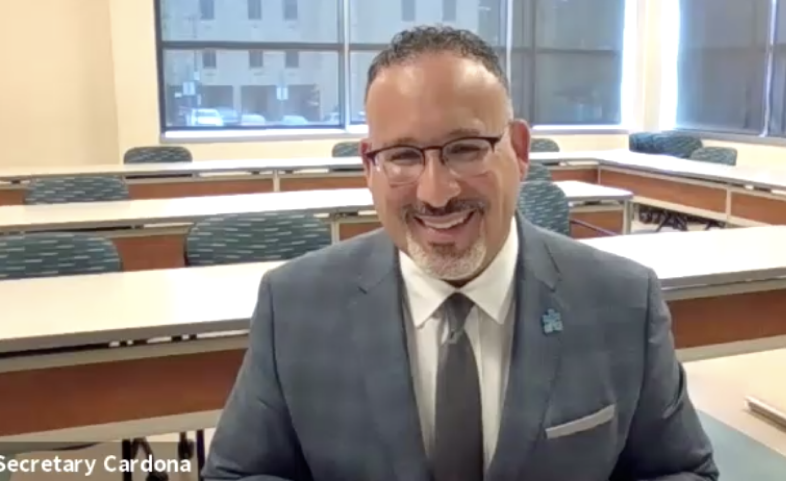 Miguel Cardona: Why Schools Should Reopen Fully and Train Their Police Officers Better

What education reporters can expect from the Biden administration.

Moreover, Cardona said, there is a role for increased federal oversight for school districts that fail to reopen for in-person learning.

Cardona was interviewed by Sarah Carr, an EWA board member and independent journalist, and also answered questions from the virtual audience.

“Yes,” he said, when asked whether the Education Department may need to increase oversight. “While it’s not the federal government’s role to micromanage education, it is our role to make sure that all children across the country are getting a free and appropriate public education —  one where they have the opportunity to succeed in life.”

“I take that very seriously,” said Cardona, who was the education commissioner in Connecticut before being tapped by President Biden to lead the federal agency. “It’s going to be my role and my agency’s role to support states on that but also call out where issues are happening.”

His remarks come as concerns mount over school districts that have been slow to return all students to classrooms, despite roughly $140 billion in federal stimulus aid flowing to K-12 schools from the most recent coronavirus relief package to help them reopen.

Nearly 80% of students are enrolled in schools that offer some type of in-person learning. This includes full-time instruction for all students or only certain groups, such as at-risk youth or those with disabilities. Additionally, some schools are operating on a hybrid model, which includes in-person and online learning.

According to the most recent federal data, 60% of fourth-grade and 69% of eighth-grade students were still enrolled in remote learning either full time or in a hybrid model — a status that disproportionately affects students of color and low-income students in urban districts.

In his remarks, Cardona emphasized his expectation that schools not simply reopen, but reopen in ways that rethink how to best serve students, especially low-income students and students of color.

Don’t Go Back to ‘Comfort Zone’

“My biggest fear is that we go back to practices that were comfortable before the pandemic, but led to the disparities and outcomes that we are experiencing as a country,” he said. “I don’t want us to go back to that comfort zone.”

As for annual state assessments — the issue on which he’s taken the most heat so far for refusing to relieve states from their federal mandate to test students every year — the secretary clarified those assessments will help ensure that federal relief ends up with the students that need it the most.

“I don’t think there’s a teacher across the country that needs a standardized test to tell them how the children in front of them are doing,” he said. “Yet, we have to make decisions about how to move forward based on the data that we are receiving from states on the conditions of where they are, where their students are.”

He added: “We are making very serious decisions about how to move billions of dollars, so every little piece of data helps.”

The discussion was light on the bookends of K-12 — early education and higher education (see some tidbits below on canceling student loan debt and making college free) — but Cardona gave education reporters across the country insight on where the school reopening debate moves next.

As an added bonus, Secretary Cardona also promised to be as transparent as possible in the months and years ahead.