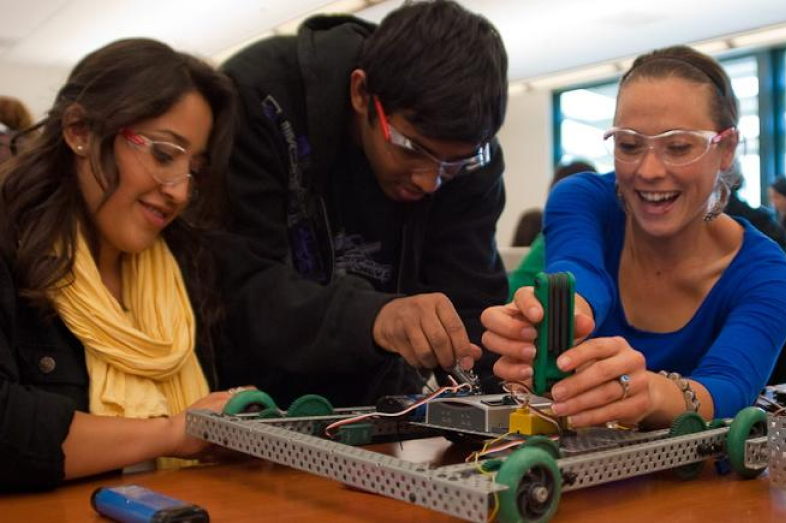 New Ways to Find Out Who Is Ready for College

Do tests or high school grades better determine whether a student is ready for college-level math and reading? For public universities and community colleges, increasingly the answer is both – or no tests at all, reporters learned during a seminar hosted by the Education Writers Association in Los Angeles last month.

Several states have undertaken a series of changes that allow students to prove they’re prepared for college courses by showcasing the work they’ve done in high school, such as grade point averages and scores on statewide standardized assessments they already take during high school. That’s a shift away from the current standard many colleges use – requiring incoming students to take placement tests to determine whether they need to be enrolled in developmental math or English.

This pivot away from relying on college placement tests is significant because a growing body of research suggests students are less likely to complete their degrees if colleges enroll them in even one developmental, or remedial, class. Nationally, 42 percent of incoming college students are referred to remedial courses; the percentages are even higher for black, Latino, poor and community college students. Just one-tenth of students who start college in remedial courses ever earn a degree a report by Complete College America calculated in 2014. “It’s a high school class for which you will pay college prices,” Acting U.S. Secretary of Education John King recently said at a gathering of mayors in Washington, D.C. “We know that students taking those remedial classes are dramatically less likely to finish.”

One explanation for the low success rate for these students is that developmental courses cost money but don’t count toward degree requirements. The remedial sequence can also be time-consuming: Community colleges often expect students to pass multiple remedial courses in succession before they’re able to enroll in their first credit-bearing class, leading to hundreds of thousands of students giving up on the process altogether each year. Roughly 1.7 million students each year require remediation, according to Complete College America, a nonprofit organization that advocates for the elimination of developmental courses.

States are rethinking the remediation maze in numerous ways, particularly for students who recently earned a high school diploma. More than 220 colleges in eight states are now using high school students’ scores on the Smarter Balanced assessment – one of the tests said to be aligned with the Common Core standards – as one measure of whether they need remedial coursework. Virtually all of California’s community colleges and the California State University system have signed on to this model of determining student readiness.

North Carolina’s community college system in 2013 passed rules that allow incoming students with at least a 2.6 high school GPA and a minimum number of high school courses to completely bypass the placement exam. A recent report noted that students in North Carolina who took advantage of the placement-test workaround were more likely to pass their first credit-bearing math or English courses than students who sat for placement tests.

“I think [four-year] colleges and two-year colleges around the country are moving toward what folks refer to as a ‘multiple measures approach.’ We’re moving away from a one-size-fits-all … test for our placement,” said Bill Moore, director of K-12 partnerships at the State Board for Community and Technical Colleges in Washington state.

Nearly 50 colleges and universities in the Evergreen State have agreed to enroll students in credit-bearing math and English courses if they received a 3 or 4 on the Smarter Balanced tests in high school – the two highest scores possible. At the EWA event, Moore said that actually he’s even more encouraged by the state’s set of rules for high school students who just miss the college-ready score on Smarter Balanced. Because the Common-Core aligned assessment is issued in 11th grade, students who earn a 2 are able to enroll in “Bridge to College” courses their senior year of high school to forego taking the remedial exam at the state’s 34 community and technical colleges. The bridge classes are offered at 114 high schools across the state.

There are limitations to which credit-bearing college courses high school graduates can sign up for just by performing well enough on the Common Core-aligned assessment. Higher-level math for degrees in science or medicine may require additional tests, but for students who don’t need a class like calculus, their Smarter Balanced scores are sufficient to put them on the right path to satisfying a graduation requirement.

While these ideas show promise, most colleges for now are sticking with placement tests. A recent survey determined that close to 90 percent of community college students were asked to take a placement test before they could register for classes.

Some higher-education experts have pointed out that community colleges effectively penalize students for mediocre grades in high school when many selective four-year colleges do not. A 2014 study that compared the two groups of students with similar grades and test scores in high school found that the community college students were 19 percent more likely to take remedial math courses. Another study predicted that if colleges assigned all students to college-level math courses, the percentage of students passing such math courses would increase by 33 percentage points. The same study found that between a quarter and a third of college students are severely misplaced in their math and reading placements, with the grand majority of those students being needlessly enrolled in developmental courses.

Pamela Burdman, a researcher who also spoke at the EWA seminar, said she calculated that up to 50,000 students in California community colleges are unnecessarily enrolled in remedial math. “The biggest problem is not that students don’t succeed in the courses, the problem is that they don’t persist though the sequence,” said Burdman. “We always thought of admission tests as being high-stakes tests. Now we realize that placement tests are high-stakes tests. How students are placed can diminish their chances of completing a college-level course.”

Another reform that’s showing promising signs in getting more students to credit-bearing courses is the practice of assigning students who might need some remediation to college-level courses with extra support, an effort known as co-requisite instruction. “You’re receiving either additional tutoring or you’re taking two extra classes a week that are geared towards helping you get up to speed,” said Blake Johnson, who’s head of communications at Complete College America, which in January released a report highlighting the benefits of this model. They evaluated four states that introduced the co-requisite approach in math and five in English, calculating that students who successfully passed their first college-level course in either subject jumped from around 20 percent to more than 60 percent.

The report also includes a table that tallies the number of remedial students in nearly 30 states, and offers a prediction of how many more might graduate if they were enrolled in a co-requisite course.

“I think there’s just a limit to how much a test can tell you about somebody,” said Burdman. “This student is spending an hour or two on the test, and you’re trying to understand how they’re going to do over the course of the semester or a year in college. Tests are just limited.”