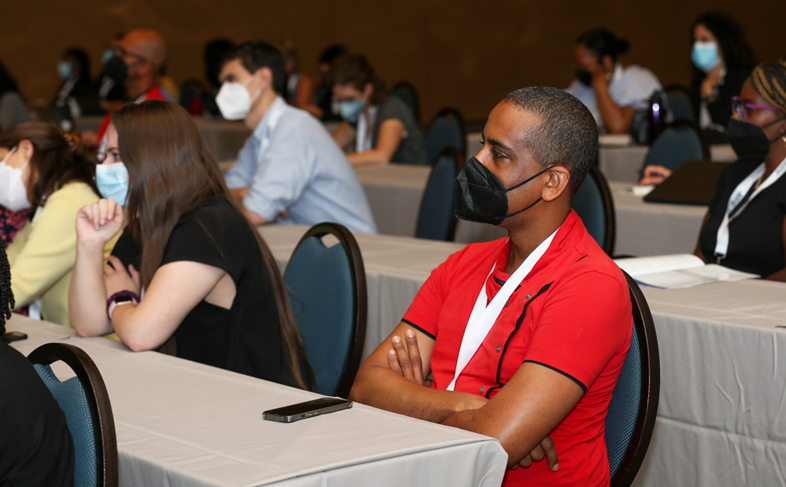 Reporting on the Student Loan Debt Crisis? Here Are Insights From Experts

Experts tackle questions of fairness and the future of student loans and forgiveness.

A few weeks before President Joe Biden announced that borrowers who earn less than $125,000 could get up to $20,000 of student loans forgiven, experts at the Education Writers Association’s 2022 National Seminar discussed the fairness of forgiveness and the complexity of the student debt crisis in America.

According to the most recent data from the U.S. Department of Education, more than 44 million people across the country collectively owe more than $1.76 trillion, making federal student debt a paramount topic in higher education coverage.

Sandy Baum, a senior fellow at the Urban Institute and professor emerita of economics at Skidmore College; Wil Del Pilar, vice president of higher education at the Education Trust; and Betsy Mayotte, president and founder of the Institute for Student Loan Advisors, shared their thoughts on loan forgiveness and possible solutions. NPR’s Cory Turner served as moderator.

Here are some key takeaways from the July 25 panel on student loans:

Policymakers often imagine the typical borrower as a 22-year-old college graduate, but that’s often not the case, Mayotte said. Half of all student loan borrowers are older than 30, and nearly a quarter are older than 45, having taken out loans years ago.

More than a million borrowers owe less than $10,000, but many didn’t complete college, meaning they have debt but no degree, she added. For some, that may mean they are unable to afford their $50 monthly payment, she said.

“We need to make it easier to forgive people who are our most vulnerable borrowers,” she said.

“Broad debt forgiveness is inequitable and will not solve the problem,” Baum said. She questioned the viability of a system where after forgiveness people continue to borrow, continuing the cycle.

Baum stressed that loans improve access to educational opportunities for many people. Debt reduction for parents who were loaned money by the government when they lived below the poverty line is necessary, she said. But Baum questioned the fairness of a broad forgiveness plan that gives student loan borrowers a chunk of money, say $10,000, and leaves out people who may need the money but do not have student loans.

Del Pilar noted the hypocrisy of a government that bails out airlines and banks but not students and said that with $10,000 forgiveness, a third of borrowers would have no debt.

Because of systemic racism, inequitable distribution of wealth and rising college costs, Black borrowers are among the most negatively impacted by the student debt crisis, he added.

“Black students are more likely to borrow, borrow more and more likely to struggle with repayment than their peers because they collectively have fewer resources due to the generational and ongoing effects of structural racism,” he said.

Del Pilar referenced research that found nearly half of Black borrowers who took out loans in the 2003-2004 academic year defaulted on at least one student loan within 12 years.

What Is a Meaningful Alternative to Forgiveness?

All panelists agreed that something must be done about the rising costs of college, which has ballooned for public four-year institutions in recent years.

They suggested ways the federal government could improve the system for borrowers:

She noted that the psychological burden of debt could worsen if payments were stretched longer. There must be a balance between ensuring payments are affordable and allowing a reasonable number of borrowers to actually pay off their debts, she added.

Del Pilar suggested repayment plans should be 10% or less of a person’s discretionary income and include cancellation after 15 years or less.

In late August, weeks after the National Seminar in July, the Biden administration’s new student loan forgiveness plan addressed the latter issue – but only for undergraduate borrowers: They would be required to pay no more than 5% of their discretionary income monthly. And loan balances would be forgiven after 10 years, instead of 20, for those with loan balances of $12,000 or less, according to the Federal Student Aid website.

Share
Author
Marie Fazio
of The Times-Picayune/New Orleans Advocate for EWA
Related Skills
Investigating the Pandemic’s Effects on America’s Youngest Learners
How an EWA Reporting Fellowship helped me (Alia Wong) better understand whether and how COVID’s unpredictability, stress and isolation undermined kids’ development
How to Cover Indigenous Students Authentically and Accurately
Native reporters and educators provide tips for covering Indigenous students amid critical race theory claims, renewed efforts to teach Native history, and some state rollouts of reduced or free colle
The Student Mental Health Crisis: Resources for Reporters
Featuring recent interviews with education journalists and experts who discussed the nation’s student mental health crisis at EWA’s 2022 National Seminar, this report helps reporters better cover
A Tale of Two Math Terms: An Infographic Story About When to Use Percent Change vs. Percentage-Point Change
Meanville, USA, was an average American town. Until one day, a local journalist had to figure the best way to explain how town administrators planned to spend a sudden windfall ...
Percent Change Versus Percentage-Point Change: What’s the Difference? 4 Tips for Avoiding Math Errors
Many people get 'percent change' and 'percentage-point change' confused. Use this tip sheet, featuring insights from data journalism pioneer Jennifer LaFleur, to get it right.
Load More
x