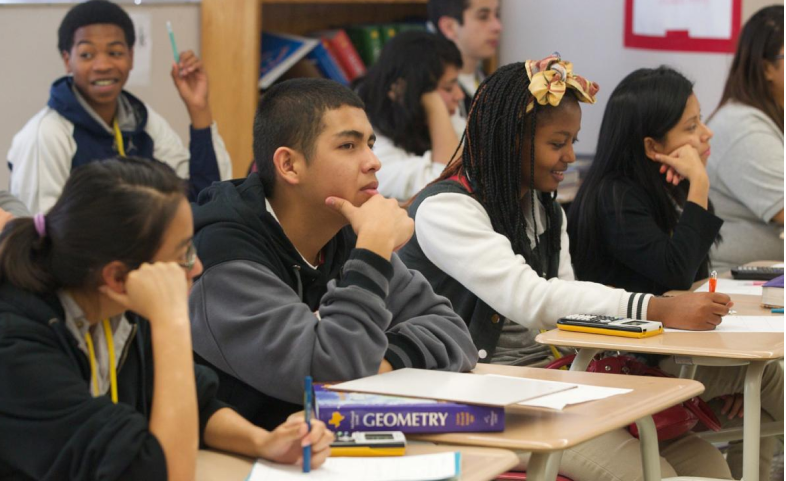 Slight Gains for Hispanics on ACT, but Achievement Gap Persists

More Hispanic students are taking the ACT college-entrance exam, and in some states their scores inched up, new data show. But the achievement gap persists for the class of 2017, with many Hispanic students failing to meet benchmarks for university-level work.

More Hispanic students are taking the ACT college-entrance exam, and in some states their scores inched up, new data show. But the achievement gap persists for the class of 2017, with many Hispanic students failing to meet benchmarks for university-level work.

Nationally, the participation rate for Hispanic students has been steadily increasing over the past five years, from 14 percent in 2013 to 17 percent this year, according to ACT results issued this month. Nearly 350,000 Hispanic students in the graduating class of 2017 took the ACT. Over the past five years, the average composite score for Hispanics has held steady at between 18.7 and 18.9.

In Education Week, reporter Catherine Gewertz led her September 13 story on the ACT scores with the good news for Hispanic students. They “notched a special victory: Their level of college-readiness rose even as more of them took the exam,” wrote Gewertz.

As the article explains, 24 percent of Hispanics met three or more of the ACT’s college-readiness benchmarks in 2017, compared with 23 percent in the class of 2016.

In the individual subjects, national results showed Hispanics performed the best in English with 46 percent meeting the ACT benchmark, followed by reading with 33 percent of graduates doing well. Scores were lower in math and science, with 26 percent and 22 percent respectively reaching the benchmark.

In all, more than 2 million high school graduates — or 60 percent of the 2017 graduating class —  took the ACT test. The average composite score for all students was 21.0 out of a possible 36.

At the same time, the scores painted a more worrisome picture when comparing participation rates and scores by race and ethnicity.

(The English test seeks to measure the conventions of standard English, such as punctuation and usage, the production of writing, and usage, including word choice, style, and tone.)

A look at several states with high Hispanic enrollment showed a mixed bag when comparing 2017 graduates with those from the year before who met all four college readiness benchmarks: 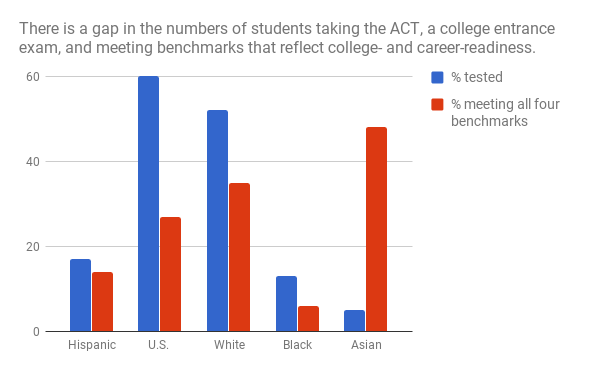 The gap has been well-documented but “we didn’t know it was this bad,” Marten Roorda, ACT’s chief executive officer, told The Washington Post’s Nick Anderson.

The Post also noted that just 9 percent of underserved high schoolers — defined by the ACT as low-income, minority and the first to go to college — met the four benchmarks.

Anderson spoke with Natasha Ushomirsky, a policy development director for the Education Trust, a nonprofit organization that advocates for disadvantaged students.

Ushomirsky said, “achievement gaps reflect long-standing disparities in the quality of teachers, rigor of curriculum and degree of academic support available to poor and minority children.”

Another troubling issue in the new ACT report: the number of students who requested waivers of the registration fee who did not take the ACT. During the 2016-2017 academic year, more than 650,000 fee waivers were granted but 28 percent, or more than 180,000, were not used. The registration fee to take the ACT is $46 without the writing test. ACT did not have any breakdown of the waivers used or unused by race or ethnicity.

Results for the other major college entrance exam, the SAT, are scheduled to be released later this month.