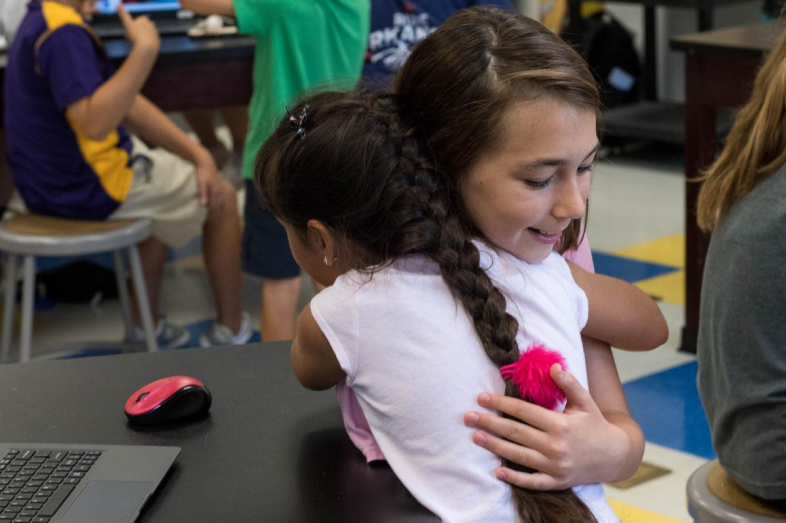 Social and Emotional Learning: From Theory to Practice

“We haven’t yet built community,” teacher Tamara Alston said. “We haven’t figured out how we work together.”

Even as academic lessons pick up, she said teachers also spend time during the first six to eight weeks on things as simple as how to say “good morning,” how to walk into a room and how to play on the playground. The school also focuses on helping students understand how to have healthy disagreements, and how to treat guests and to hold one another accountable.

It’s part of a curriculum—although at first, it wasn’t formalized—to build students’ social and emotional skills. And everyone in the building is on board, according to Alston.

“This is something that we value as a school,” she said. “The grown-ups value it.”

Alston shared her experiences as part of a panel discussion on social and emotional learning at the Education Writers Association’s National Seminar in Los Angeles this spring.

There is growing interest in the role schools can and should play in fostering social and emotional learning. Definitions for the term vary, but one leading organization in the field, the Collaborative for Academic, Social, and Emotional Learning, describes SEL as addressing:

“… the knowledge, attitudes, and skills necessary to understand and manage emotions, set and achieve positive goals, feel and show empathy for others, establish and maintain positive relationships, and make responsible decisions.”

The Aspen Institute in 2016 launched the National Commission on Academic, Social, and Emotional Development, a coalition that is working to explore and advance the idea in schools.

“In truth, they’re all good people trying to do the same work,” he said during the EWA panel. ”But you’re going to hear it from many places and everyone has their own framework.”

Berger added: “My perspective is that … it’s a vision of school in which kids, not just the social development of kids, but their character as human beings, who they are in the world, matters as much as their academics. And it has to permeate a school for it to be real.”

Alston said her Seattle public school uses surveys of students to better understand and address their needs. One survey, she said, indicated students didn’t believe anyone missed them if they were absent for a day. In response, educators began telling students when they came back, “We’re glad you’re back. We missed you while you were away.”

When discipline issues arise, “we try to get to the root of what happened,” Alston said. “We think about who this kid is, what their context is, what happened that made this other thing happen.”

The school adopted the Caring School Communities curriculum, which closely aligned with what many teachers were already doing in their classrooms.

How Do Kids and Adults Treat Each Other?

Berger of EL Education said it doesn’t matter what the adopted curriculum is.

“The program doesn’t matter, what matters is when you ask how kids and adults treat each other,” Berger said.

At the core of social emotional learning, he said, is a culture of a school that asks students to “be good human beings.”

And whether or not a school adopts a formal curriculum specific to social emotional learning, it’s going on one way or another. Every interaction is a learning experience for children.

“This is not a choice to adopt,” Berger said. “You are already doing it all day long.”

While data is an important tool, he said, and surveying students and parents is encouraged, it’s key not to try and quantify outcomes from a social program.

But the practices of the program should be discussed constantly, he said.

Journalists, he said, should note how the adults model the behavior they expect to see from students.

A Dose of Skepticism

The push for social and emotional learning in schools, however, has not been immune to criticism. Chester E. Finn, Jr. of the Thomas B. Fordham Institute, wrote a June 2017 opinion piece for Education Week that offered a skeptical view.

“Today, few people talk explicitly about self-esteem or other kooky curricular enthusiasms of the past, but the worldview and faux psychology that impelled them have never gone away,” he wrote. “Of late, they’ve reappeared—and gained remarkable traction—under the banner of social-emotional learning.”

Finn notes that SEL has “generated much buzz lately,” including strong financial support from private foundations. Although Finn does see value in some elements of SEL, he expresses concern and laments that it often seems divorced from traditional notions of building character or citizenship. He predicts, “social-emotional learning will almost surely turn out to have no real scientific foundation—just a lot of much-hyped ‘qualitative’ and ‘anecdotal’ studies that nobody could replicate via gold-standard research.”

One organization that has actively supported SEL work is the Chan Zuckerberg Initiative, a venture philanthropy founded and led by Facebook CEO Mark Zuckerberg and his wife, pediatrician Priscilla Chan.

Brooke Stafford-Brizard, a director at the Chan Zuckerberg Initiative, also spoke on the EWA panel. She said that in order for adults to model what they expect, they must feel a sense of trust and belonging at work.

Stafford-Brizard said she is optimistic about the prospect of teacher preparation programs incorporating more social and emotional teaching skills. More and more, schools are recognizing the need to focus on developing the whole child.

The practice of implementing social and emotional learning, Stafford-Brizard said, is evolving as brain science evolves.

A Sense of Connectedness

Kelly Stuart’s organization, the Center for the Collaborative Classroom, focuses on integrating social development skills and literacy. In a simple reading lesson, students can also be learning how to take turns and how to listen to each other.

An example lesson, she said, is a third-grade class reading non-fiction. Students work in small groups to decide on a topic and do research together, and have to agree and disagree respectfully.

“When students have a sense of connectedness,” Stuart said, “that’s what makes a difference long-term.”