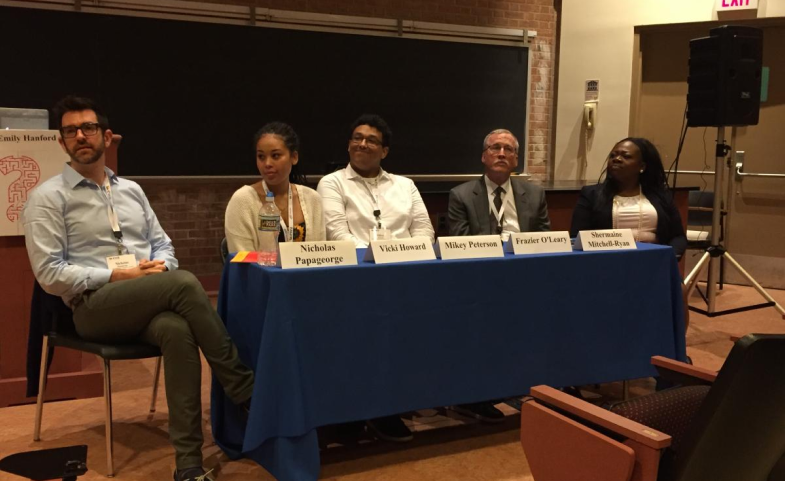 Students Are Smarter Than They — or Their Teachers — Think

Mikey Peterson didn’t care about class for most of his time in school. And he felt that his teachers, for the most part, did nothing to help.

“At the time, it didn’t really resonate with me because I didn’t care,” Peterson said during a June 1 panel at the Education Writers Association’s national conference. “I was in a really down state of mind. I didn’t care about school, didn’t care about anything, just basic depression.”

He added, ”After I met my (11th-grade) English teacher, she built up my confidence, and so I got out of my low point in high school.”

Peterson became aware that his friend was getting a richer experience in his AP class, so he asked if he could sit in. When he did, he said, he learned “so much” in 30 minutes. What was really eye-opening was that the AP teacher was teaching about black author Zora Neale Hurston — the first time Peterson could recall hearing a teacher teach about a non-white author.

Peterson was motivated, took honors English and two AP classes during his senior year, and graduated from Hammond High on May 30. He plans to attend West Virginia University and major in vocal performance.

Fellow Hammond High graduate Vicki Howard, who also is black, shared a much different experience. Since she was in elementary school in Howard County, Md., she was placed in accelerated classes and was expected to do well, both by her teachers and her parents. And, according to Howard,she was also the only black student in her AP classes.

“I had friends who were in the … regular classes who I could see that it was really hard for them to step up in the classes if they were on the regular track from elementary school even to middle school,” said Howard, who plans to attend the University of Maryland, College Park. “It just kind of seemed like you were kind of set where you were.”

As Erica Green reported in The Baltimore Sun’s series “Bridging the Divide,” Howard County education officials are aware of the opportunity gap. The district ”has ordered more testing to spot bright students who might have been missed in the past,” the story explains. ”The district is also taking other measures to eliminate barriers to advanced courses, according to the story, such as dropping some prerequisites, and encouraging students and their families to get more involved in the course selection process.”

The Sun story, which featured Mikey Peterson and Vicki Howard, also pointed to efforts by Hammond High School Principal Marcy Leonard. She had held assemblies to encourage minority students to take more advanced classes. But, the story noted, “it wasn’t until about two years ago that Leonard felt she had the credibility to look out over the auditorium full of students of color and be blunt.”

The experiences described by Peterson and Howard starkly illustrate a finding in a research paper by Nicholas Papageorge, an assistant professor of economics at Johns Hopkins University.

“Teacher expectations matter,” he said, summarizing the research. “We do find evidence of a causal effect” on student outcomes.

Race appears to have something to do with expectations. An earlier research paper, Papageorge said, showed that, on average, white teachers are 30 percent less likely to say that a black student will go on to college than a black teacher would say of the same student.

An outlier, however, was part of the panel, and so was one of his students. The outlier is Frazier O’Leary, a teacher who is retiring after 47 years, with more than 20 at his current school, Cardozo Education Campus (formerly Cardozo High School) in Washington, D.C. One of his former students is Shermaine Mitchell-Ryan, a science and technology fellow with the American Association for the Advancement of Science who has a doctorate in cancer biology from Wayne State University’s School of Medicine.

“I happened to be, probably by definition, a very risky investment,” Mitchell-Ryan said of herself as a high school student. “I came from a home environment which was — not the best. I wouldn’t go to school because my home was being raided. … And this guy (O’Leary) invested resources in me. He wouldn’t allow me not to come to school. And I tried with all my might to fail; I tried really hard. And he wouldn’t allow me to do that.”

What did O’Leary see in Mitchell-Ryan?

“She was an award-winning poet in high school. She was an actress when she was in high school. Her writing was phenomenal. And she’s always been a star,” he said of her. “Her image of herself was not that of a star. And we can’t quit on anybody.”

Mitchell-Ryan said O’Leary has that same determination to help all of his students succeed. O’Leary said he had “a couple of white students” in his 47 years as a teacher — proving that he does not have the lower expectation for students of color that Papageorge’s research shows many white teachers have.

One thing the panelists agreed on is that white teachers who have students of color in their classes need to be more culturally aware, not have low expectations of students who might appear to be disadvantaged, and not “coddle” them, but “push” them to greater achievement.

Peterson became emotional after hearing O’Leary and Mitchell-Ryan tell their stories and talk about each other.

“I definitely feel like I was lost in a bunch of students. I wasn’t, you know, the best crop in the field, if you would, so they kind of just bypassed me. And I feel like — if I had Mr. Frazier — wow, I feel like I’d be, I don’t know, I’d be finding a cure to cancer.”

Then, turning to Mitchell-Ryan, Peterson said, “I feel like I could have been you had I had (O’Leary).”

“And you still can be!” Mitchell-Ryan said.

“You know what? I still can be,” Peterson said, drawing applause from his fellow panelists and the audience.