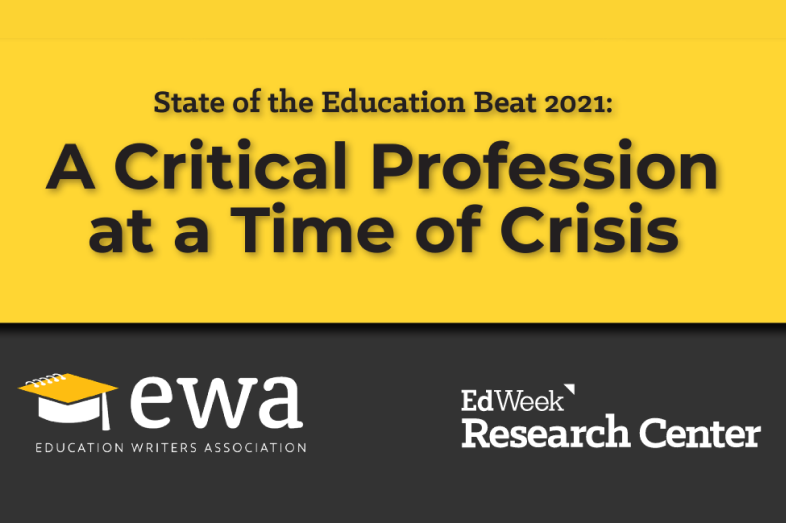 Who are today’s journalists on the education beat? What obstacles do they face as they seek to inform the public? Where do they turn for information? What do they believe needs to change about their own profession?

EWA partnered with the EdWeek Research Center once again to answer these and other questions in State of the Education Beat 2021. The new report is based on a national survey of more than 400 education journalists – plus follow-up interviews with a smaller group of education reporters and editors.

With education at the center of the news, journalists who cover the topic face a host of challenges, including harassment, threats, and obstacles to gaining access to education institutions, officials and public information. Plus, a racial mismatch between the largely white education journalism workforce and the students they cover is a critical concern of reporters and editors on the beat.

These are among the key findings of the State of the Education Beat 2021 report, produced for the Education Writers Association by the EdWeek Research Center. The report is based on a national survey in 2020 of more than 400 education journalists from around the country, as well as phone interviews with a smaller group of survey participants. The report was released January 27, 2021, at a virtual event featuring a video presentation and panel discussion with leaders from EWA and the EdWeek Research Center.

“The American public depends on education journalists now more than ever to stay up-to-date on a fast-changing and complex new reality,” said Caroline Hendrie, EWA’s executive director and herself a former longtime education journalist. “These dedicated journalists know their work makes a real impact. But they face a host of challenges, from harassment and hostility to limited newsroom resources that stretch them way too thin.”

The report revealed concern about a racial mismatch between education journalists and today’s students. The report found that 82% of survey respondents identified as white, compared with about half of the nation’s K-12 and undergraduate student populations. The majority of education journalists surveyed, 63%, view this demographic discrepancy as a major problem.

EWA Board of Directors President Greg Toppo, a longtime national education journalist, said the mismatch may have a real impact on coverage: “One of the things that we don’t really talk too much about is the idea of story choice, and the idea of, if you have a white reporter and a white editor choosing certain kinds of stories, reporting may be fine, the reporting may be incredibly sensitive and compelling and really careful. But the framing might not be what it should be. And I think that’s as big a problem as anything.”

“Journalists looking like the communities they cover is really, really important,” Toppo said. “And we should do everything we can to make that happen.”

To address the demographic mismatch, more than half of survey respondents said the priority should be diversifying the education journalism workforce. But opinions differed by age, with younger journalists more apt to say hiring is most important. Older journalists were more likely to prioritize other steps, like featuring more people of color in news coverage or providing anti-bias training to journalists.

Holly Kurtz, the director of the EdWeek Research Center, noted that the survey found overwhelmingly belief among education journalists that their work is making a difference. “Our survey found that nearly all respondents agree that their education journalism has a positive impact on the community,” Kurtz said. “That was the case in 2015, too, but since then the sentiment has only grown stronger.” In all, she noted, 97% of respondents completely or generally agreed that their journalism makes a positive impact on the community.

Kurtz added that for a lot of education reporters, “making a difference is a powerful motivator. Many see their work as a calling as much as a job.”

The EWA report provides an array of other important findings, including:

EWA is putting forward five calls to action based on the report.