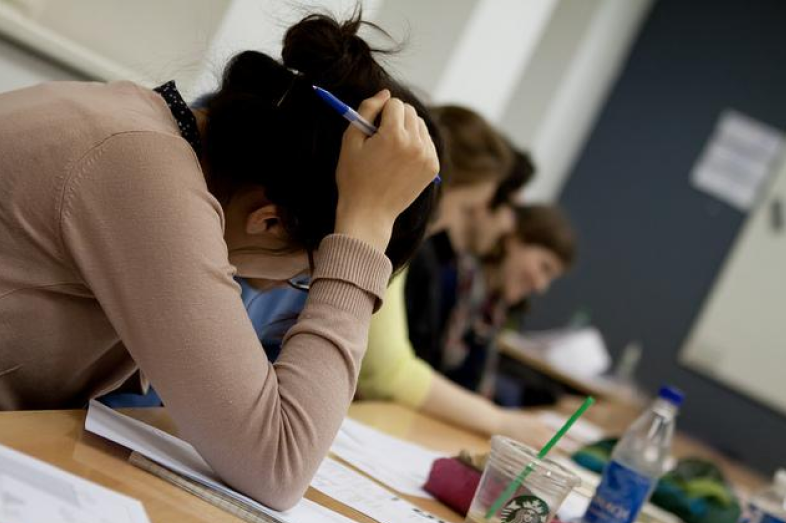 Testing and Test Prep: How Much Is Too Much?

It’s not hard to find a teacher willing to bend your ear about the volume of standardized testing in schools today, and the pressure for “test prep.” But how widespread are such concerns among educators? And what’s the on-the-ground reality they experience?

New survey data suggest these impressions about over-testing and test prep are more than just anecdotal: They are the norm for the majority of public school teachers.

Eighty-one percent believe their students spend too much time taking tests mandated by their state or district, according to the study by the Center on Education Policy, based at George Washington University.

How much time is too much? On average, students spend 10 days taking district-mandated tests during the school year and nine days taking state-mandated tests, the teachers estimate. But underneath these averages are wide variations, from less than a week (the most popular response in both cases) to more than a month, the survey finds.

When it comes to test prep, 62 percent of teachers say they spend too much time readying students for state-mandated exams. And 51 percent feel that way about district-mandated tests, according to the nationally representative survey conducted in late 2015.

Of course, not all test prep is created equal. It can mean many things, some good, some not so good. The CEP report defines it as “drilling students on specific content and skills covered on the tests, using practice tests, and/or teaching test-taking skills like time-management and pacing.”

Test prep is especially prevalent in high-poverty and medium-poverty schools, according to the survey. Thirty-six percent of teachers spend at least a month on test prep for state-mandated exams, for example. By contrast, the figure is 23 percent in low-poverty schools.

These are just a few of the findings from the Center on Education Policy report, conducted with financial support from the Bill & Melinda Gates Foundation. It’s based on a survey of more than 3,000 teachers. The data, issued last month, offer fresh insights into the views of classroom educators on testing, standards, Common Core implementation and more.

Others have reported on important findings regarding declining teacher morale, including USA Today and Education Week. The short version is that many teachers are losing a commitment to their field amid multiple frustrations, including pressures around testing.

“While the teaching profession in the U.S. may not be in full blown crisis, … forces outside of teachers’ control may be taxing their good will and dedication,” the report says. “The most notable stressors revealed by the survey are the time devoted to testing, changing demands from outside the classroom, and teachers’ perceptions that they lack a voice in major decisions.”

Maria Ferguson, the Center on Education Policy’s executive director, offered a sneak preview of some of the study’s findings during a presentation at an Education Writers Association seminar earlier this year in Los Angeles, titled Teaching and Testing in the Common Core Era.

Among the challenges she cited for teachers was the “constantly changing slate of demands on teachers.” Ferguson said it’s worth further exploring the extent to which such circumstances impede effective teaching.

Certainly, recent changes in state testing systems have been a major adjustment for educators. Indeed, many states that had planned to use Common Core assessments developed by two major testing consortia have recently shifted gears and gone their own way.

In any case, whatever assessments teachers encounter, the CEP data indicate that the time spent on testing is too much for most teachers. Only 16 percent report that time for state- and district-mandated tests was about right, and a scant 1 percent say it is not enough.

The amount of time teachers reported for such assessments varies widely:

The survey comes as concerns about time for testing have mounted, and even gotten the attention of the White House, which urged states and districts last fall to rein it in. (Of course, many analysts are quick to point out that federal testing requirements have contributed to the problem.)

Another study, by the Council of the Great City Schools, closely examined testing in large urban districts. Its detailed “testing inventory” report found that students in big-city districts spend, on average, 20 to 25 hours each year taking mandatory standardized tests.

Despite the concerns among teachers about over-testing, a clear majority of those surveyed by CEP are not ready to throw out state-mandated and district-mandated assessments altogether. They just want to reduce their frequency or length.

“While teachers strongly agree that test prep and testing take up too much time, they generally do not support the wholesale scrapping of mandated tests,” the CEP report says. The center argues that “teachers should be included in local and state discussions about which tests can be eliminated and which should be maintained.”

Although not the focus of this survey, many educators also have voiced deep concerns about the use of standardized test scores to evaluate students, teachers, and schools.

Regarding test prep, the survey details the wide variation in time spent on these activities, from less than a week to more than a month.

The report cautions that its line of questioning was not meant to imply that “all test prep activities are an ineffective use of time — if the activities are helping students master the knowledge and skills in the standards they can be useful.”

A Typology of Test Prep

Meanwhile, this spring the teacher-advocacy group Teach Plus issued a report on test prep, drawing on survey data from educators in the Teach Plus network. It even created a “typology” of 17 common test-prep activities, based on information gathered through focus groups with teachers. Some activities are valued by educators, some not, according to the report.

Among the “highly valued” activities:

As with the CEP report, the Teach Plus survey finds an overall negative tilt toward the amount of time for test prep. Fifty-seven percent of teachers surveyed say they spend “too much” time on test prep, compared with 43 percent who say it is “about right” or “too little.” (The survey is not nationally representative of educators.)

But it also finds that the attitude of teachers is influenced by the conditions they face. For example, teachers are more favorable toward test prep when they have leeway to select the kinds of activities they believe would be most “appropriate and valuable,” and when the tests align with the curriculum.

“Most people think of test prep as one monolithic iceberg of time, not valued by teachers and detrimental to instruction,” the report says. “But teachers use ‘test prep’ to refer to lots of different things.”