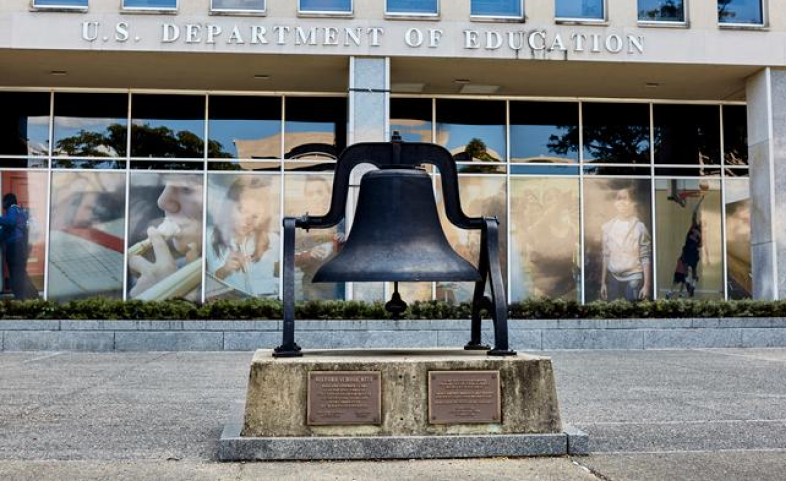 Connecticut education chief Miguel Cardona has been nominated by President-elect Joe Biden to serve as his education secretary, a cabinet position that requires Senate confirmation.

Cardona, a longtime educator and former elementary school teacher, would be the second person of Puerto Rican descent to hold the job, following John B. King, who served as secretary in the final year of the Obama administration. Biden had pledged to nominate someone with classroom experience.

Cardona would follow philanthropist and school choice advocate Betsy DeVos, who is one of President Trump’s longest-serving cabinet members.

The Education Department is one of the newer federal departments, created during President Jimmy Carter’s administration and beginning its work in May of 1980.

The department’s stated mission is to “supplement and complement the efforts of states, the local school systems and other instrumentalities of the states, the private sector, public and private nonprofit educational research institutions, community-based organizations, parents, and students to improve the quality of education.” The department has about 4,400 employees (including political appointees) and an operating budget of about $68 billion.

If confirmed, Cardona would be the 12th U.S. secretary of education. Here are some fast facts (and a few quirky tidbits) about the other 11 people to hold this Cabinet-level post:

DeVos resigned Jan. 8, 2021, two days after a pro-Trump mob stormed the U.S. Capitol. In her resignation letter, DeVos said while she was proud of the work she had done for the administration, “There is no mistaking the impact your rhetoric had on the situation, and it is the inflection point for me.”

She was one of the most controversial picks for education secretary in recent memory, and Vice President Mike Pence had to break a 50-50 Senate confirmation vote tie in her favor. Coming into the office, she pledged to make school choice the linchpin of her policy priorities. But while she promoted the idea, she did not make much policy progress on that front. She rankled some civil rights advocates by rolling back many Obama-era rules and regulations around LGBTQ student protections. She also led a rewrite of Obama Administration rules governing how colleges and universities were required to handle allegations of campus sexual assault and Title IX violations to give the accused more rights to defend themselves. In writing about her legacy, Education Week’s Andrew Ujifusa concluded that the continual swirl of controversy around DeVos “contributed to the weakening, if not rupturing, of a bipartisan consensus around school choice, accountability, and labor policy that had become unsteady before she took office.” 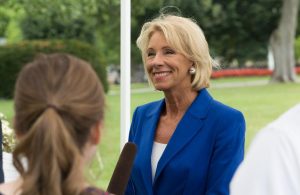 As a student at Phillips Exeter Academy, King rebelled against the strict rules of the elite New England boarding school, and was expelled during his junior year. “I sort of resented adult authority,” he told The New York Times. “At the time, I felt like adults had let me down in my life.” He later graduated from Harvard, and began his career teaching high school social studies in Boston and Puerto Rico. King also co-founded a charter school and served as New York commissioner of education.

King earned a law degree from Yale, as well as a master’s in education and a doctoral degree in educational leadership from Columbia University. As of last year, King was still paying off his student loans. 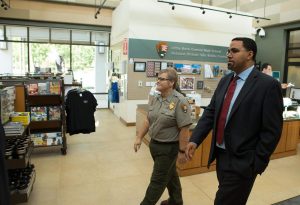 Duncan’s prowess on the basketball court is well known. Following college, he played professionally in Australia for four years, after being turned down for the Boston Celtics. He was a standout for the NBA All-Star Celebrity Games from 2011 to 2014. Duncan’s decision to issue waivers to states from some of NCLB’s requirements (a response to the long delay by Congress in reauthorizing the federal education law) was decried as overreaching his authority by some Republican lawmakers. ESSA now prohibits the office of the education secretary from incentivizing states to adopt — or reject — specific academic standards — a response to Duncan’s push on behalf of the Common Core. 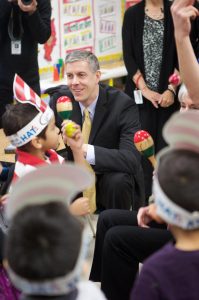 As an advisor to the president prior to her appointment, Spellings helped to write the No Child Left Behind Act. She appeared on Celebrity Jeopardy in 2006, coming in second to actor Michael McKean. Now president of the University of North Carolina system, Spellings recently told NPR that “the reason we’ve moved the needle for poor and minority students is because we’ve cared enough to find out how they’re doing and made them a priority … The federal role in education is, and has always been, a civil rights focus.” 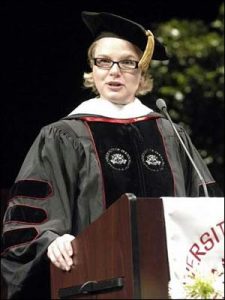 Margaret Spellings speaking at the University of Houston in 2006 (Wikimedia Commons/U.S. Dept. of Education)

Paige came to Washington after serving as the superintendent of the Houston school district. He is the only U.S. education secretary to have prior experience as a university football coach — and a highly successful one, at that. Among the notable players he recruited and coached at Jackson State University from 1964-68 was Lem Barney, who went on to play for the Detroit Lions and was inducted into the Pro Football Hall of Fame. The No Child Left Behind Act was approved during Paige’s tenure as education secretary. Also during his tenure, the department revised Title IX language to allow single-sex classrooms in public schools, provided participation was optional. 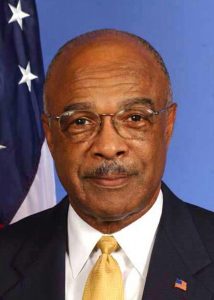 Riley turned down Clinton’s first offer: to be nominated for a spot on the U.S. Supreme Court. That vacancy was eventually filled by Ruth Bader Ginsburg. Riley was so popular as South Carolina’s Democratic governor that the state’s constitution was amended to enable him to run for, and eventually serve, a second term. After his tenure as education secretary Riley was named a distinguished professor at his alma mater, Furman University. In 2001, Washington Post columnist David Broder called Riley one of the “most decent and honorable people in public life.” 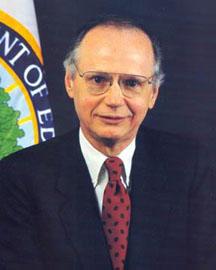 Alexander is the chairman of the Senate committee responsible for vetting DeVos. He praised DeVos during her confirmation hearing this month. As a senator, Alexander was a key architect of the federal Every Student Succeeds Act, which replaced the No Child Left Behind Act as the main federal law for K-12 education. He also served two terms as governor of Tennessee and made two unsuccessful bids for president (in 1996 and 2000). Known for his penchant for plaid shirts, Alexander is a classically trained pianist, and his inspired performance of a Jerry Lee Lewis song brought down the house at a festival in Memphis in 1982 … when he was governor of Tennessee. In 2008, he opened for The Four Tops, performing with the Memphis Symphony Orchestra and an audience of 20,000. 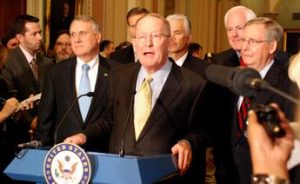 A Democrat, Cavazos was the first Hispanic to serve in a president’s Cabinet, and served under two Republican chief executives: Reagan and George H.W. Bush. But Cavazos and Bush clashed over the administration’s decision to bar federal aid from colleges and universities that offered scholarships specifically to minority students. Cavazos’ “terse” resignation letter “omitted the customary thanks to the President for the honor of serving in the Cabinet,” according to The New York Times. 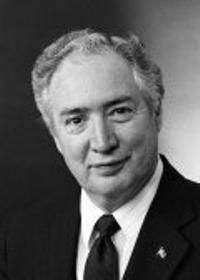 Bennett is the author and editor of “The Children’s Book of Virtues,” later developed into an animated television series by PBS. In 2003, several news outlets reported that the “relentless moral crusader is a relentless gambler, too.” While Bennett acknowledged his gambling activities and said that over a decade of betting he likely broke even, subsequent news stories estimated his losses during that time frame at around $8 million. 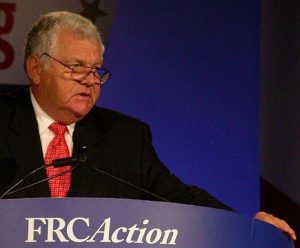 Prior to the creation of the U.S. Department of Education, Bell was the nation’s highest-ranking education official, serving as the U.S. commissioner of education under presidents Nixon and Ford. A member of the Mormon church, Bell focused early in his tenure on trying to ban “controversial” books from schools, including “The Catcher in the Rye,” “Lord of the Flies,” and “Slaughterhouse-Five.” According to a 1981 profile of him, Bell’s “favorite dish is pumpkin pie, but he’s also fond of a late-night snack of a bowl of bread and milk.”

As the nation’s first education secretary, Hufstedler also became the highest-ranking woman in the federal branch. Hufstedler was one of 72 women featured in a debut set of “feminine” trading cards, intended to compete with male-dominated cards for professional sports. The original set is now on display in the Museum of Modern Art in New York. 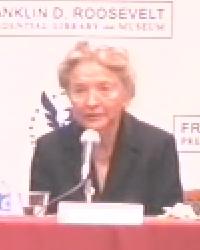