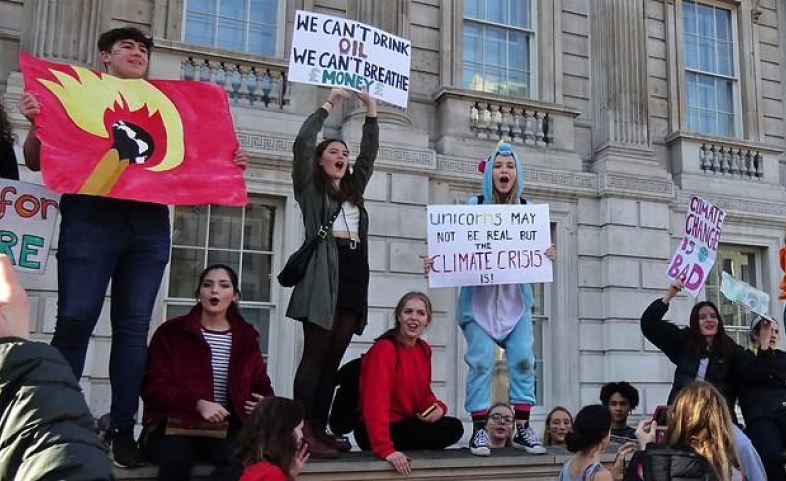 The State of Civics Education in 2019

Is civics education in crisis? And how do we square these troubling data points with the throngs of students, bolstered by the 2016 election and school shootings, taking to the streets and demanding action from politicians?

At the Education Writers Association’s annual conference in May, panelists discussed the state of civics education—and what constitutes citizenship and civic participation in the first place.

The common distinction between content knowledge and civic action is a “false dichotomy,” said Kei Kawashima-Ginsberg, the director of the Center for Information & Research on Civic Learning and Engagement at Tufts University.

The traditional theory says knowledge comes before it is parlayed into action, she told the EWA audience in Baltimore. But many students come into school without believing their actions matter.

“When you’re stuck with that vacuum of basic trust and a belief that they can do something with other people to make positive change, no amount of knowledge of Supreme Court cases and whatever else you want to teach them will resonate,” said Kawashima-Ginsberg. When students can participate in the process directly, they become more open to learning about how the system works.

That doesn’t mean dumping the textbooks.

“We have to also teach them,” Kawashima-Ginsberg said, “how the court system works and how the laws are made,” so they can grow up to have a say in the system themselves, whether through voting, policymaking or protesting.

Such basic lessons on how the government works have been neglected in recent years, some panelists said. The emphasis on reading and math test scores under the federal No Child Left Behind Act pushed social studies to take a backseat, Kawashima-Ginsberg said.

While that federal law has been replaced, she believes “we lost a great workforce that used to be able to teach social studies and civics,” while NCLB was in effect.

School-based professional development can help equip new humanities teachers, said Viviana Perez, of Democracy Prep Public Schools, a charter schools network. However, she noted that the issue is systemic, and in teacher training programs, “the preparation is cursory at best. …You’d really have to change that at a state level.”

Kevin Mahnken, a reporter at The 74 and the moderator of the discussion, recently examined the Democracy Prep network and its mission to place civics education at the center of its 21 schools.

“Unique among both charter and district schools, Democracy Prep’s institutional focus lies in preparing kids not just for the rigors of college, but also for the demands of citizenship,” Mahnken wrote of the network.

While civics education has often focused on activities like voting and volunteering, recent events have thrust less anodyne activities like student walkouts into the civics debate. Mahnken noted that some observers, especially conservatives, worry about the potentially partisan nature of the new wave of student activism. Some school systems, for example, have opted to allow students to take an excused day (or more) off to join protests — a policy that Checker E. Finn Jr., a senior fellow at the Thomas B. Fordham Institute warned blurs the line between civic engagement and civil disobedience.

He wrote, “It’s hard to believe that letting [students] cut high school for three days a year to do whatever they like—or whatever someone inveigles them into doing—in the name of civic engagement is going to improve their understanding of civics.” Finn also suggested that “adults with agendas of their own may co-opt students” for causes that “may be at odds with their parents’ values.”

Shelina Warren, a longtime teacher at Paul Laurence Dunbar High School, challenged the idea that students are brainwashed when then engage with controversial issues at school.

Warren’s students created an awareness campaign, making t-shirts that said, “Know Your Rights.” The climax of the project was a roundtable discussion with students and local police officers.

“I will tell you, to be frank, my students … did not want to go into the classroom with police officers,” Warren said. After an ice-breaker, however, the participants launched into deep conversation, discussing fear and assumptions.

“By the time it ended, none of the students wanted to leave, and the police officers had friends,” Warren said. The schoolwide interest in the project, including financial support from the principal, taught the teenagers that “they can make a change, and people do want to hear from them.”

Is there a civics achievement gap?

Even with innovative lessons in some schools, national surveys suggest that most students fall short of what’s traditionally considered a basic understanding of civics. In 2018, just 24 percent of the eighth graders who took the National Assessment of Educational Progress (NAEP) civics exam were deemed “proficient.” And white and Asian students consistently score higher on those exams than their black and Hispanic peers.

How much weight should we put on those unsettling statistics? Will low comprehension of how U.S. government and civil society function follow students into adulthood and exacerbate inequality?

“There is a civic learning gap among kids that has been pervasive over the NAEP civic exam for many years,” said Mahnken. “The upshot is, as adults—minority adults, low-income adults, immigrant adults—they are also less likely to be involved in their communities, less likely to vote.”

Kawashima-Ginsberg disagreed that marginalized communities are less civically engaged. She also questioned the reliance on metrics like test scores and surveys to measure civic engagement.

Many poor people of color “have interacted with bodies of government much more extensively than white affluent people have,” she said. They might receive food stamps or have experience in court and with public housing, for example.

Young people learn early on to navigate those systems and prejudicial forces, Kawashima-Ginsberg added in an email after the Seminar. They learn to “think politically,” demonstrating civic competency in ways that should be acknowledged by educators, she wrote.

For education reporters, monitoring how prepared schools and teachers are to meet traditional academic standards, in civics and other subjects, remains a basic journalistic endeavor. But the panel discussion drove home that reporters should also keep in mind the expansiveness of, and difficulty of measuring, all that civic participation can entail.