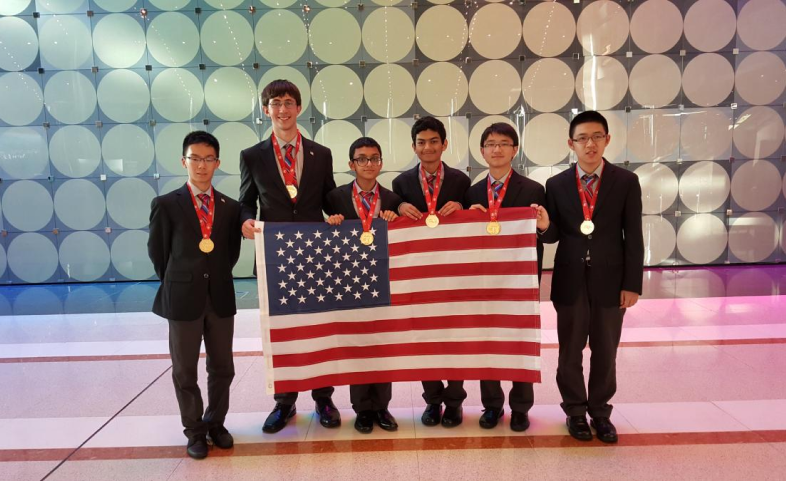 This is the second consecutive year that U.S. students have finished on top in the International Mathematics Olympiad, although there have been impressively strong showings by American teams for much longer than that.

After learning of their gold-medal victory in the world’s most prestigious high school mathematics competition — held recently in Hong Kong – six American teenagers engaged in a celebratory ritual familiar to many of their peers back home: They went to McDonald’s. But the victors weren’t quite ready to leave the math behind. They ordered 99 Chicken McNuggets, a tribute to a popular brain teaser based on the fast-food chain selling boxes of six, 12, or 20 pieces.

This is the second consecutive year that U.S. students have finished on top in the International Mathematics Olympiad, although there have been impressively strong showings by American teams for much longer than that. While these wins obviously don’t negate the very real problems facing the nation’s public schools when it comes to teaching and learning of math fundamentals, the Olympiad victories are certainly worth celebrating.

This year’s competition drew 602 students representing more than 130 countries. Over the course of three days, the students work on their own to solve three math problems. (Some examples are here.) Those individual scores are then combined for the team total. At the end of the three-day event last month, the U.S. came out on top with a combined score of 214 points out of a possible 252. South Korea was second with 207, and China finished third with 204.

The U.S. students each earned individual gold medals — including Allen Liu of Penfield, New York and Yuan Yao of Exeter, New Hampshire who posted perfect scores. But they also consider this very much a team sport.

“Being around a lot of like-minded people really helps you,” Ashwin Sah, who will be a senior this year at Jesuit High School in Portland, Oregon, told me. “Some people have different ideas, and it’s good to see how they solve problems from their point of view, as well. Even though the day of the actual test you’re working individually, all of the things you learn from the other members of your team will be put to very good use.”

By developing their individual skills through teamwork and practice, the students who have succeeded at the math Olympiad have discovered that math can, indeed, be thrilling. What can be discouraging is the response voiced by some who attribute the competitors’ success solely to their race or heritage.

Diminishing the students’ achievements by suggesting they are somehow “less American” because of their skin colors or “foreign” last names — both popular themes in the comments sections on stories about these kinds of victories — is senseless, says author Peg Tyre (who wrote about a U.S. “Math Revolution” earlier this year for The Atlantic). While it’s true students from certain ethnic backgrounds tend to dominate these kinds of academic competitions, that’s often because their parents prioritized academic enrichment opportunities for their kids, Tyre says.

“Most American families haven’t done that because they didn’t know about it,” Tyre says. “Instead of saying ‘they’re not American,’ we should be asking ‘what do they know that we don’t know?’”

Math competitions require competitors to be innovative problem solvers, a skill-set Tyre says “is part of our national identity – we were founded by engineers. That people don’t want to own that is just nuts.”

At the same time, there’s a growing math opportunity gap between kids from low-income families and their more affluent peers, Tyre added. Some states have been lowering the bar on mathematics requirements to help more students graduate. On the other end of the spectrum, “every private school head I talk to says their parents want more math, not less,” Tyre says. “It’s seen as the lynchpin for college admissions and success.” (Three of this year’s six math Olympians attend private or parochial schools.)

Where are the girls?

Another persistent gap to be tackled is gender. It’s no secret that males outnumber females in STEM-related careers, so it also shouldn’t be surprising that boys also dominate the school-age competitive math circuit. But there are multiple campaigns underway to change that and encouraging signs that those efforts are starting to pay off.

Po-Shen Loh, a mathematics professor at Carnegie-Mellon University and coach of the U.S. math team, said the Mathematical Association of America (MAA) is recruiting more girls into the national training camp and providing them with tailored support as they rise through the competitive ranks.

“Both women and men are extremely capable of analytical thinking; I don’t believe that either gender has an advantage over the other,” he told me. “I think that there are social factors at play. When you have a system which is already dominated in one direction, it can sometimes be difficult for other people to break in … I think that’s a sad thing.”

Loh acknowledges that for many Americans, both male and female, a weak foundation in basic math puts many of these kinds of activities out of reach. Math requires mastering a prescribed sequence of “dependencies”. Doing that means being in a school environment with appropriate instruction that can be tailored to individual needs — no easy task for teachers, says Loh. Students also have to be consistent, focused learners. Again, not a cakewalk given the nation’s high rates of absenteeism and the many challenges students face both inside and outside of the classroom.

“Let’s say you miss one dependency … pretty soon you say ‘half of what I’m seeing in this math class doesn’t make sense whatsoever,’” Loh said. “After a while you just say, ‘I’m not a math person.’ But that’s not true. It all happened because you lost one dependency, and everything else was built on top.”

So what’s the solution? Ashwin, 16, says he wants people to know that there are plenty of of opportunities — many of them low-cost or no cost — for students to get involved in competitive math; he was introduced to it through an MAA-sponsored program at his public middle school. (Loh has also developed an interactive website designed for self-guided, personalized math learning.)

And rather than worrying about having a vast reservoir of higher-level math skills, Ashwin says it’s more important to be someone who enjoys solving puzzles and isn’t afraid to try, fail, and try again.

“People sometimes think of math as painful or boring because of their own negative experiences with it, and that’s unfortunate,” Ashwin says. “But this is really more of a creative process. If I can take all of these interesting ideas and put them together, I can get something really beautiful.”