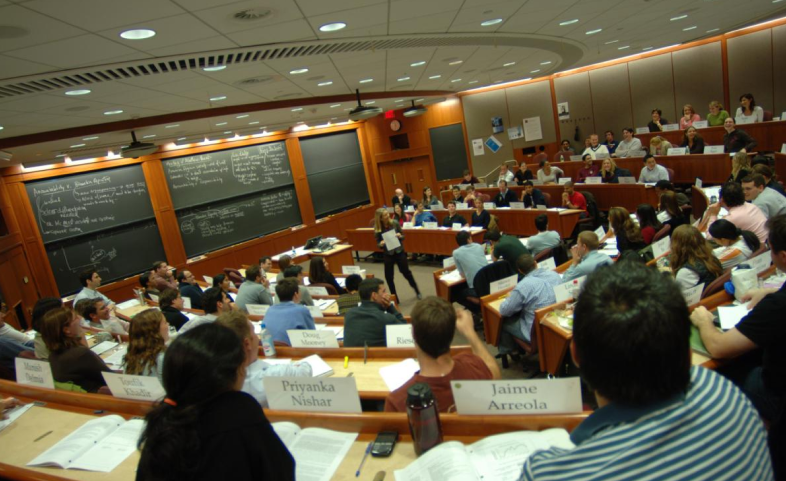 More Americans are pursuing graduate degrees, but it’s the students from wealthier backgrounds who are most likely to earn the degrees that pay the most, a new report shows.

More Americans are pursuing graduate degrees, but it’s the students from wealthier backgrounds who are most likely to earn the degrees that pay the most, a new report shows.

“I think that the idea that people from low-income backgrounds are so unlikely ever to get to medical school or law school is definitely a problem,” said Sandy Baum, a renowned scholar on the economics of higher education and a co-writer of the report.

Between 1993 and 2008 the overall number of bachelor’s degree holders who enrolled in a graduate program within four years of completing their undergraduate studies ticked up from 34 percent to 39 percent.

The findings, published by the Urban Institute, illuminate a facet of the education space that’s less scrutinized than K-12 schools and colleges but accounts for a large chunk of the now $1.3 trillion in student loan debt – 40 percent of all student loan debt according to 2014 data despite graduate students’ making up just 14 percent of the current higher-education population.

The realm of graduate education is wide-ranging, and some graduate degrees yield far higher wages than others, the report shows. Based on 2015 figures, workers with professional graduate degrees, such as doctors and lawyers, earn an average of $163,000 a year between the ages of 45 and 54 – typically the apex of a person’s earnings arc. By contrast, those with master’s degrees, such as education or history, earn about $92,800 annually in that age range, out-earning bachelor’s degree holders by about $15,000 a year. Those with doctorates make almost $144,000 a year, on average. Nearly three-quarters of graduate students are at the master’s level.

There are notable racial and economic differences associated with the types of graduate degrees students pursue and whether they complete their programs. Based on 2008 data, 39 percent of students who as undergraduates came from households in the lowest income quartile pursued graduate* degrees; 45 percent who came from the highest quartile of household income went on to do the same.

More recent data show that though a larger share of black bachelor’s degree holders go on to graduate programs than any other racial group, a quarter of that group enrolls at for-profit institutions that are viewed as being less academically rigorous. Around 6 percent of Asian-Americans, Hispanics and whites enrolled in for-profits. Asian Americans and white students are also more likely to pursue doctoral and professional degrees than their black and Hispanic peers. The same disparities exist along economic lines. Also true: Whites, Asian-Americans and wealthier students are more likely to have completed a bachelor’s in the first place, so they account for a larger population of graduate-school students.

Data from other sources show that Black and Latino students each make up about 6 percent of the population enrolled in doctoral programs. Some university leaders blame the culture of recruitment for the lackluster numbers. “Everything has to be at scale or there’s no effect,” Arizona State University President Michael Crow said last year. He added that universities ”have to want to do that.” 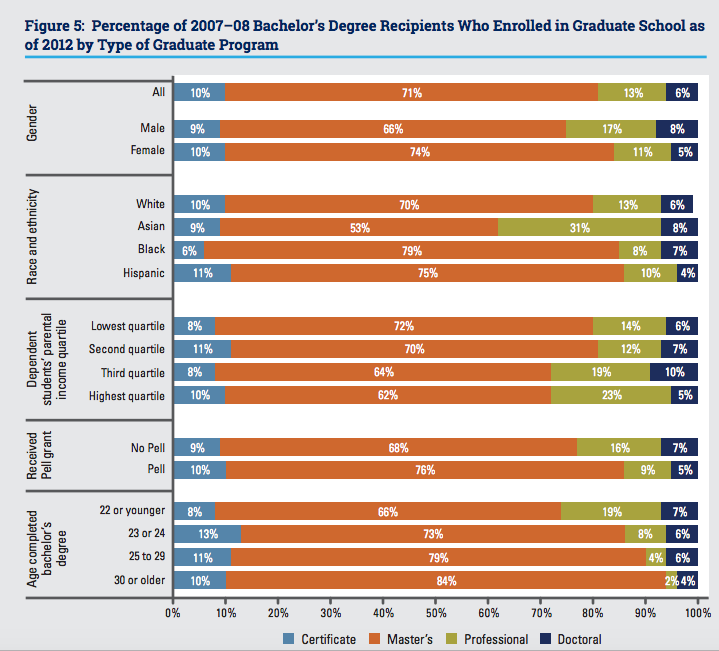 “There are all sorts of reasons why people from more affluent families would be more likely to go to graduate school,” said Baum. One may be that there’s more money around for higher-income students to enroll at the higher paying graduate programs. “Another reason is that they may have higher expectations about it,” she said. “If their parents went to graduate school, then going to graduate school seems like the normal thing to do.”

To be sure, graduate degrees – even the programs that don’t lead to six-figure incomes – typically are a financial win for the students who complete them. And unlike the debate of whether undergraduate educations increase a student’s skill set or merely signal to employers a competency that may or may not be warranted, “Graduate education is much more vocational (than undergraduate educations),” said Baum. “You are learning very specifically how to be prepared for an occupation.”

She added: “There are people who get master’s degrees in generalized fields and they get jobs in something else and certainly that credential has a signaling impact, but I would say that the vast majority of graduate degrees really are things that people use in their professions, and they’re required — not just as a signal.”

And though graduate students garner less public-policy focus than struggling high-schoolers or first-generation college students, the fact that disparities exist along racial and socioeconomic lines worries Baum. “It is a barrier to upward mobility,” she said.

Baum wonders whether a state or federal program could target Pell-eligible students while they’re in college to encourage them to pursue graduate programs that lead to some of the highest wages, like medicine and law. Creating a targeted program is tricky because by the time students have completed their bachelor’s, the typical telltale signs of financial need are gone because these students are full-blown adults who likely live independent of their parents.

Some graduates of business or law schools already can receive substantial indirect perks for the degrees they’ve earned. Through income-based repayment, which many student-loan borrowers are eligible for, high-flying graduates with master’s degrees in high-earning fields can benefit from lower payments and loan forgiveness if they’re working for government or nonprofit employers. “It doesn’t seem like the top of the social agenda to make sure we forgive those loans for those people,” Baum said.

Republicans and President-Elect Trump have proposed tweaks to the income-based repayment plan that may limit the benefits graduate students receive, though tax reform and Obamacare appear to be higher priorities on the incoming administration’s agenda.