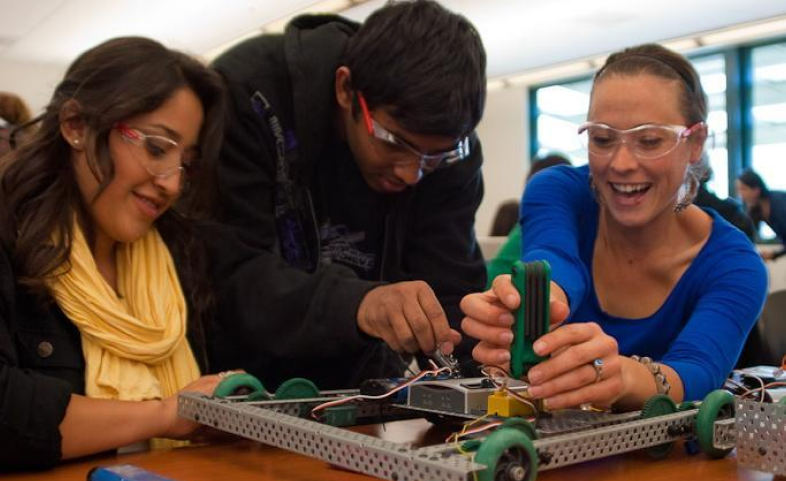 At Summit Public Schools campuses, you won’t see PowerPoint lectures on “Antigone” in English class or witness lofty explanations of the Pythagorean theorem in geometry anymore.

At Summit Public Schools campuses, you won’t see PowerPoint lectures on “Antigone” in English class or witness lofty explanations of the Pythagorean theorem in geometry. Instead, you’ll hear a discussion about the morals and ethics in the ancient Greek tragedy tied to students’ own teenage identity formation and observe discussions on how real-life problem-solving skills can be applied to math.

You’d see teachers as facilitators, with students at the center of their own learning, explained Adam Carter, the chief academic officer for the California-based network of charter schools.

At STEM Preparatory Schools’ two campuses in Los Angeles, comprised entirely of students of color, you’d see similar problem-solving and personal relevance incorporated into a curriculum focused on science, technology, engineering and math. CEO Emilio Pack described one year-long project in which five senior girls who have been victims of sexual assault or harassment are creating an app that will make it easier for other victims to get help.

Carter and Pack were panelists at an Education Writers Association conference at the University of Southern California last month, where they participated in a discussion focused on innovation in the charter school sector.

“We want kids to have the agency to be able to make choices about how they learn,” said Carter, whose network aims to foster a culture of innovation. “We want our educators to have the ability to support students as they go through that process.”

Charter schools have been around since 1991 and have grown both in number and enrollment in the last 25 years. But some observers, including former U.S. Secretary of Education Arne Duncan, say the charter sector has not delivered on its promise to become “laboratories of innovation.”

“Charters were supposed to be the research-and-development wing of public education — ‘incubators of innovation,’ in President Obama’s words. But they have yet to truly realize that potential,” Duncan wrote in the forward to the 2016 book, “The Founders: Inside the Revolution to Invent (and Reinvent) America’s Best Charter Schools,” by Richard Whitmire.

“With some notable exceptions, top-performing charters haven’t developed breakthrough innovations in the areas of personalized learning, technology, and competency-based learning,” Duncan wrote. “Nor, for the most part, have high-performing charters been in the vanguard of schools applying findings from the learning sciences to drive better instruction.”

The charter schools represented on the panel may well be among the exceptions, however. Whitmire said he would count both Summit and STEM Prep among what he calls the “3.0 charters.” This is the small set of high-performing schools, Whitmire explained in his book, “that can take poor and minority children and turn them into successful college graduates.”

The 3.0 wave started around 2011 when KIPP, a national network of charter schools, discovered that only 31 percent of their students were graduating with a four-year college degree within six years of high school, said Whitmire. As he wrote in his book, this was three times the graduation rate for low-income, minority students nationally but far less than what high-achieving charters like KIPP had expected to accomplish.

That was true for Summit, which opened its first school in 2003 with the goal that all students could be successful and have access to college. But after taking a closer look at the college graduation rate of the school’s first graduating class, they found that 55 percent of students were on track to get a four-year college degree within six years.

Staff tracked down students who had dropped out and discovered that, among other reasons, students had not been equipped with the noncognitive skills to direct their own learning. Learning from that data, Summit schools began to focus on skills-based learning, rather than simply content acquisition.

Opening the Door to STEM Careers

For STEM Preparatory Schools, which Pack founded, the goal from the get-go was to provide an education that would help change the narrative.

“To me it’s criminal that the highest paying jobs of the future are in STEM and there are virtually no minorities and minority females,” he said. “That was the premise. That was the problem we were trying to solve.”

Early signs show it’s working, too. Pack said 86 percent of black students and 84 percent of Latino students in the two-school charter network scored at grade level or above on the first round of Common Core assessments, and 70 percent of this year’s seniors who have been accepted to a four-year college plan to pursue a STEM major.

Ultimately, educational innovation is not defined in any fixed way. Whitmire notes that in the charter sector, “next generation” charters are often described as places that deliver “intense personalization,” usually carried out with the assistance of new technological tools.

He urged reporters to look beyond a school’s structure, teaching tools and strategies. Sometimes an innovative school will look “radically different,” Whitmire said, but sometimes not. For him, it’s about the intensive focus he sees at places like Summit Public Schools and STEM Prep on getting disadvantaged students to become more academically independent so they can succeed in college.

“To me, that’s the real innovation here,” he said.