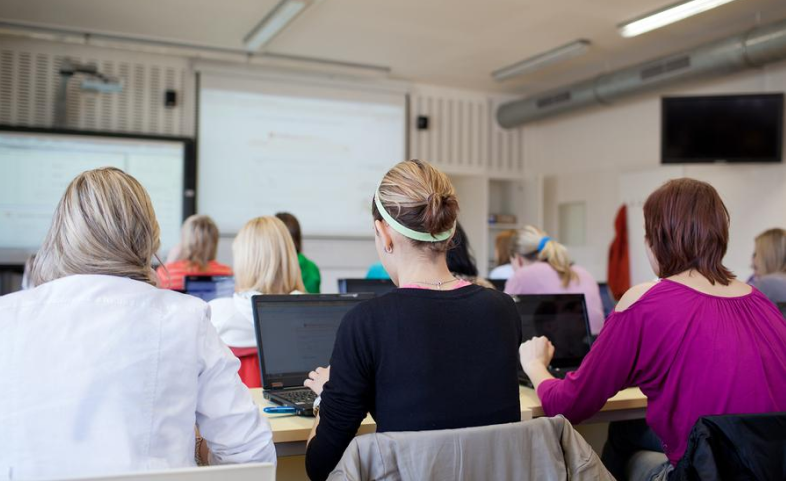 How Technology Is Reshaping the Modern College Classroom

The good and bad of online classes, AI in grading and accessibility.

Author: Amy Kolb Noyes of Vermont Public Radio for EWA
Back to Skills

Technological innovation, which has upended everything from the way we order lunch to how we find a life partner, is also revolutionizing education. Optical character recognition devices, artificial intelligence grading programs and powerful computers are profoundly remaking what goes on inside traditional college classrooms. In addition, about a third of college students are taking at least one course online.

Journalists who want to cover the impact of technology on higher education have a rich vein of story ideas to mine, said experts who spoke at the Education Writers Association’s 2019 Higher Education Seminar in September.

Technological innovations have slashed the costs of equipment such as televisions, services such as telephone calls and have enabled the development of free “MOOCs” (massive open online courses). However, innovation hasn’t translated into widespread reductions in tuition for for-credit programs at most traditional American colleges, noted Sandy Baum, a nonresident senior fellow at the Urban Institute and co-author of an early 2019 report on online education.

The speakers — an entrepreneur, researcher, student and analyst – suggested journalists investigate the effects of technology on improving or worsening:

What’s more, while online courses can be more convenient, since students don’t need to drive to campus and can do the work on their own schedule, they haven’t improved the educational or employment outcomes for disadvantaged students, Baum found.

She suggested that reporters who hear claims that online courses improve access to education ask: “Access to what?”

Artificial Intelligence has so far had a similarly mixed effect on education. AI tools such as educational games and scientific modeling programs are now being used to teach all kinds of subjects. And hundreds of colleges are using AI programs to grade tests and papers.

Peter Foltz, the vice president of cognitive computing for Pearson’s AI and Products Solutions and a research professor at the University of Colorado’s Institute of Cognitive Science, said tests show that AI can grade at least as accurately as a teacher.

But AI grading programs aren’t perfect, he conceded. Some can simply reinforce biases.

One example of a good use of AI in grading, he suggested: AI grades early drafts of an assignment to give students immediate feedback. However, he said the job of grading the final draft is typically done by a teacher.

“Computers can do faster feedback. Humans can do more nuanced feedback,” he said. “You want a little bit of both.”

Foltz cautioned against what he called the common trope of “computer replaces teacher.” His view: Computers are there to assist instructors, not replace them. “We always want to keep the human in the loop.”

Opportunities for the differently abled

New technology has been a boon to students with disabilities, said Khodr Farhat, a 2018 graduate of University of Michigan-Dearborn who is blind. For example, optical character recognition devices or apps (which can translate text into spoken words) have made just about all text accessible to blind students. And online courses can make education available to students who have difficulty traveling to and from campus.

But he said technological innovations haven’t yet removed all barriers to education. Some tools that can help students are still quite expensive.

Some teaching methods still aren’t accessible to all. No technological tool can help him understand images or drawings a teacher might make on a blackboard, for example.

Farhat said courses of all types will only get much more accessible if instructors take accessibility into account at the very start — when they are designing their curriculum or course.

The future: “Blending” and debates over regulation

John Katzman, currently the founder and chief executive officer of Noodle Partners, who also founded The Princeton Review test prep company and online course provider 2U, said research shows that online or virtual material can significantly improve outcomes when it is included in a course taught by a human instructor who makes sure students get lots of personal attention and interaction.

“The question of faculty interaction is, I think, a critical one,” Katzman said.

As technology continues to change education, that question is likely to become ever more critical. Human instructors are, of course, more expensive than software programs.

U.S. Secretary of Education Betsy DeVos continues to dismantle regulations that targeted online for-profit colleges. Instead, the federal agency has been ramping up the release of cost and outcomes data for all types of college programs to empower students to become more knowledgeable consumers, and thus presumably drive low-performing programs out of business. But it is unclear if such market-based economic analyses will be enough to drive the kinds of improvements needed to improve higher educational access, quality and affordability.

“If I could have one thing, it would be serious regulation about how we market higher ed,” he said.

While the panel offered differing points of view, the speakers agreed that technology is playing a vast role in reshaping the modern college classroom and that we’re only beginning to tap into the potential improvements technology can offer, if applied thoughtfully and intentionally.