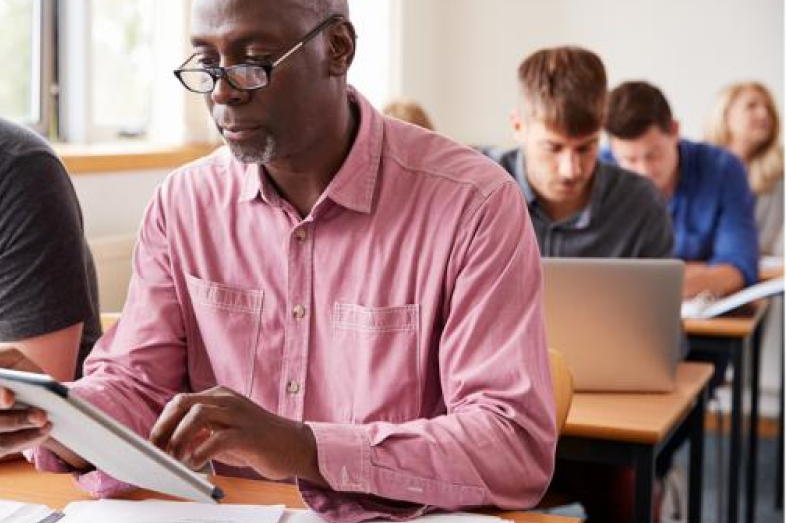 Although adult learners are often assumed to be rarities on college campuses, adults have always been an important part of the student body. And as the job market increasingly demands workers with more postsecondary training and America faces the results of a “baby bust” starting in 2008, adult students have become crucial players in improving the economy and keeping colleges financially viable.

Back to Adult Learners

Although adult learners are often assumed to be rarities on college campuses, adults have always been an important part of the student body. And as the job market increasingly demands workers with more postsecondary training and America faces the results of a “baby bust” starting in 2008, adult students have become crucial players in improving the economy and keeping colleges financially viable.

Unfortunately for journalists, there’s no official definition of an “adult” student. But the U.S. Department of Education considers any student over the age of 24 as “independent” for financial aid purposes. And the department breaks out statistics for those 25 and over in its age grouping tables in its Integrated Postsecondary Educational Data System (IPEDS). As of 2019, those over the age of 24 comprised 6.5 million students, about a quarter of all undergraduates and three-quarters of graduate students.

But many people think the definition of adult student should be broader. The federal financial aid program also considers as independent those who may be under 25 but are veterans and/or parents.

And the adult-learning scholar Carol E. Kasworm has suggested that the definition of an adult student should center on their financial independence, commitments to family and work, and a personal identity “that is not predominantly anchored in the role of a college student.” This broader definition is sometimes also referred to as “non-traditional” or “post-traditional” or “today’s” students.

However you define them, adult students are a very diverse group, including displaced workers trying to prepare for a new career, employees taking advantage of tuition assistance programs, people returning to college to finish a credential, and those who took years — or decades — to decide to start college.

While it’s generally believed that most adult students enroll or return to college to improve their career prospects, many are also motivated by personal considerations, what the historian David Scobey has called “a journey of personal growth, a way of laying claim to their lives.”

And this group is fertile ground for fresh and important coverage. As the makeup of the student body changes and more adults enroll, government programs and campuses will have to adapt.

Among the fruitful areas for journalists exploring this topic are efforts to change “traditional” campuses or educational programs to better serve adults by, for example, expanding financial aid eligibility, making class schedules more convenient, improving services such as child care, and — who knows — maybe even taking the radical step of providing more affordable parking spaces. (More story ideas are listed below.)

To help you cover this increasingly important part of higher education, check out the following modules, which provide important background on adult learners, as well as resources, data and links to research.

Share
Related Issues
Data/Resources: Adult Students
These organizations, resources, and reports offer useful information and sources for reporting on the issues affecting adult students.
History and Background: Adult Students
In the U.S., the mass effort of providing post-secondary education to adults started with the land grant public college movement in 1862.
Glossary: Adult Students
Following are some of the terms that come up in reporting on adult students.
Adults at College: 8 Great Story ideas
8 great story ideas to inspire you!
Load More